Congress races to act on Iran after Bibi's speech

The Senate is to take up a bill demanding a say on the nuclear deal next week. 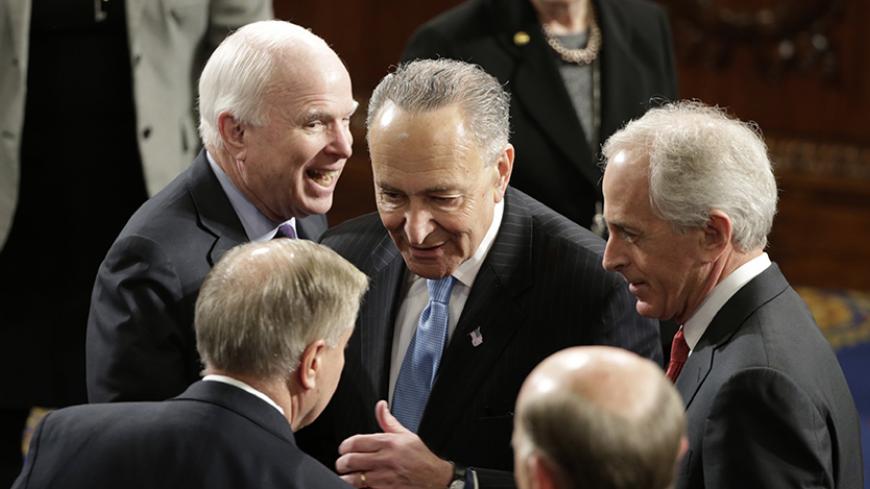 "This morning Prime Minister [Benjamin] Netanyahu laid out a threat posed by a nuclear Iran in very clear terms, not just to Israel, not just to the United States, but to the entire world," McConnell said March 3 on the Senate floor.

"Remember, it was Congress that helped bring Iran to the table by putting sanctions in place, actually against — against — the wishes of the administration. Congress was right then and Congress and the American people need to be a part of this discussion, too. That's why I'm acting to place this bipartisan bill on the legislative calendar ... Congress must be involved in reviewing and voting on an agreement reached between this White House and Iran, and this bill would ensure that that happens."

The rush to action comes after Netanyahu urged lawmakers to reject what he called the "very bad deal" under negotiation. Concurrently, thousands of members of the pro-Israel lobby American Israel Public Affairs Committee visited congressional offices during the last day of the organization's annual policy summit.

Netanyahu objected to letting Iran keep its nuclear infrastructure and lifting sanctions before the country abandons terrorism and its anti-Israel rhetoric. He predicted that the Iranians would return to the table "because they need the deal a lot more than you do," but offered no real alternative to the current talks.

"By maintaining the pressure on Iran and on those who do business with Iran," he said, "you have the power to make them need it even more."

The White House has promised to veto the Corker bill, which has been endorsed by five Democrats and an independent.

"The president has been clear that now is not the time for Congress to pass additional legislation on Iran," National Security Council spokeswoman Bernadette Meehan told Al-Monitor. "If this bill is sent to the President, he will veto it. We are in the final weeks of an international negotiation. We should give our negotiators the best chance of success, rather than complicating their efforts."

"The alternative that the prime minister offers is no deal, in which case Iran would immediately begin once again pursuing its nuclear program without us having any insight into what they're doing, and without constraint," Obama said. "And his essential argument is that if we just double down on sanctions, then Iran won't want to do that. Well, we have evidence from the past decade that sanctions alone are not sufficient to prevent Iran from pursuing its nuclear ambitions."

Still, Republicans appeared re-energized, demanding a vote not only on the Corker bill but also on bipartisan sanctions legislation that would kick in if there's no deal by July 6.

"Prime Minister Netanyahu is right to argue that the clear alternative to a bad deal is a better deal with Iran that only lifts crippling pressure on the Iranian regime when it stops its nuclear weapons program, stops aggression against its neighbors, stops supporting terrorism and stops threatening to annihilate Israel," said Sen. Mark Kirk, R-Ill., co-author of the sanctions bill along with Sen. Robert Menendez, D-N.J. "The best way to get a better deal is for Congress to keep up the pressure on Iran through the Kirk-Menendez legislation.”

Sen. Marco Rubio, R-Fla., agreed. "Congress should pass additional sanctions on Iran as soon as possible," the prospective 2016 presidential candidate said in a statement, "and it should also ensure that any deal is submitted to Congress for a formal review."

The rush to action, though, could cause prospective Democratic support for the congressional review effort to collapse.

"Frankly, this is not what was intended and it certainly is against my better judgment, against procedure, against any understanding we might have had to take the politics out of our effort to establish congressional oversight of any nuclear agreement with Iran," Menendez, the top Democrat on the Senate Foreign Relations Committee and an original co-sponsor, said on the Senate floor. “I am more than disappointed. I’m outraged."

"Premature action ... disrespects the ongoing work to build a broad coalition of colleagues in support of this bill," Kaine said in a statement. ​"Congress should weigh in on any Iranian nuclear deal that impacts the statutory sanctions we've enacted. But we need to demonstrate that our review will be thoughtful and deliberate rather than rushed and partisan.”

Sen. Ben Cardin, D-Md., a member of Corker's panel, said he supported the "substance" of the Corker bill but that a vote next week would be "unfortunate."

"I hope [Corker] doesn't do that," Cardin told Al-Monitor. "I think that's a mistake ... In three weeks, with negotiation at the point where it is, it doesn't make sense to change the ground rules. It is clear that Congress must have a role in this. We have to deal with the sanctions, because they're statutorily based. We have a role. We're going to have a role."

Fellow panel member Tom Udall, D-N.M., said the rush to a vote violated the usual process. "The Foreign Relations Committee has always worked in a real bipartisan way," Udall said. "I just think this isn't a good way to go about it."

Sen. Barbara Boxer, D-Calif., said she may try to introduce an alternative she's been working on as an amendment to the Corker bill. She had been working with Sen. Rand Paul, R-Ky., but he ended up co-sponsoring the Corker bill March 3. "We've had 10,000 of these executive-negotiated international deals," Boxer told Al-Monitor. "As far as I can tell, I can't find anywhere Congress demanding a vote. It's completely nonproductive to do that. You would never get anything done — you would have 536 presidents."

Some lawmakers said the congressional rush to act just weeks before the end of March deadline for a political framework agreement had nothing to do with Netanyahu's speech.

"It was good to hear it," Sen. Jim Risch, R-Idaho, told Al-Monitor, "but it didn't move us any more [to act] — we were already moved sufficiently."