The Senate Foreign Relations Committee insists the bill it cleared May 25 doesn’t violate the nuclear deal. 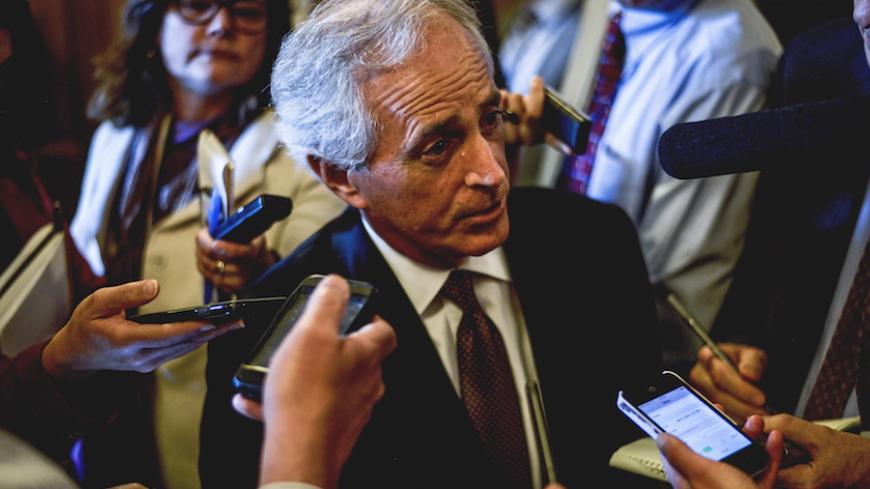 US Sen. Bob Corker, R-Tenn., speaks to reporters at the US Capitol in Washington, April 21, 2015. - REUTERS/James Lawler Duggan

The modifications are the latest example of the broad but discreet bipartisan commitment to keeping the much-maligned Joint Comprehensive Plan of Action (JCPOA) in place even while tightening non-nuclear sanctions on Iran. The revised bill ended up passing 18-3, with even outspoken nuclear deal advocates such as Sens. Chris Murphy, D-Conn., and Tim Kaine, D-Va., voting in favor.

“The Iranian regime, and its clients and proxies, should take from this legislation that while we will continue to fulfill US obligations pursuant to the JCPOA … we remain committed to pushing back on Iran’s ballistic missile program, support for terrorism, violations of the arms embargo, and human rights abuses against its own citizens,” the panel’s top Democrat, Sen. Ben Cardin, D-Md., said in a statement after the vote.

The bill was co-authored by panel chairman Bob Corker, R-Tenn., and Sens. Robert Menendez, D-N.J., with input from Cardin. It would impose mandatory sanctions on persons involved with Iran’s ballistic missile program and arms transfers, and apply terrorism sanctions to the Islamic Revolutionary Guard Corps (IRGC).

The effort follows several Iranian ballistic missile launches and repeated warnings by the Donald Trump administration about further pressure on Iran. For pro-deal Democrats, the bill is a way to both hit back against Iran for behavior deemed belligerent while potentially restricting the Trump team’s ability to craft its own sanctions that could wreak havoc with the nuclear deal.

The bill prompted an all-out push from former Obama administration officials worried that it would violate the terms of the nuclear deal, which all Republicans voted against. Lawmakers and staffers held several conversations with them over the past several weeks, most notably Adam Szubin, the acting under-secretary for terrorism and financial intelligence in Obama’s Treasury Department.

“Szubin is somebody we have always respected,” Corker told Al-Monitor. “He’s been in my office. And we have a very close relationship with him. We thought some of his points were not correct, but we did think some of them were appropriate to be addressed.”

Chief among these was a change in Section 8 of the bill, which initially called for a certification that entities not engage in Iran’s ballistic missile program for 90 days before sanctions can be removed. The nuclear deal, however, calls for the removal of UN ballistic missile sanctions after eight years, and some worried that the 90-day provision created a new standard; that provision is now gone, replaced with a presidential “review” of the sanctioned entities’ conduct.

“The architects of the JCPOA felt that that could be interpreted as an additional requirement that was not in the JCPOA,” Cardin told Al-Monitor. ”So we eliminated that.”

Another point of contention is the extension of terrorism sanctions on the IRGC. Corker insisted that the bill doesn’t designate the entity as a terrorist group, but some argue that the practical impact is the same. An amendment to remove the provision by Sen. Tom Udall, D-N.M., failed 17-4.

Udall was one of only three senators, along with Rand Paul, R-Ky., and Jeff Merkley, D-Ore., to vote against the revised bill.

Paul said the idea that more sanctions would lead Iran to stop its ballistic missile program while the United States is getting ready to sell $110 billion worth of weapons to its regional rival Saudi Arabia was a “fool’s errand.” He said Riyadh has similar weapons aimed at both Israel and Iran, evidence of which was spelled out in a 2013 report by Britain’s Telegraph newspaper.

“If we really, really wanted to get rid of their ballistic missile program, we should look at who else in the region they may perceive as a threat,” Paul said.

Hours later, he, Murphy and Sen. Al Franken, D-Minn., introduced legislation that would bar the United States from selling precision-guided munitions to Saudi Arabia because of concerns they will be used carelessly in Yemen.

Just last week, key Obama officials involved in the deal, including former Secretary of State John Kerry, launched Diplomacy Works, a task force to defend the deal amid pushback against Iran from the Trump administration and Congress. The changes appeared to alleviate some of the group’s concerns.

“Diplomacy Works and other advocates of the [JCPOA] applaud some of the amendments made to the bill, but concerns remain that certain provisions carry unnecessary risks to the agreement,” the group said in a statement after the bill’s passage. “As Congress considers bills that move to address Iran's other negative behaviors, members should carefully consider implications to the JCPOA, since these other actions are better addressed in the absence of a nuclear-armed Iran.”

The bill could come up for a floor vote as soon as next month, a Corker aide said.