Congress sets up first showdown of the year over Iran deal 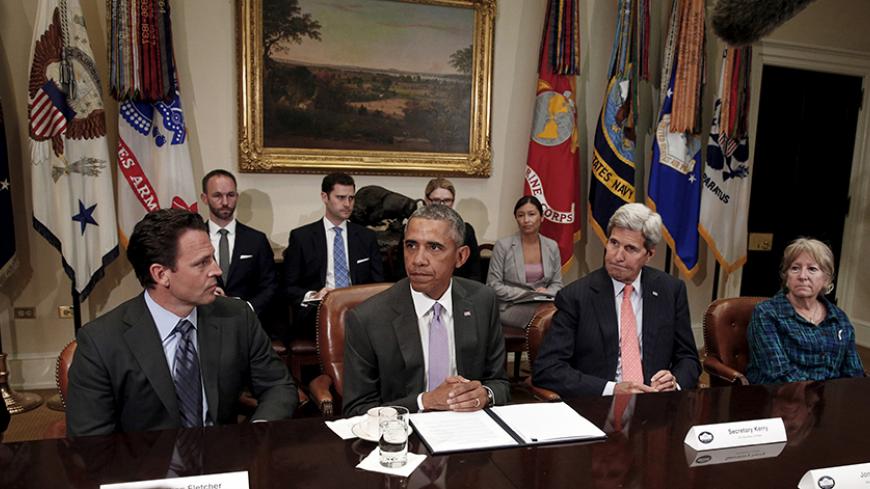 US President Barack Obama, with Secretary of State John Kerry, meets with a group of veterans and Gold Star Mothers to discuss the Iran nuclear deal at the White House in Washington, Sept. 10, 2015. - REUTERS/Kevin Lamarque

The Obama administration tells Al-Monitor that it "strongly opposes" an Iran sanctions bill that is scheduled for an initial vote this week, setting the scene for the first of what promises to be a long list of showdowns over Iran policy in 2016.

The House Foreign Affairs Committee on Jan. 7 is set to mark up legislation from Rep. Steve Russell, R-Okla., that would restrict the administration's ability to lift sanctions on Iranian financial institutions as called for under the Iran deal. Administration officials say the bill is a transparent attempt to derail the Joint Comprehensive Plan of Action (JCPOA).

"We’re aware of this draft legislation, and as we have long said, we are opposed to any legislation that interferes with the implementation of the JCPOA," a senior administration official told Al-Monitor via email. "From what we have seen of this bill, it would interfere with the implementation of the JCPOA, and therefore, the administration strongly opposes it."

The bill would require the administration to certify that Iranian financial institutions have not knowingly helped fund Iran's Islamic Revolutionary Guard Corps, foreign terrorist organizations and several other entities before they can be removed from the Treasury Department's list of specifically designated nationals. The Iran deal requires that the United States cease its nuclear-related sanctions on those banks as part of its obligations under Annex II of the deal.

"It means that we can't do the deal," said Richard Nephew, a former principal deputy coordinator for sanctions policy at the State Department, now with Columbia University's Center on Global Energy Policy. "I think it's written with the deliberate intention of making it such that we cannot delist the banks that are supposed to be delisted."

The committee counters that the bill's goal is to "ensure the administration does not lift sanctions against individuals involved in Iran’s ballistic missiles program or terrorism," according to a markup schedule. Republicans — and not a few Democrats — are incensed at the administration's failure to sanction Iran for recent missile launches and have vowed to do all they can to keep punishing Iran for its support for terrorism and other activities.

"We’ve ended up with the president negotiating a deal here which has to be enforced now," committee chairman Ed Royce, R-Calif., told reporters in a year-end press conference last month before leaving town for the holidays. "And we don’t see the intention at this point on the part of the administration with respect to a will to enforce. And this will be a key issue next year.”

The procedure and timing of this week's action, just days into the new year, suggests deal skeptics are scrambling to try to tie the administration's hands before sanctions are lifted on implementation day, which could happen as soon as this month. Sanctions bills are typically worked out between Royce and his Democratic counterpart, New York Rep. Eliot Engel, but in this case the bill being marked up was introduced by a committee outsider (Russell sits on the armed services and oversight panels) and hasn't been endorsed by a single Democrat — or even by Royce himself.

"It's disappointing, but I suspect the Republican leadership came down from high," Engel told Al-Monitor. "This is not a serious attempt. This is an attempt to play partisan politics with a very serious issue, and I don't want to be a part of that."

Russell's bill is theoretically retroactive — it would apply to President Barack Obama's actions going back to July 19 — but it's not clear that would survive a challenge by the administration. The congressman's office told Al-Monitor that he hopes to get a floor vote on the bill shortly; no companion bill has yet been introduced in the Senate.

"Congressman Russell has been working with leadership on the timing of this bill, and we hope to see it come to the floor soon," a Russell spokesman said via email.

Advocates of the Iran deal say some of the financial entities that are supposed to get relief under the deal were sanctioned specifically because of their ties to some of the actors designated by Russell's bill, making the certification impossible.

The bill "would effectively bar the president from lifting sanctions on Iranian banks in ways that would contradict US obligations under the JCPOA," Tyler Cullis of the pro-deal National Iranian American Council argues in an email to Al-Monitor. "It would do so by mandating the president to certify that the Iranian banks had not provided financial services to designated Iranian entities, despite the fact that such banks were themselves designated for precisely doing such."

Cullis also raises concerns with a section of the bill that would give lawmakers the ability to review — and potentially void — administration licenses for the export of certain products to Iran.

"Some in Congress have grown concerned over the powers currently enjoyed by President Obama to lift sanctions on Cuba and Iran and signaling their intent to limit those powers in future," he told Al-Monitor. "This provision would allow Congress an effective veto over any presidential modifications to the US’s trade embargo with Iran, which highlights the serious concern by Iran hawks that the nuclear agreement foreshadows a broader rapprochement between the US and Iran."

Nephew predicted such bills will keep popping up even after implementation day.

​"I fully expect that there will be challenges to the JCPOA by skeptics in Congress for the entire life of the JCPOA," he said. "Are they trying to tie [the president's] hands? Sure. Will they be trying to tie his hands in a couple of months? Sure. This is the life we now lead."