Is this the beginning of the end for the Iran deal?

Proponents of the nuclear pact fear the worst under a Trump administration. 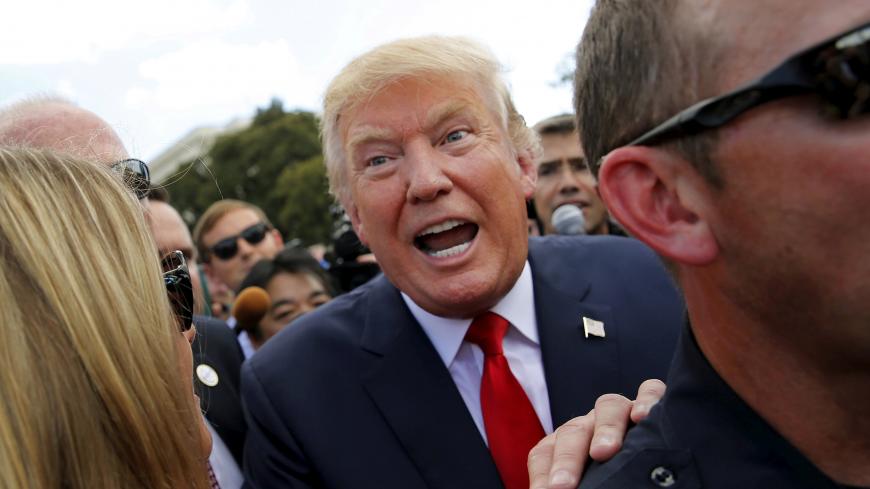 Many wonder whether President-elect Donald Trump will take action to kill the Iran nuclear deal. Here, Trump makes his way through a crowd after addressing a Tea Party rally against the deal at the US Capitol in Washington when he was trying to win the Republican presidential nomination, Sept. 9, 2015. - REUTERS/Jonathan Ernst/

Advocates of the nuclear deal with Iran are convinced the pact is in mortal danger following Republican Donald Trump’s upset election.

Deal skeptics on Capitol Hill have already prepared a raft of bills that have a far better chance of making it into law with the threat of a White House veto now out of the way. But the president-elect himself can just as easily send what he’s called a “disastrous” deal to the dustbin of history by simply refusing to sign off on sanctions relief.

“That’s why I find it so hard to believe that the deal survives,” said Richard Nephew, a former State Department sanctions official who now heads the program on Economic Statecraft, Sanctions and Energy Markets at Columbia University. “At some point, [Trump] will have to make an affirmative decision to support its implementation.”

Under the deal, the United States isn’t scheduled to provide additional sanctions relief until October 2023, well into a second Trump term. But the deal does require the president to periodically extend waivers on sanctions that remain on the books, as long as Iran abides by its obligations under the deal.

Iranian officials rushed to reassure the world that they remain wedded to the deal. Iranian President Hassan Rouhani told his Cabinet after Trump’s election that the deal “cannot be overturned by one government’s decision.”

Tyler Cullis, a policy associate with the National Iranian American Council (NIAC), said Tehran is all but certain to test an incoming Trump administration.

“You can’t forget that Iran tends to do dumb things that ignite political firestorms here in Washington,” Cullis said.

Indeed, just hours after Hillary Clinton conceded defeat, the International Atomic Energy Agency (IAEA) announced that Iran had exceeded its threshold for heavy water allowed under the deal. While relatively minor, such a violation could imperil the deal if a Trump administration dismantles the State Department and National Security Council teams that were put in place to prevent disagreements between the two longtime foes from spiraling out of control.

A Trump administration is also unlikely to reassure foreign banks that they can do some business with Iran without falling short of the deal. Already, Iran has been complaining that it is not seeing the promised benefits from the deal because the international financial system is wary of US regulators.

Lawmakers have introduced a rash of Iran sanctions bills ahead of the election, both to score points with voters back home and to put political pressure on the Obama administration not to go too far with sanctions relief. Cullis said he now expects the incoming, Republican-controlled Congress to introduce less extreme legislation that may not blatantly violate the deal but could irretrievably harm it.

The pro-Israel lobby AIPAC “will thread that needle,” Cullis predicted. “And then you’re going to have a bill that’s going to be very tough for Democrats to vote against.”

Theoretically, the defeat of deal foes Mark Kirk, R-Ill., and Kelly Ayotte, R-N.H., helps provide Democrats with a firewall to defeat problematic Iran bills (most bills need 60 votes to pass, and the Republicans will have 52 Senate seats if they win a Dec. 9 run-off in Louisiana). On the flip side, deal opponent Chuck Schumer, D-N.Y., is taking over as minority leader, adding to advocates’ distress.

“I think you’re going to see a much more measured approach from Republicans to knock a hole in it,” Cullis said. “And if a bill like that passes, it’s certainly the case that a President Trump will not spurn it, and he will sign it. It will cause immense damage to the sustainability of the nuclear deal.”

One such bill is S. 3267 from Senate Foreign Relations Chairman Bob Corker, R-Tenn., which has garnered seven co-sponsors, including Democrats Robert Menendez of New Jersey and Joe Manchin of West Virginia. AIPAC has lobbied for the bill, which would notably grant the incoming administration new power to designate Iranian entities and individuals for cyber, ballistic missile and other non-nuclear sanctions.

“A Trump administration will be less reluctant to utilize those authorities,” Cullis said. “It’s a strange thing to say, but I think Donald Trump will be one of the more sane voices in a Trump Cabinet.”

Potential candidates for the secretary of state post include former Ambassador to the UN John Bolton, who publicly advocated bombing Iran’s nuclear installations during last year’s negotiations. Cullis sees Trump outsourcing much of his administration’s Iran policy to his Cabinet, potentially empowering such hard-liners.

“Iran's behavior has become significantly worse since the #IranDeal,” Bolton tweeted last week, adding, "Another reason why we can't have a third term of Obama's administration.”

While the Trump administration will likely put pressure on Congress to pass more sanctions bills, Nephew predicted the reverse will also happen: Lawmakers touting their freshly passed bills to their constituents will likely demand that the Republican president use new powers given to him against Iran.

Ironically, deal advocates are latching on to Trump’s past inconsistencies for slight comfort.

In a CNN interview last summer, he lamented the “stupidity” of the nuclear pact and said the United States should “double up and triple up the sanctions and have them come to us.” In a September 2015 interview, however, he clarified that he would not rip up the pact upon taking office. “We have a horrible contract, but we do have a contract,” he told MSNBC.

In that same interview, the president-elect took issue with US businesses being shut out of the Iranian market under the deal.

“You see Russia selling missiles, and Germany’s involved,” Trump said at the time. “Everybody’s involved now with Iran selling them stuff. We’re probably [going to] be the only ones that won’t be selling them anything.”

Cullis said NIAC and others have floated the idea of trying to get Obama to open up Iran to US businesses during his last days in office as a way to appeal to Trump the businessman. But Nephew said doing so would take too long and not be in keeping with Obama’s stated desire for an orderly transition.

Nephew said the election offers Trump and Republicans a chance to prove they could have negotiated a better deal. But he predicted that the more likely scenario will see the United States and Iran revert to a dangerous game of chicken rather than getting Iran to give up its nuclear program.

“Rouhani is supposed to be elected in May,” Nephew said. “If he were to agree to that, he would not just not be elected, he would probably be shot.”