Lawmakers hope to have bipartisan legislation ready when thousands of pro-Israel advocates descend on Capitol Hill next week. 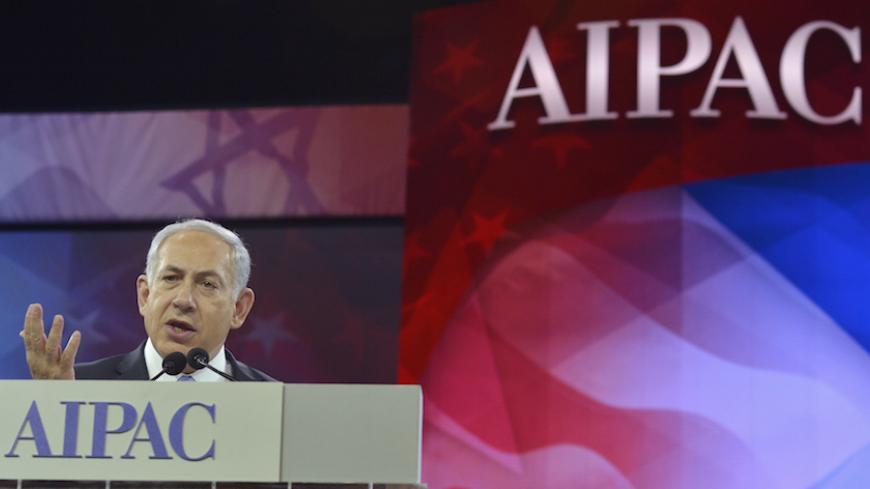 Key lawmakers in the House and Senate are racing to craft bipartisan Iran sanctions legislation before the nation’s largest pro-Israel lobby holds its policy conference starting this weekend, March 26.

The annual gathering of the American Israel Public Affairs Committee (AIPAC) offers an ideal environment for congressional action as thousands of eager activists descend on Capitol Hill on March 28. With barely a week to go, the relevant Senate panel remains deadlocked while its House counterpart hopes to shortly strike a deal, according to multiple sources in Congress and pro-Israel groups.

The top Democrat on the House Foreign Affairs panel, Rep. Eliot Engel, D-N.Y., told Al-Monitor last week he has “confidence” he can hammer something out with Chairman Ed Royce, R-Calif.

“We’re still negotiating it, and like everything I do with the chairman I’m hopeful we’ll have a meeting of the minds,” Engel said. “It won’t take forever.”

Meanwhile in the Senate, Democrats have yet to coalesce around a single vision that can get the backing of Foreign Relations Chairman Bob Corker, R-Tenn. The top Democrat on the panel, Sen. Ben Cardin, D-Md., is insisting that any sanctions bill preserve President Barack Obama’s nuclear agreement, while his more hawkish colleague Robert Menendez, D-N.J., is publicly signaling that he’s ready to make the necessary concessions to get a deal done.

Cardin told Al-Monitor that he’s pushing for a “strong bill” that’s “consistent” with the Joint Comprehensive Plan of Action. He indicated that one remaining topic of dispute is how much leeway the Donald Trump administration and future administrations should have in waiving congressionally mandated sanctions.

“Congress can be directive, but you’ve got to give the president national security flexibility,” Cardin said.

The Senate bill is expected to contain non-nuclear sanctions that were included in last year’s compromise between Corker and Menendez, according to an official with a pro-Israel organization. That bill never made it out of committee after Cardin declined to endorse it, but Menendez says he’s now willing to meet Cardin partway.

“As a matter of fact, I [told] Sen. Cardin today that I wanted to talk to him at length about how we ultimately come together,” Menendez told Al-Monitor on March 15. “And I have been talking to other Democrats on it. I’m not ready to say we’re not going to reconcile whatever views we originally had. I’ve obviously moved a little bit from last year’s piece of legislation in building broad bipartisan support.”

The bill may also incorporate several provisions related to Iran’s ballistic missile program that were included in legislation last year from Sen. Kelly Ayotte, R-N.H., who has since lost re-election. The missile issue remains a top priority for AIPAC and Congress, especially after Iran’s recent missile tests and the Trump administration’s subsequent sanctions orders.

“The United States must integrate these sanctions into a comprehensive strategy toward Iran,” AIPAC argued in a February policy memo. “The administration must work aggressively to identify additional entities involved in Iran’s missile program and sanction those supporting these entities, including financial and transportation companies.”

The House bill, meanwhile, is expected to focus more specifically than its Senate counterpart on Iran’s human rights violations, the pro-Israel source said.

The internal congressional politics have left AIPAC lobbyists discreetly pushing both parties to compromise and avoid a repeat of the highly partisan Iran deal debate of 2015. The organization’s latest Iran-related legislative push was for renewal of the Iran Sanctions Act, which passed both chambers overwhelmingly late last year.

Even if Congress can’t compromise in time on Iran, AIPAC advocates will have other priorities to lobby for.

These include legislation from Sen. Marco Rubio, R-Fla., that empowers state and local governments to avoid doing business with entities that support the boycott campaign against Israel. AIPAC is also pushing Congress to adopt Defense spending legislation that sets aside $601 million for US-Israel missile defense. That bill cleared the House earlier this year but faces uncertain prospects in the Senate, where many Democrats are worried about Trump’s budget priorities.

Intel: US announces Iran, Syria sanctions ahead of democracy summit