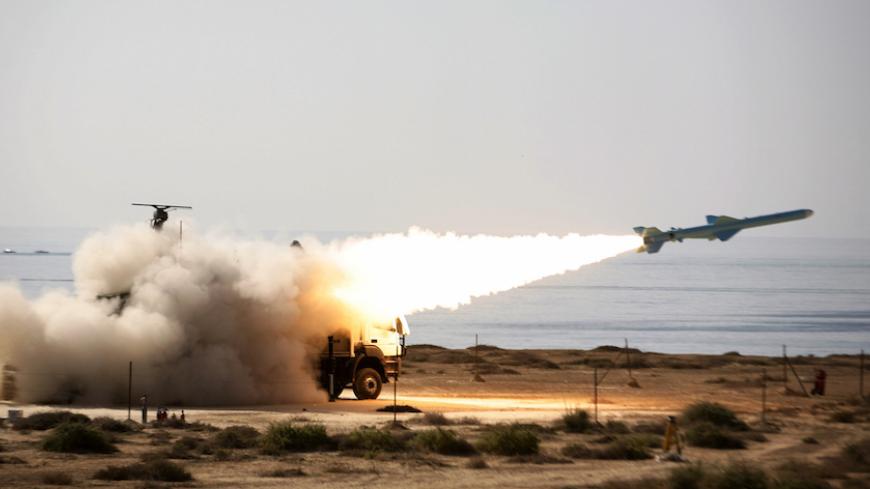 An Iranian long-range shore-to-sea missile called Qader (Capable) is launched during Velayat-90 war game on the Sea of Oman's shore near the Strait of Hormuz in southern Iran, Jan. 2, 2012. - REUTERS/Jamejamonline/Ebrahim Norouzi/Handout

Congress is ramping up its efforts to slap new sanctions on Iran after the country said it conducted multiple ballistic missile launches in defiance of US and international sanctions.

Senate Foreign Relations Committee Chairman Bob Corker, R-Tenn., met with his aides hours after the March 8 announcement to discuss the potential content and timing of legislative action. He and panel member Robert Menendez, D-N.J., have been working for the past month on multi-pronged sanctions legislation and said the latest reports out of Tehran were an incentive to kick things up a notch.

"It just means that it's more urgent that we get unified American leadership and international support," agreed Sen. Ben Cardin, D-Md., the top Democrat on the panel, who introduced his own legislation on the issue last fall.

Congressional impatience is fueled in part by the Obama administration's perceived lack of response to the missile launches. The Treasury Department in January designated 11 entities and individuals linked to Iran’s ballistic missile program after Tehran conducted two tests last year, but lawmakers say the administration needs to be prodded to do more.

Senate Armed Services Committee member Kelly Ayotte, R-N.H., called the latest sanctions "pathetic and weak" and said they were having "absolutely no impact." "I would hope" that the United States will impose tougher sanctions on Iran's ballistic missile program, she said during a March 8 hearing with Centcom Commander Lloyd Austin.

The Obama administration has indicated no such rush.

White House spokesman Josh Earnest said the administration is looking into the launches but that it was "too early to determine" if they were a violation. He said the United States would bring the issue to the UN Security Council if called for.

"It certainly is possible that Iran could face some consequences for carrying out this action," Earnest said at his daily press briefing. "And we have demonstrated no reluctance to impose sanctions against Iran for conducting ballistic missile tests that are outside of their international obligations."

Despite broad bipartisan support for more action, lawmakers have so far been stymied by fallout from the nuclear deal with Iran. While the Joint Comprehensive Plan of Action does not preclude the imposition of non-nuclear sanctions, the Obama administration has warned against legislative efforts that Iran may interpret as violating the spirit of the agreement.

Lawmakers have been moving to reauthorize legislation targeting Iran's energy sector, the Iran Sanctions Act (ISA), which expires at the end of the year. Republicans and hawkish Democrats, however, are already looking past that bill toward legislation aimed at enforcing restrictions on ballistic missiles as well as the sale of conventional arms.

"It may very well be that ISA reauthorization on its own, which I support, may not be enough for many members of the Senate and they'll be looking for other opportunities," Menendez told Al-Monitor. "And in my mind, something that could be reasonably negotiated would be preferable than just an amendment process that could open the doors to things that aren't necessarily thoughtful."

The comments are an implicit acknowledgment that lawmakers are having a tough time bridging the gap between opponents and supporters of the deal. Corker and Menendez are trying to thread the needle and come up with the strongest possible language that can survive a potential veto by the administration while avoiding additions from hard-line Republicans that could kill the whole effort.

"If we want to send a clear message that because we struck a nuclear agreement with them doesn't mean that they can promote terrorism, export or proliferate ballistic missile technology, that they can violate human rights, that they can destabilize the region, then there have to be actions that ultimately send them that message, and that's what I'm working on," Menendez said. "It will deal with those different categories, and it will deal with them in ways that if Iran continues to violate them, then [we would be] starting off with US consequences and then hopefully, as we have in the past, try to internationalize those consequences."

Cardin said he expects the administration to eventually get on board if lawmakers can produce a bipartisan bill.

"I've never had a president or an administration who welcomed Congress getting involved in areas where they can act unilaterally — they would rather have their discretion; it's normal," he said. "I think Congress would be more prescriptive. And I think they'll agree with us at the end of the day."