Iran hawks lay out their wish list for Trump era

Outright repeal is out, sanctions and military pushback are in. 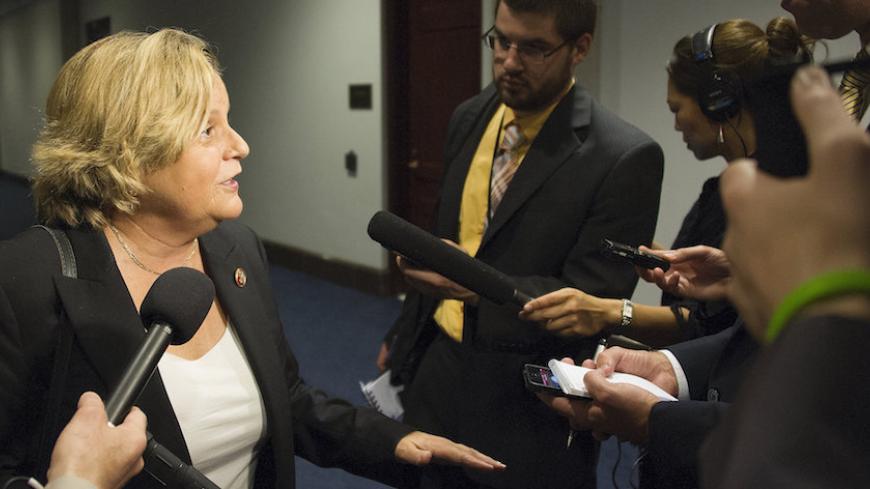 Iran hawks on and off Capitol Hill laid out their clearest wish list to date for the next four years during a Dec. 7 briefing.

Lawmakers and outside experts agreed that President-elect Donald Trump would be unwise to rip up the nuclear deal on day one. Barring that, however, the bipartisan group of panelists encouraged him to challenge even minor technical violations of the deal, slap sanctions on thousands more Iranian companies and send Iranian vessels that challenge the US Navy to the bottom of the Persian Gulf.

“It’s clear we’re about to enter a new phase of Iranian sanctions,” said Rep. Ileana Ros-Lehtinen, R-Fla., the chairwoman of the House Foreign Affairs panel on the Middle East. “We will see a flurry of Iran-related activity early in the new year. I think we have an opportunity to undo a lot of the problematic concessions that we have seen over the past few years. And. I. Can’t. Wait.”

Ros-Lehtinen was the keynote speaker at the briefing organized by United Against Nuclear Iran (UANI), which lobbied against the deal in 2015, and the hawkish Foreign Policy Institute. She laid out a three-pronged approach that consists of “enforcing current sanctions, expanding the other non-nuclear related sanctions and perhaps even rolling back or tightening provisions of the JCPOA [Joint Comprehensive Plan of Action].”

“I can say that the next Congress will continue our oversight, will continue to hold Iran accountable for its illicit activities,” she said. “We’re not going to be willing to look the other way because of a small infraction, thinking, oh well, if we take them to task on that they could walk away from the deal. We’re not scared of that.”

“Now we have to be very careful when we talk about tearing up the Iranian deal,” said Engel, one of just 25 House Democrats who voted against the deal. “Because we have already provided Iran with billions and billions of dollars [and] the things we’re asking Iran to do, they would just walk away from.”

Ros-Lehtinen specifically outlined efforts to put companies that do business with Iran on notice and vowed to push sanctions on the Islamic Revolutionary Guard Corps (IRGC) as well as “IRGC-controlled businesses … to include subsidiaries that are not wholly or majority-owned [by the IRGC] and those that have IRGC members on their boards.” Part of the goal is to put US and foreign companies on notice that doing business with Iran could prove harmful to their bottom line.

IRGC sanctions are also a top priority for the Foundation for Defense of Democracies (FDD), which argues that President Barack Obama’s Treasury Department has only designated 25 firms for terrorism-related offenses out of some 2,500 companies linked to the IRGC. After that, FDD Executive Director Mark Dubowitz said at the briefing that Congress and the incoming administration should adopt legislation introduced by Sen. Kelly Ayotte, R-N.H., that would extend sanctions to sectors of the Iranian economy that support the missile program and would reverse Obama Treasury Department regulations to prohibit all Iranian access to the US dollar.

“I think it’s wise for this administration not to abrogate the deal on day one,” he said, “but to actually use our ability under the deal [through] non-nuclear sanctions … to begin to address Iran’s malign activities.”

Dubowitz went on to argue that Trump’s election would cause “fear, uncertainty and doubt” for both the Iranians and the five world powers that negotiated the nuclear deal with the United States. Former Sen. Joseph Lieberman, UANI’s chairman, recommended taking advantage of that uncertainty and to sit down with Israel and America’s Arab allies early on to coordinate a regional response to Iranian trouble-making.

“That threat, that fear ought to be in the minds of the leadership of Iran and our allies in the P5+1,” he said. “When it comes to our relations with Iran and the goal of stopping Iran from ever becoming a nuclear power, the coming of the Trump administration represents a sea change, and from my point of view, a sea change in the right direction.”

Lieberman said Trump has “a lot of tools in his toolkit” when it comes to strengthening the terms of the nuclear deal and pushing back on its ballistic missile program and support for US-designated terrorist groups such as Hezbollah. He urged the new administration to start by focusing on “enforcement of the existing act, and to point out that Iran has already broken some of its terms.”

Under those terms, the United States has kept its nuclear sanctions on the books but waives them every few months if Iran continues to comply with its end of the deal. Dubowitz encouraged the incoming Trump administration not to have any qualms about reinstating those nuclear sanctions if warranted.

“The first step out of the gate is a menu of US nuclear sanctions in response to incremental Iranian cheating and a zero-tolerance policy on those incremental violations,” he said. “That would be a dramatic reversal from what we’ve seen.”

Dubowitz also floated the idea of having Trump treat the nuclear deal as a treaty rather than an executive agreement, as Obama did. That would empower the Senate to demand changes, including access to Iran’s military installations where past nuclear work was conducted and a permanent ban on certain nuclear activities instead of the current 15-year prohibition.

“We need to put the military option back on the table in a credible way,” he said.