While the US president vows that he’s done waiving sanctions, the amount of damage he intends to do — from letting Tehran’s trade partners off the hook to reinstating UN sanctions — remains an open question. 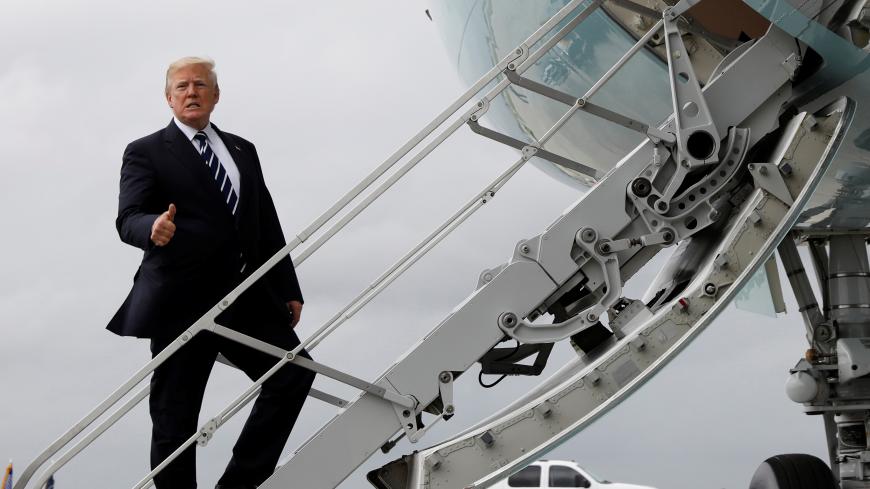 US President Donald Trump gives a thumbs-up as he boards Air Force One upon departure from West Palm Beach, Florida, April 22, 2018. - REUTERS/Kevin Lamarque

President Donald Trump has made it clear that he’s ready to be done with the much-maligned Iran nuclear deal. What that means, exactly, remains a topic of intense speculation with profound ramifications for the fate of the Joint Comprehensive Plan of Action (JCPOA).

Barring an improbable last-minute deal with other JCPOA parties to extend certain nuclear restrictions and punish Iran for its ballistic missile tests, Trump is likely to reinstate a first batch of congressional sanctions lifted under the deal when his waiver authority expires on May 12. The administration would then be required to punish countries that import Iranian oil, while retaining wide latitude on how aggressively it goes after sanctions violators, particularly US allies who remain committed to making the deal work.

The president’s plans beyond the May 12 deadline are even more enigmatic.

The deal has no formal exit mechanism, so Trump could conceivably reinstate some relatively benign sanctions and call it a day while Iran and the other parties to the deal continue to implement it even as the United States remains on the sidelines. On the other end of the spectrum, Trump could reimpose a whole slew of US sanctions in one fell swoop or even make use of a little-noticed provision of the JCPOA that would trigger a diplomatic standoff at the United Nations and force a resumption of international sanctions, condemning the deal to die.

“It’s sort of a question mark what the president truly intends to do,” said Richard Goldberg, a senior adviser at the hawkish Foundation for Defense of Democracies who previously worked on sanctions legislation on Capitol Hill. He told Al-Monitor, “The terminology ‘withdrawing from the deal’ … would imply that the president is going to reimpose all sanctions that were waived under the JCPOA. That would go beyond just this one waiver on May 12.”

Reinstating sanctions on May 12 would inhibit Tehran’s ability to export oil by threatening so-called secondary sanctions on countries that engage in transactions with Iran’s Central Bank. If a country imports Iranian oil, any banks facilitating the transaction risk being cut off from the US financial system.

But the law also allows the US president to exempt a country from financial isolation if he certifies that a bank has “significantly reduced” Iranian oil purchases. An April report from the Congressional Research Service notes that “the lack of precise definition of ‘significant reduction’ in oil purchases [has given] the administration flexibility in applying the exemption provision.”

Jarrett Blanc, who coordinated oversight of the JCPOA for Barack Obama’s State Department, told Al-Monitor that sanctioning European banks would be “an unprecedented hostile act” in trans-Atlantic relations. Yet European diplomats appear to be bracing for exactly that. Reuters reported in February that the European Union is considering measures to shield its firms from US secondary sanctions.

In 1996, for example, the EU responded to US secondary sanctions on foreign companies doing business with Iran, Libya and Cuba by imposing a “blocking regulation” that penalized European firms for withdrawing their business with US-sanctioned countries.

Tyler Cullis, a sanctions lawyer with the Washington firm Ferrari & Associates, told Al-Monitor, “What the EU regulation provided is that if the US had assets in Europe, those assets would be seized” in order to compensate a European firm’s losses as a result of US sanctions.

“They could just amend that blocking regulation to include all of those sanctions listed as part of the JCPOA,” said Cullis.

The prospect of being frozen out of the US financial system, however, could well override such guarantees and force European firms to curtail business with Iran. For risk-adverse firms, simply reactivating a US sanctions law — even if the Trump administration adopts a light touch — could still scare them out of the Iranian market.

After the looming May 12 deadline, Trump faces three more waiver deadlines in July. If he does not renew them, he would have to reimpose a host of other sanctions, including those targeting Iran’s hard currency reserves in foreign banks as well as its energy, shipping and shipbuilding sectors.

As part of the nuclear negotiations, the Obama administration also removed sanctions on some 300 Iranian individuals and entities that had been targeted under various executive orders. Trump would need to reinstate those as well in order to bring the pre-deal US sanctions regime back into full force.

“Reissuing the sanctions is actually a much more complicated affair than just [terminating] the waivers,” Cullis noted. “If [Trump] doesn’t waive sanctions but doesn’t take any further steps, what you have is really a shell of what existed prior to the nuclear deal.”

Reinstating those sanctions could consume a considerable amount of the Treasury Department’s resources, however, and there’s no guarantee it could be done in a timely manner.

“Considering that the 300-plus Iranian parties were designated under various US sanctions authorities over a 10-year time period, their immediate reinclusion onto the US sanctions lists will be a significant haul for the agency,” said Cullis.

The other parties to the nuclear deal — France, Britain, Germany, Russia and China — have shown interest in staying on board with or without the United States. But a little-noticed mechanism in the JCPOA appears to spell out a clear path for the Trump administration to unilaterally tank the deal, if it’s willing to face the diplomatic blowback.

Under the accord’s dispute resolution mechanism, any party to the deal may treat an “unresolved issue” as grounds to “cease performing its commitments under the JCPOA” while the issue moves to the UN Security Council for review. The council then has a month to resolve the issue. If it can’t, all the multilateral sanctions lifted under the JCPOA resume, in effect killing the deal.

“It would be perceived as such an aggressive step by the Europeans that in a universe where presumably the administration is trying to balance … competing priorities, they would at least think twice about doing that,” Blanc said.

After Iran exceeded its heavy water stockpile limit in February 2016 by less than 1 metric ton, some of the deal’s detractors argued that was a concrete example of a violation. Others point to Iran’s ballistic missile program, transfer of missiles to Yemen’s Houthi rebels and declarations that the JCPOA does not give international inspectors access to certain military sites.

“They don’t need a credible pretext,” Blanc noted. “They just let the clock run out and then go through the Security Council and go through all the relevant steps. Nobody can stop it.”

For all the hand-wringing over the fate of the hard-fought deal, it’s just as possible that Trump is banking on the looming threat of US withdrawal to secure concessions on a range of achievable “fixes” to the deal. These include prolonging certain nuclear restrictions beyond their “sunset” date, enhancing international inspections at Iranian military sites and cracking down on Tehran’s ballistic missile program.

During his confirmation hearing earlier this month, Trump’s nominee to head the State Department, Mike Pompeo, left the door open to US participation in a more stringent deal even after Trump reinstates sanctions in May.

“If there’s no chance that we can fix it, I will recommend to the president that we will do our level best to work with our allies to achieve a better outcome and a better deal, even after May 12,” Pompeo told the Senate Foreign Relations Committee during his confirmation hearing earlier this month.

After meeting with Pompeo, Sen. Ben Cardin, D-Md., insisted to reporters that Trump’s nominee appeared to have a “strong preference” for fixing the deal.

“He thinks the only way you can fix it is by being in the position to nix it,” said Cardin. “And if it gets nixed, it gets nixed.”