Can the United States use the UN to force other countries to sanction Iran? 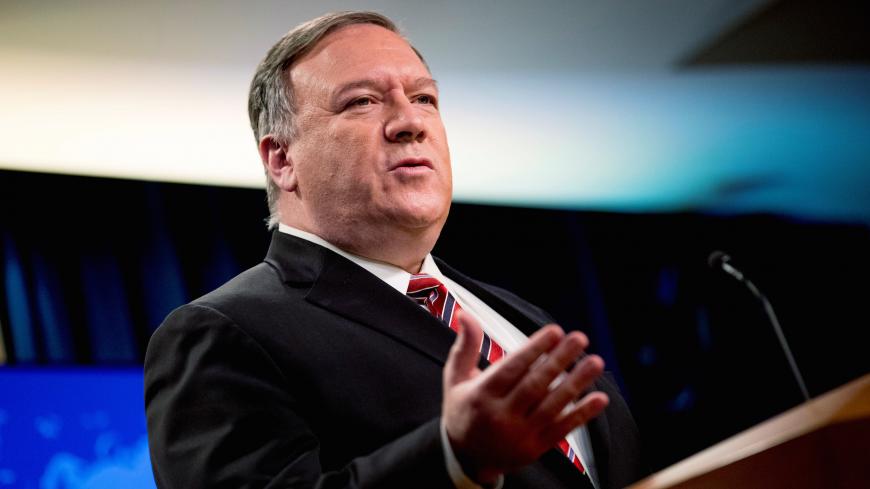 US Secretary of State Mike Pompeo speaks at a news conference at the State Department in Washington, April 29, 2020. - Andrew Harnik/Pool via REUTERS

Secretary of State Mike Pompeo is publicly arguing that the United States is still a participant in the Iran nuclear deal despite President Donald Trump’s stated withdrawal from the accord in 2018.

Trump and his aides have repeatedly characterized the reimposition of bruising US sanctions on Iran as a “withdrawal” from the accord. But by asserting that the United States is still a party to the accord, the Trump administration hopes to use the UN Security Council resolution that formalized the 2015 deal to snap back multilateral sanctions against Iran.

“UN Security Council Resolution 2231 is unambiguous where the United States is a participant,” Pompeo said at a press conference Wednesday. “It’s just there in the language. There’s nothing magic about this.”

Pompeo added that “the rights that accrue to participants in the UN Security Council resolution are fully available to all those participants,” indicating that the United States may seek to use the resolution to force other countries to reinstate sanctions against Iran.

Trump did just that when he reinstated unilateral US sanctions in 2018 after signing an executive order titled "Ceasing US participation in the JCPOA” — the formal acronym for the deal. Since the US withdrawal, Iran has tripled its stockpile of low-enriched uranium past the limits laid out in the accord.

The State Department first sent Congress a legal opinion in December arguing that it may still have the legal authority needed to force the UN to reinstate snapback sanctions, adding to Trump’s already formidable Iran sanctions regime.

“There’s no supreme court of the United Nations you can go to and get an answer to this question,” said Jarrett Blanc, who oversaw the deal’s implementation under President Barack Obama. “Snapback was an innovation. It was a novel procedure created to solve a particular problem in the JCPOA negotiations. I don’t actually know what would happen if the United States tried to use it.”

He added that such a move would be a US “power play.”

“Generally speaking, when the US does a power play at the United Nations, it gets what it wants,” said Blanc. “But I wouldn’t count on that in this case, given the specific details of this case and how badly isolated the US has made itself over the last three years.”

As of right now, the Trump administration maintains that it would only resort to snapback sanctions as an option if other countries on the Security Council refuse to extend the conventional arms embargo on Iran, which is set to expire in October. The arms embargo, which bars Iran from buying combat aircraft, tanks and artillery, is the deal’s first sunset provision.

“We’ll work with the UN Security Council to extend that prohibition on those arms sales,” Pompeo told reporters. “And then in the event we can’t get anyone else to act, the United States is evaluating every possibility about how we might do that.”

It’s unlikely that the Trump administration will persuade China and Russia, both of which wield security council vetoes, to extend the arms embargo. Iran has said that both countries have expressed interest in selling it fighter jets once the arms embargo expires.

“It’s pretty clear that the administration is using it as a pretext to dissolve the JCPOA and snap back previous UN Sanctions,” said Mary Kaszynski, the deputy director of policy at the Ploughshares Fund, which supports the deal. “It would be ideal to extend the arms embargo. It’s also nearly impossible to do so because the Russians and Chinese are just not going to get on board with that.”

The American Israel Public Affairs Committee (AIPAC), which opposes the deal, has also lent a hand, mustering significant Democratic support for the Trump administration’s bid to extend the arms embargo. AIPAC and the numerous Democrats who support extending the embargo have not weighed in on the Trump administration’s plan to threaten snapback sanctions as leverage.

The Trump administration initially showed no interest in using the snapback mechanism when it first withdrew from the deal.

“If Joe Biden is elected president, in January he has got a whole variety of options to potentially revive the JCPOA,” said Blanc. “And that becomes more difficult if [UN Security Council Resolution 2231] is basically wiped clean. Because right now, if snapback sanctions come back into force and up the ante, you have to bring in the Russians and Chinese, who have vetoes on the Security Council.”