The Trump administration is coming under pressure from anti-Iran deal advocates to find a way to trigger the "snapback" of UN sanctions this year. 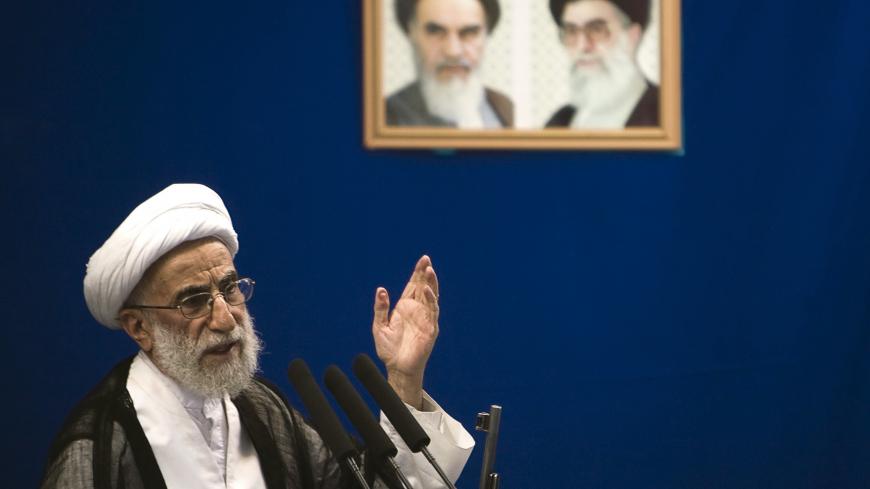 The head of Iran's Guardian Council, Ahmad Jannati, delivers a sermon during Tehran's Friday prayers, Aug. 21, 2009. It was announced today that Jannati, now 92, had been sanctioned by the United States for what US Treasury Secretary Steven Mnuchin called "manipulation of elections." - REUTERS/Morteza Nikoubazl

While announcing mostly symbolic sanctions today on members of Iran’s Guardian Council ahead of Friday's Iranian parliamentary elections, top US Iran envoy Brian Hook did not commit to whether Washington planned to trigger UN “snapback” sanctions on Iran later this year.

The sanctions announced today target five officials with the 12-member, hard-liner-dominated council responsible for vetting candidates in Iran’s parliamentary elections. The council has come under fire in recent months for disqualifying large numbers of Reformist candidates for Friday's vote; Hook said the council members “oversee a process that silences the voice of the Iranian people."

Hook, the US special envoy on Iran, also told journalists at the State Department, “Now that Iran has violated the nuclear deal, I think five times now, that caused the Europeans to invoke the dispute resolution mechanism, there isn’t much left of the deal to preserve. It’s going to start expiring in October, and the regime has violated it many times.”

The Trump administration is coming under pressure from anti-Iran deal advocates such as Foundation for Defense of Democracies and their allies in Congress such as Sen. Ted Cruz, R-Texas, to trigger the “snapback” of UN sanctions on Iran, ostensibly to prevent the expiration of a UN arms embargo on Iran that expires in October. The arms embargo is part of a UN Security Council resolution (2231) that enshrines the 2015 Iran nuclear deal that Trump withdrew the United States from in 2018. But former US officials who worked on Iran say that the Iran arms deal expiration issue is partly a pretext by anti-deal activists to try to prevent a future US administration from having the discretion to be able to possibly return to the Joint Comprehensive Plan of Action (JCPOA).

“The arms embargo is a total red herring,” Jarret Blanc, the former head of the State Department Iran nuclear deal implementation, told Al-Monitor. “It doesn’t encompass any of the weapons systems that we are most concerned about. Air defense stuff is not covered by the arms embargo.”

Advocacy surrounding it is about “pure US domestic politics,” Blanc, now with the Carnegie Endowment for International Peace, said.

“The arms embargo sounds like a big deal, so they play it up,” Blanc said, referring to anti-JCPOA advocates. “They … want to make it impossible for any Democrat possibly elected in November to go back into the JCPOA.”

“I think some in the administration are very keen to make October the real ‘do-or-die’ date even though the arms embargo itself is certainly not the most important part of pressure against Iran,” Henry Rome, Iran analyst at the Eurasia Group, told Al-Monitor.

How much the October date reflects US administration consideration of the US presidential election calendar is a tough question, Rome continued.

“What I can say is, the goal here is that they want to use October as a forcing event, to force the Europeans to make a decision to not only ensure the arms embargo doesn’t expire, but to take [out] the entire deal,” Rome said.

But if the deal manages to limp along until October, remaining parties to the JCPOA — the UK, France, Germany, China and Russia — would presumably be very interested to see the outcome of the US elections in November before choosing then to implode the deal.

A European official who works on Iran said it was still too early to say how the Europeans might maneuver to try to manage Trump administration pressure to trigger UN snapback sanctions on Iran or address concerns about the October expiration of the arms embargo.

European diplomats have recently made the case that there is not so much additional economic pressure that would be imposed on Iran as a result of the triggering of UN sanctions, compared with that already resulting from international overcompliance with US secondary sanctions imposed after the US withdrawal from the JCPOA. In the meantime, the diplomats have noted Iranian threats that Iran could withdraw altogether from the nuclear Non-Proliferation Treaty if the Iran nuclear case was referred back to the UN and UN snapback sanctions were imposed.

“The problem with maximum pressure is, it is high risk,” a European diplomatic source said this month. “We really feel there is no answer to the problem, if maximum pressure pushes Iran out of the JCPOA entirely, and they resume expansion of their nuclear program, what is the plan?”

The expiration of the arms embargo is a genuine concern for Iran's rivals in the region, including Saudi Arabia, Israel and the United Arab Emirates, said Ali Vaez, director of Iran programs at the International Crisis Group.

For the Europeans, “It is a dilemma,” Vaez told Al-Monitor. “That is why what is being discussed at this time is to see if there is a way of extending the arms embargo without necessarily bringing about the collapse of the agreement altogether.”

“The problem is, there is almost no way the Russians or Chinese will vote for a resolution like that,” Vaez continued. “They are likely to veto it. The Russians see no justification for extending the arms embargo. … So it’s a very tricky situation. This could deepen existing fissures within the Security Council and paralyze the council in countering major conflicts and challenges.”

But the United States, having withdrawn from JCPOA, may not find it diplomatically if not legally feasible to trigger UN sanctions snapback on Iran on its own, Vaez said.

“I don’t think it can be accepted by anyone, in the Joint Commission [that oversees JCPOA implementation] of the UN Security Council,” Vaez said. “The reality is, regardless of what State Department lawyers would say, this process [of UN sanctions snapback] can only be started from within the Joint Commission of which the US is no longer a party.”

The three Western European parties to the JCPOA — the UK, France and Germany — formally triggered the deal’s dispute resolution mechanism in January.

“So far, at least until this fall, everyone wants to drag it out,” Vaez said. “I also think Iran is unlikely to further ramp up its nuclear program.”

It appears that we have “ended up, tacitly, with a ‘less for less’ arrangement,” Vaez said, referring to Iran reducing its commitments under the JCPOA for less sanctions relief. “Neither side is happy with it. But both are willing to live with it until November.”