Europeans with embassies on the ground disagree with the belief by Donald Trump administration officials that the Iranian regime is on the brink of collapse, and that the administration can wait for Iran to surrender to a long US wish list. 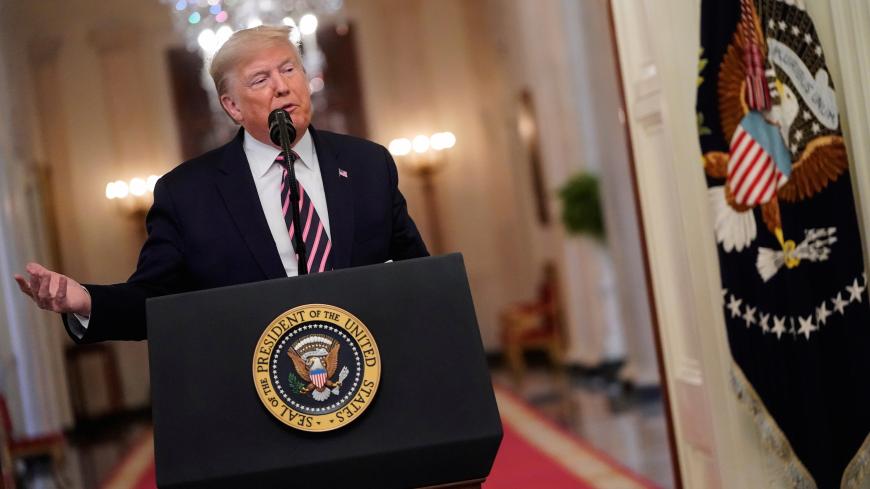 US President Donald Trump delivers a statement about his acquittal in the East Room of the White House in Washington, Feb. 6, 2020. - REUTERS/Joshua Roberts

European diplomats working to try to leverage the Donald Trump administration’s Iran “maximum pressure” campaign into a negotiation for a new deal are increasingly worried as they say US officials seem in recent months to have convinced themselves that the Iranian regime is nearing the brink of collapse and show little interest in getting back to the negotiating table, even as Tehran’s nuclear program expands.

The Iranian regime is certainly under pressure, European officials acknowledge, including from recent protests and the US reimposition of crippling sanctions on Iran's energy and banking sectors after Trump’s withdrawal from the 2015 Iran nuclear deal, the Joint Comprehensive Plan of Action (JCPOA). But the Europeans do not share the Trump administration’s apparent belief that the Iran regime “is done” and will eventually either just collapse or be forced to surrender to a long US wish list of demands for transformation into a “normal country,” as Secretary of State Mike Pompeo often puts it.

“We think the Iranians are able to absorb a lot of pain,” a European diplomatic source, speaking not for attribution, said.

“The problem with maximum pressure is, it is high risk,” the European source continued. “We really feel there is no answer to the problem, if maximum pressure pushes Iran out of the JCPOA entirely, and they resume expansion of their nuclear program, what is the plan?”

Trump, who has previously said he is not particularly interested in Iranian regime change, mentioned the Iranian protests in his relatively brief remarks on foreign policy in his State of the Union address Feb. 4. He seemed to dangle the prospect of Iran getting out from under sanctions, but indicated it was entirely up to Iran to make any overtures, and then said officials in Tehran may be too proud to do so.

“In recent months, we have seen proud Iranians raise their voices against their oppressive rulers,” Trump said. “The Iranian regime must abandon its pursuit of nuclear weapons; stop spreading terror, death, and destruction; and start working for the good of its own people.

“Because of our powerful sanctions, the Iranian economy is doing very, very poorly,” Trump continued. “We can help them make a very good and short-time recovery. It can all go very quickly, but perhaps they are too proud or too foolish to ask for that help. We are here. Let's see which road they choose. It is totally up to them.”

European diplomats said it was chiefly Trump in the US administration who showed much interest in efforts spearheaded by French President Emmanuel Macron last summer and fall to try to broker US-Iran negotiations that Trump wanted kicked off with some sort of photo op with an Iranian counterpart. Meantime, the Iranians insisted that some form of sanctions relief be assured ahead of a meeting.

While the French say they got the United States and Iranians to agree on a four-part framework for future talks, efforts to engineer a Trump meeting or phone call with Iranian President Hassan Rouhani at the UN General Assembly in New York in September didn’t materialize. Subsequent follow-up efforts to build on the agreed framework and advance de-escalation talks stumbled after protests broke out in Iran in November over a gas price hike, and the Trump administration became convinced that the Iranian regime would be under more pressure and to hold off on talks, said Ali Vaez, director of Iran programs at the International Crisis Group, which published a report last month that details the mediation efforts.

Because of the protests, the Trump administration “now believes that the Iranians are in an even weaker position, and all in all, the US is not ready to make any significant concessions to the Iranians,” Vaez said.

“We have seen this movie before,” Vaez said. “The weaker party does not take the first step in any diplomatic initiative. The onus is on the stronger party to make a concession.”

“The French constantly said that the president [Trump] was much more flexible and open than almost anyone around him” to the proposed diplomatic initiative, Vaez added.

Other European diplomats and analysts have shared the impression that Trump almost alone in his administration has shown any interest in getting to the table with Iran, with most everyone else focused only on maximum pressure.

“I think everybody is trying to understand the concrete impact that the general interest of the US president for a new deal has on the administration itself and its willingness to prepare for negotiation,” Charles Thepaut, a French foreign policy expert currently serving as a visiting scholar at the Washington Institute for Near East Policy, told Al-Monitor. “On the other side, the US administration itself is only focusing on maximum pressure. So, I think what everybody is trying to understand is whether this nuance or this difference of position between the president and his own administration is opening some space to work on a new negotiation with Iran, or not. And this is an open question, because the situation is very volatile.”

Since the US killing of Iranian Quds Force chief Qasem Soleimani on Jan. 3, “The US administration doesn’t give signs of willingness to prepare for a negotiation,” Thepaut continued. “But the situation can change a lot depending on a number of factors. … No matter what people think about maximum pressure, the reality is that it led Iran to limit a number of its commitments, and to get closer to acquiring nuclear capabilities than before. And the clock is ticking.”

“And that is why the Europeans have triggered the dispute resolution mechanism, and are maintaining the door open between Iran and the United States, for negotiation,” Thepaut said. “Because the kind of counter-proliferation problem created by the weakening of the JCPOA constraints on the Iranian side means that some of the assumptions of the JCPOA — the limitations of uranium enrichment capabilities — are in danger.”

European Union foreign policy chief Joseph Borrell, who made his first trip to Iran in his new job earlier this week, is due to meet with Pompeo at the State Department on Friday.

The Iranians were calm, cordial and polite in their meetings with Borrell and his delegation, an EU official, speaking not for attribution, told Al-Monitor. They did not rule out negotiations altogether, he said, but raised conditions for them to occur. These included that there would be no bilateral negotiation with the United States, and any negotiation would have to happen within the format of the P5+1 (the permanent five members of the UN Security Council plus Germany), which negotiated the JCPOA with Iran. The Iranians also said sanctions would have to removed before negotiations on a new deal.

Iran is due to hold parliamentary elections later this month where conservatives and hard-liners are expected to become more dominant. “As the result of Trump’s Iran policies, … no one in Tehran has the courage to speak about the advantages of negotiation, let alone suggest a new round of talks with the United States,” Al-Monitor’s Rohollah Faghihi reported from Iran on Jan. 27.