The Trump administration conducted an internal assessment of its Iran “maximum pressure” policy this month and determined that it so far has been ineffective, according to a new report. 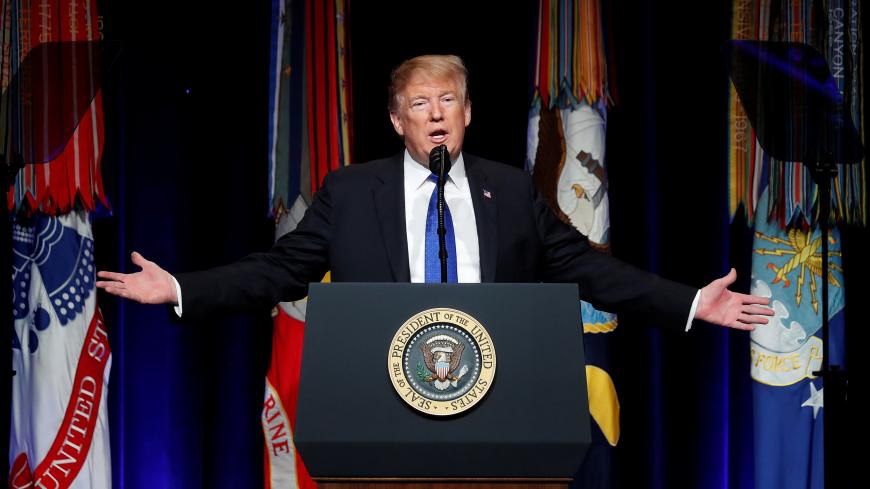 US President Donald Trump speaks during the Missile Defense Review announcement at the Pentagon in Arlington, Virginia, Jan. 17, 2019. - REUTERS/Kevin Lamarque

WASHINGTON — The Donald Trump administration conducted a preliminary internal assessment of its Iran “maximum pressure” policy this month and determined that it is not working, according to a new report. Such an assessment could drive administration efforts to try to provoke Iran to leave the nuclear deal, possibly by urging a potential inspections crisis at the International Atomic Energy Agency (IAEA), some experts said.

“So far, there is little evidence that the administration is meeting any of its possible goals,” the International Crisis Group writes in the new report, “On Thin Ice,” on the third anniversary of the Iran nuclear deal.

“A preliminary internal assessment by the administration described to Crisis Group purportedly concludes that the U.S. approach has yet to curb Iran’s behaviour or entice Tehran back to the negotiating table,” the ICG report says, citing in a footnote an interview conducted by the group with a senior US administration official this month.

A National Security Council spokesman, asked about the reported US assessment, declined to comment on internal deliberations. The State Department neither confirmed or denied the purported assessment. A department official, speaking not for attribution, told Al-Monitor, “The Trump administration’s withdrawal from the disastrous Iran deal, the reimposition of tough sanctions and the ongoing maximum pressure campaign have successfully deprived the Iranian regime of millions of barrels and billions of dollars in oil revenue to fuel its terrorist activities.” The official added, “The courageous and growing protests by the Iranian people objecting to the regime’s human rights abuses, corruption and economic mismanagement speak for themselves.”

The reported Trump administration assessment that Iran may be able to wait out its maximum pressure campaign may convince administration officials that they need more European buy-in to the policy to succeed, said Ali Vaez, director of the ICG Iran Project and co-author of the report. But Europe is currently trying to entice Iran to stick with the nuclear deal after the US exit last year and reimposition of harsh sanctions on Iran's oil and banking sectors.

“If you look at the range of ultimate objectives different people [in the administration] have in mind, from protests that pose an existential threat to the system, to change of behavior, to the Iranians coming back to the negotiating table, none of that is happening,” Vaez told Al-Monitor in an interview.

“The Iranian economy is in dire straits but not a downward spiral,” Vaez said. “While the number of protests was higher in 2018 compared to previous years, their scale and scope remain limited.”

In short, the policy is not working, he said. An additional source of time pressure felt by the Trump administration is that under the UN Security Council resolution that enshrines the 2015 nuclear deal, formally known as the Joint Comprehensive Plan of Action (JCPOA), a conventional arms embargo is supposed to be lifted on Iran in 2020.

“Now, the other point, which I think is key, is precisely because of this assessment,” Vaez said, adding that “the administration seems to me to have come to the conclusion that it needs to basically bring others on board for this campaign of pressure to become effective. And also to stop the UN from lifting the arms embargo in 2020.”

“If that happens, Iran will be able to bolster its defensive capabilities through purchasing Russian and Chinese conventional weapons. And at that stage, it would be much harder to go after their nuclear program,” Vaez said. “So that adds pressure on time. But there is no way to stop the UN Security Council from lifting the embargo unless the JCPOA is dead.”

With Trump announcing the withdrawal of US forces from Syria, the Trump administration may seek to try to placate regional allies such as Israel by ramping up pressure on Iran at the IAEA, which has consistently reported Iran’s compliance with the nuclear deal in 13 reports since implementation day three years ago.

One sign the administration may try to pursue that track was a tweet this week by hawkish national security adviser John Bolton, and comments he made in Israel last week.

During a visit to Israel on Jan. 6 to discuss the US withdrawal from Syria, Bolton said, “We have little doubt that Iran’s leadership is still strategically committed to achieving deliverable nuclear weapons.”

“I have no idea where Bolton is getting the intelligence to support this claim,” Joe Circincione, head of the Ploughshares Fund, which supported the Iran nuclear deal, wrote at Defense One. “Even the much-ballyhooed documents stolen from the so-called Atomic Warehouse by Israeli agents only show that Iran had the framework for a nuclear weapons program in place by 2003, but not that they ever did much beyond vague plans. The [US] intelligence community stands by its assessment that Iran abandoned the program in 2003.”

Some members of the Trump administration may be trying to provoke some kind of crisis between the IAEA and Iran in order to get Iran to leave the deal, said former US Iran nuclear negotiator Richard Nephew.

“Everyone [in the Trump administration] is upset that the Iranians keep being able to cite that the IAEA has said once again they are in full compliance,” Nephew, now with Columbia University, told Al-Monitor.

“The worst case scenario for them, honestly, is if the pressure campaign … does some damage but doesn’t overthrow the regime, and the Iranians don’t withdraw from the JCPOA, and so they are then left with Iranian compliance, insubstantial sanctions pressure, and then they have got to answer the question: Now what?”

Some members of the Trump administration such as Bolton very much want the Iranians to withdraw, Nephew added. “Part of this crew truly wants the crisis.”

“So probably the objective here, … especially with what Bolton is allegedly doing to prompt an inspection crisis, is to try to put the burden of blame around Iran’s neck,” Vaez said. “Basically, if you can't convince others that the JCPOA is dead, try to persuade them that the deal is already defunct as Iran is violating it by denying access to ‘suspect’ sites.”

Any effort by the Trump administration to try to politicize the IAEA inspections process would be deeply troubling, said Kelsey Davenport of the Arms Control Association.

“The IAEA clearly states that inspectors have had access to all the sites in Iran they have requested to visit,” Davenport told Al-Monitor. “The IAEA has a process for evaluating information from member states and the agency should examine information provided by Israel, and if it wants inspectors visiting a site, it is important the IAEA take that step.”

“Maintaining the IAEA’s independence is critical for the integrity of the agency,” she said. “The US and Israel must respect the IAEA’s processes for evaluating information and deciding whether or not to act on it. Politicizing the inspections process only damages the IAEA’s credibility.”