On Iran, US allies fear ‘maximum pressure’ could provoke escalation

While Iran continues to comply for now with the 2015 nuclear deal even after the reimposition of US sanctions, European allies fear that the US administration’s “maximum pressure” campaign could eventually lead to war. 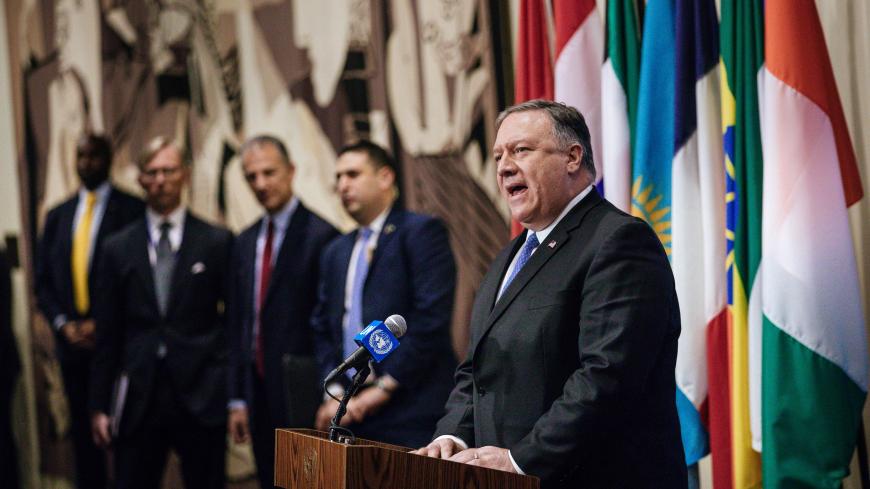 WASHINGTON — While Secretary of State Mike Pompeo called on the UN Security Council today to impose tougher measures to restrain Iran’s ballistic missile activities, European allies said they doubt the Donald Trump administration’s maximum pressure campaign will achieve its stated objective of a better agreement with Iran. Instead, they fear it is more likely over time to provoke Iran to lash out in ways that could lead to military escalation.

“Today, Iran has the largest ballistic missile force in the Middle East,” Pompeo said at a UN Security Council session Dec. 12 on Resolution 2231 that enshrines the 2015 Iran nuclear deal, also known as the Joint Comprehensive Plan of Action (JCPOA). “It has hundreds of missiles which pose a threat to our partners in the region,” Pompeo added.

“So the question … now: What steps ought we take to confront this Iranian malign activity?” he asked. Pompeo said the United States would work with member states to seek to reimpose the restrictions on Iran’s ballistic missile activity contained in an older, 2010 resolution, which was superseded by the one that enshrined the 2015 Iran nuclear deal.

“Beyond addressing Iran’s ballistic missile activities, the council should not lift the arms embargo in 2020 on Iran,” Pompeo also proposed.

While several other UN envoys said they share Washington’s concerns about Iran’s ballistic missile launches and alleged transfer of missile technology to Yemen’s Houthi rebels, they unanimously stressed that they considered preservation of the Iran nuclear deal a greater international security priority. Trump’s withdrawal from the deal in May and reimposition of harsh sanctions on Iran’s oil and banking sectors last month threaten to deprive Iran of the economic benefits it was promised in exchange for the constraints on its nuclear program that it made and has complied with, according to 13 reports by the International Atomic Energy Agency, they noted. But for how long?

“We call on Iran not to conduct any further ballistic missile launches … and to refrain from unacceptable rhetoric accompanying these activities,” German Ambassador to the UN Christoph Heusgen told the body.

But, he added, “We believe the American position is throwing out the baby with the bath.”

“The JCPOA has significantly rolled back Iran’s nuclear program and ensures it does not develop a nuclear weapon,” eight European nations said in a joint statement before the session today. “However, the JCPOA faces considerable challenges following the withdrawal by the United States and the reimposition of US sanctions against Iran,” said the European nations.

“It is essential that the JCPOA continues to work for all its participants, including by delivering economic benefits to the people of Iran,” they said.

European diplomats who have closely engaged with the US administration on Iran say they see little prospect that Iran will take up Trump’s offer of talks anytime soon. They also mock the prospect that Iran would accept anything resembling Pompeo’s 12-point plan for Iran to become a “normal country,” as Pompeo frequently puts it. Some allied diplomats have wondered if some members of the Trump administration instead would prefer to provoke Iran to take rash action that would provide a pretext for military confrontation, even as Trump has told European counterparts he does not want a war with Iran.

“On so-called ‘maximum pressure’ on Iran … at some stage you need to act carefully with Iran,” a European diplomat, speaking not for attribution, said in a meeting with a small group of journalists. “If you put too much pressure on Iran, at some stage it will resume its nuclear program. It increases the risk of them misbehaving," he added.

“Keeping some flexibility in this policy is essential,” he said, adding, “Some pressure is necessary. Excessive pressure will be a mistake.”

“The big question mark, beyond maximum pressure — what is the strategy? What does the US expect?” he added.

The diplomat continued, “President Trump has said he wants Iran to go back to the negotiating table. But when we ask the Iranians, ‘When [will] you go?’ they refuse. Why would they go? They made a compromise. Then they are invited to make a compromise along Pompeo’s 12-point plan. At some stage, they may get back to talks with the US. In the short term, that is pretty unlikely."

“The effect of maximum pressure policy can have two results: Either at some stage, it works according to plan, meaning Iran get down on its knees, signs Pompeo’s new agreement — no nukes, no weapons,” the diplomat, belittling the prospect, said. “That’s option one,” he added.

He continued, “Option two, supported by some people within this administration, is an escalation plan. To impose so much pressure, it is pushing Iran to default. That is a serious risk."

“If at some stage, Iran cannot export any oil, the risk of Iran misbehaving … will increase,” he said, adding, “If Iran decides to get back to its nuclear program, then there could be military action. … That could be one of the effects of maximum pressure, and I am not sure it is off the table.”

“So a lot depends on what we are able to do to mitigate this,” he said.

Pompeo, speaking to journalists at a stakeout after the UN session, vowed that the United States would rally an international coalition to pressure Iran over its missile activities.

“Now it’s time for this Security Council to get serious about this real risk from proliferation from the Iranian regime,” Pompeo said. “We’re going to exert American leadership to build a coalition … to build out a set of responses that deliver deterrence against Iran and its continued proliferation of ballistic missiles,” he added.

But the European diplomat had a harsh assessment of how many countries the Trump administration has persuaded to its approach of trying to kill a nuclear deal Iran was complying with while simultaneously blaming Iran for every single problem in the Middle East.

“As of right now, the attempt by this administration to build a coalition against Iran has failed,” he said.