Secretary of State Mike Pompeo said the United States would rally the world to impose crippling economic pressure on Iran to persuade it to submit to a broad set of demands, or face regime change. 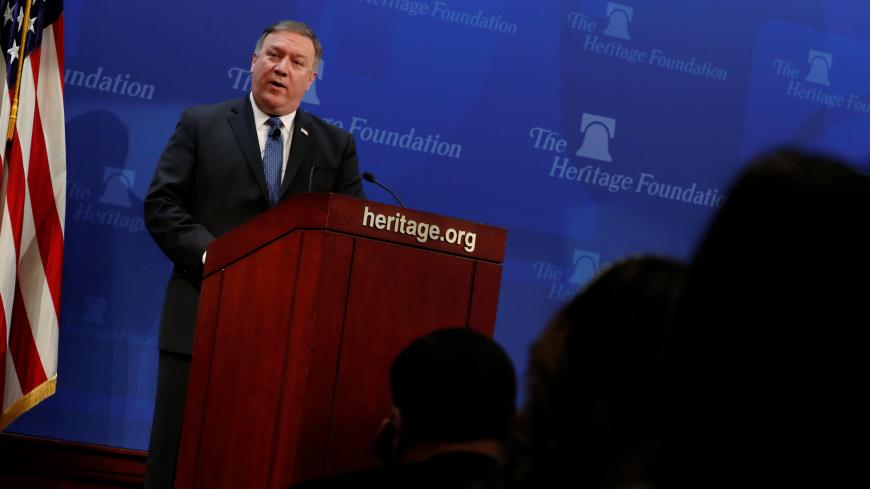 US Secretary of State Mike Pompeo delivers remarks on the Trump administration's Iran policy at the Heritage Foundation in Washington, May 21, 2018. - REUTERS/Jonathan Ernst

WASHINGTON — Secretary of State Mike Pompeo, in remarks laying out the Donald Trump administration’s “Plan B” after its exit from the Iran nuclear deal, said today the United States would rally the world to impose crippling economic pressure on Iran to force it to end all enrichment forever, halt its support for military proxy groups, curb its missile program and withdraw its military advisers from Syria, among other demands.

But America’s new top diplomat did not explain how the United States would persuade deeply skeptical and wary international allies and partners to endorse the kind of “maximum pressure” campaign that would threaten the Iranian regime’s survival and possibly foment regime change.

“Iran will be forced to make a choice: either fight to keep its economy off life support at home or keep squandering precious wealth on fights abroad,” Pompeo said in remarks to the conservative Heritage Foundation, in his first major foreign policy address since he became secretary of state last month. “It will not have the resources to do both.”

Pompeo said the United States would not help European allies, Russia and China in their current frantic efforts to keep Iran in the 2015 nuclear deal after Trump withdrew from it on May 8. And he signaled, as national security adviser John Bolton has previously, that the Trump administration would not be inclined to offer waivers or exemptions on US secondary sanctions that are being phased in over the next few months.

“We will hold those doing prohibited business in Iran to account,” Pompeo said.

“I know that they may decide to try and keep their old nuclear deal going with Tehran,” Pompeo said of European allies. “That is certainly their decision to make. They know where we stand.”

The remaining parties to the Joint Comprehensive Plan of Action (JCPOA) — Britain, France, Germany, Russia and China as well as Iran and the European Union — are set to hold their first meeting without the United States of the Joint Commission overseeing JCPOA implementation on May 25 in Vienna. Political directors from the United States and the E3 — the three European countries that helped negotiate the JCPOA (Britain, France and Germany) — were tentatively scheduled to meet on May 24, a diplomatic source told Al-Monitor late last week, though it was not clear if those plans had changed after Pompeo’s speech on May 21.

While setting out a list of a dozen demands for the Iranian regime, Pompeo suggested that the alternative scenario resulting from US-led economic pressure might be regime change — that the Iranian people would rise up and overthrow their rulers. That prospect is one that is likely to be assessed as unrealistic, and alarming, to many of the European, Russian and Asian partners that the Trump administration is trying to persuade to get on board with its maximum pressure campaign.

“At this milestone, we have to ask: What has the Iranian Revolution given to the Iranian people?” Pompeo said. “Iran’s economy is stagnant and without direction and about to get worse. Its young people are withering under the weight of frustrated ambitions.”

European leaders, who had been waiting for the Trump administration to announce its vision for a post-JCPOA Iran strategy, did not seem to find much to work with from Pompeo’s strident speech. Most simply, they expressed deep skepticism that it would work.

“I think the idea of a jumbo Iran treaty [is] very difficult,” British Foreign Secretary Boris Johnson said in a press availability in Argentina March 21.

“I think if you try to now to fold all those issues — ballistic missiles, Iran’s behavior, Iran’s disruptive activity in the region, nuclear activity — into a … new jumbo Iran negotiation, a new treaty … I don’t see that being very easy to achieve in anything like a reasonable timescale,” Johnson said.

EU foreign policy chief Federica Mogherini said she had listened attentively to Pompeo's speech, but was not convinced by it.

"Secretary Pompeo’s speech has not demonstrated how walking away from the JCPOA has made or will make the region safer from the threat of nuclear proliferation or how it puts us in a better position to influence Iran’s conduct," Mogherini said in a statement. "There is no alternative to the JCPOA."

“The speech showed that the Trump administration is united in its pursuit of regime change in Tehran,” Vaez, a senior Iran analyst at the International Crisis Group, told Al-Monitor. “This is not news to the Iranians, but could potentially help further unite the Europeans in their efforts to salvage the deal and stave off another war in the region.”

“To believe that a redux of the failed policies of the past four decades would produce a better deal or a more moderate Iran is to believe in unicorns,” Vaez said. “The Trump administration has now made it clear that Europe wasted its time in trying to convince it to stay in the deal. Its message to Europe is now clear: Join me in changing not Iran's behavior, but its regime. I doubt there is any appetite for that in Europe.”

Pompeo’s maximalist demands are also likely to close off any prospect for future dialogue with Iran, Vaez said.

“With the US unilaterally and recklessly violating the nuclear deal and pursuing maximalist demands, its ability to restore its sanctions leverage will be limited,” Vaez added. “Even if it could inflict maximum pressure on Tehran, such onerous measures are unlikely to persuade a leadership seemingly convinced that the only thing more dangerous than this threat would be to surrender to it.”

Pompeo’s speech “is a huge slap in the face to the Europeans,” Suzanne Maloney, a State Department Iran policy planning expert during the George W. Bush administration, told Al-Monitor. “It was needlessly provocative.”

“The [Trump] administration does believe that they can in fact compel the Europeans to go along with US sanctions, and there is no real deal to be negotiated,” Maloney, now with the Brookings Institution, said. “What Pompeo outlined is not a viable or realistic diplomatic strategy. It draws zero support from any of our allies or partners, with the exception of Israel, Saudi Arabia and the United Arab Emirates.”

Pompeo’s speech, which did not mention Russia or China, suggests the Trump administration does not understand how important Russian and Chinese buy-in and pressure were to achieving progress in the Iran nuclear negotiations in 2013, Maloney said.

The speech was “completely incognizant of the degree to which Russian and Chinese coordination are vital to any serious diplomacy,” she said.

“If I were sitting in Berlin or Paris or London or Brussels, I don’t see anything that suggests the US wants to be part of some diplomatic process that works with the countries that generate leverage on Iran,” Jeff Rathke, a former State Department diplomat now with the Center for Strategic and International Studies, told Al-Monitor.