The US "maximum pressure" campaign lets the Donald Trump administration look like it is being tough on Iran while reducing US involvement in Syria and other parts of the Middle East. 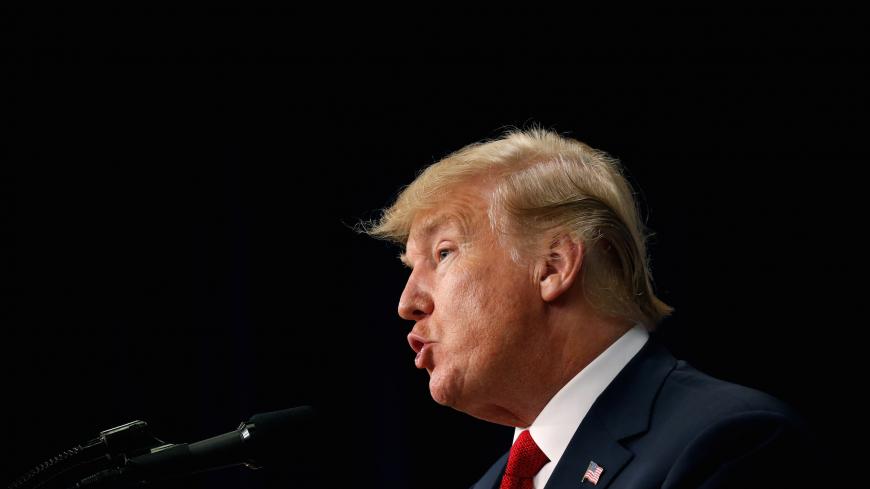 US President Donald Trump speaks during an "Angel Families" immigration event at the White House in Washington, US, June 22, 2018. - REUTERS/Leah Millis

WASHINGTON — The United States is not pursuing regime change in Iran, a top State Department official insisted today, even while he highlighted recent Iranian protests, the Iranian currency’s plunge in value against the dollar and the Donald Trump administration’s urging of countries around the world to drop their imports of Iranian oil to zero by November.

“The Iranian people are rightly frustrated with the regime, and they are expressing their frustration in nationwide protests and in smaller acts of defiance throughout the country,” Hook said.

The White House, asked about US policy on Iran, highlighted Iranian protesters’ economic grievances with the Iranian regime.

“The protesters are expressing their discontent with the corruption of their government, the lack of economic opportunity, and a desire for greater freedoms,” a National Security Council spokesperson, speaking not for attribution, told Al-Monitor today. “Instead of fulfilling its promises to bring prosperity to Iranian citizens, the Iranian government has exported conflict and unrest in the region.”

“The United States is sympathetic to the plight of the Iranian people, who have been the longest suffering victims of their government,” the NSC official continued. “We condemn any use of violence by the Iranian regime to suppress peaceful citizens protesting and expressing their views.”

“The president has made clear that our differences are with the Iranian government’s actions and, in particular, with the actions of the Islamic Revolutionary Guard Corps,” the NSC official said. “The Iranian government needs to change its destabilizing behaviors. This includes their support for terrorist groups such as Hezbollah and Hamas; their assistance to proxy militias in Syria, Iraq and Yemen; and their continued development and proliferation of ballistic missiles. As President Trump has clearly stated, he wants to see a free and prosperous future for the people of Iran; we believe that future should be of their choosing.”

If the Trump administration is not publicly acknowledging that its "maximum pressure" campaign is intended to lead to the collapse of the Iranian regime, it may be because it is having a hard time persuading wary allies of what its intentions are in the wake of Trump’s withdrawal from the Iran nuclear deal in May. Hook is scheduled to meet with political director counterparts from Britain, France and Germany later this week, he said.

Teams of officials from the State and Treasury departments have traveled to 13 countries in Europe and Asia to try to persuade them to draw down imports of Iranian oil to zero by Nov. 4, when US secondary sanctions on companies and countries that buy Iranian petroleum and trade with Iran’s Central Bank kick in.

Hook said the administration was not inclined to issue waivers and exemptions for countries that reduced but did not entirely end their purchase of Iranian oil, but he did not entirely rule it out.

“We are not looking to grant licenses or waivers, because doing so would substantially reduce pressure on Iran,” Hook said.

“We are prepared to work with countries that are reducing their imports on a case-by-case basis,” he said. But he said that, as with our other sanctions, the United States is not looking to grant waivers or licenses.

He sidestepped questions about countries that have expressed opposition to reducing their purchase of Iranian energy, including China and Turkey, and declined to say what the response was of countries that US officials have lobbied to demand a virtual economic blockade of Iran — particularly since it was the United States that withdrew from a nuclear deal that the International Atomic Energy Agency repeatedly reported that Iran was honoring.

Asked by a reporter about what would be said to the Chinese government because China is a signatory to the Iran nuclear deal and expressed opposition to the US withdrawal from it, Hook said, “Our diplomacy has been focused around mostly consultations with Europe, France and Germany.” He added, “Those are our allies. … We believe that China and Russia and the other countries who are part of the Iran deal are tired of the terrorism that Iran is causing. They don’t support the proliferation of missiles around the Middle East.”

But if Hook wanted to point to Europe as being on board with the Trump administration's pursuit of economic warfare against Iran, he later acknowledged that Iranian President Hassan Rouhani arrived in Switzerland today and will travel on to Austria. He seemed to urge Europe to reject diplomatic engagement with the Rouhani government.

“When you have somebody like Rouhani going to Europe … it’s important for Europeans to remember the kind of regime that they’re dealing with,” Hook said.

While the Trump administration is still working to persuade countries around the world to get on board with the maximum pressure campaign on an Iran that was complying with the nuclear deal, US officials have offered mixed signals on what they will do if Iran eventually resumes elements of its nuclear program that it curtailed under the 2015 nuclear deal in exchange for sanctions relief.

Secretary of State Mike Pompeo said the Trump administration is not inclined to use military force on Iran.

“I’m not talking … military action here,” Pompeo told conservative journalist Hugh Hewitt in an interview June 22. “Just I truly hope that’s never the case. It’s not in anyone’s best interest for that. But make no mistake, President Trump has been very clear: Iran will not get a nuclear weapon nor start its weapons program on this president’s watch.”

Asked by Hewitt if Pompeo's recent tweets encouraging Iranian demonstrators are a signal that the secretary of state is supporting democratic regime change in Iran, Pompeo did not rush to deny it.

“We are very hopeful that there will be an increase in the democratic values, and the capacity for Iranians to speak their mind inside the Islamic Republic of Iran,” he said.

While many international allies are not convinced that the Trump administration has a viable plan to contain Iran’s nuclear program if the Joint Comprehensive Plan of Action unravels, Trump’s Iran maximum-pressure campaign may solve other dilemmas for the administration, including how to look tough on the world stage while reducing US involvement in Syria and bringing more US forces home ahead of the November midterm elections.

National security adviser John Bolton suggested an ostensible agreement to get Iranian forces out of Syria may be an area where Trump and Russian President Vladimir Putin can strike a deal when they meet July 16 in the Finnish capital, Helsinki.

“There are possibilities for doing a larger negotiation on helping to get Iranian forces out of Syria and back into Iran, which would be a significant step forward,” Bolton told CBS News’ Margaret Brennan on "Face the Nation" on Sunday. “To have an agreement with Russia, if that’s possible.”

Whether that leaves Syrian President Bashar al-Assad in power is not important, Bolton said.

“This is something that the two presidents will want to discuss at length,” Bolton said. “Because I think President Trump's decision to withdraw from the misbegotten Iran nuclear deal, reimpose our sanctions [and] begin to put much more pressure on Iran is having an effect on their decision-making, not just on the nuclear issue but on these efforts to extend Iranian influence around the region.”

Trump himself, in an interview aired Sunday, expressed satisfaction at the recent Iranian protests, and said he would pressure the Saudis to increase oil output to try to contain the rising price of gas.

Trump said he would “absolutely” sanction European companies if they do business with Iran. And he said he would continue to press OPEC to increase oil output to curb the rising price of oil affected by US pressure to take Iranian oil off the market.

“Don't forget, the one negative to [leaving] the Iran deal is you're going to lose a lot of oil and they [OPEC] got to make up for it,” Trump said. “And who's their big enemy? Iran. OK? You think of it. … So they’re going to have to do it. And I have a very good relationship with the king and with the crown prince of Saudi Arabia and the others around. And they're going to have to put out more oil.”

For all its denials, the Trump administration may see pushing for Iran regime change as the solution to other problems it faces in the Middle East, including Trump’s desire to bring US troops home from Syria, said former State Department Iran adviser Suzanne Maloney.

“I think Trump sees … regime change in Iran as the answer to all of the problems in the Middle East,” Maloney, now with the Brookings Institution, told Al-Monitor. “So the quickest and easiest thing, if based on a simplistic understanding, is to get rid of the one government [they see as] at the root of all of the region’s problems. That is Iran.”

“They see the protests taking place as an opportunity,” Maloney said. “If they are economically driven, make those economic drivers even more powerful.”

“Reality doesn’t matter,” Maloney said. “Trump has now declared the deal dead. They will enforce sanctions. He is not terribly interested in having a new deal.”