The United States says won’t give in to Iranian threats as Iran is set to end compliance with the two conditions the US administration recently made impossible to meet. 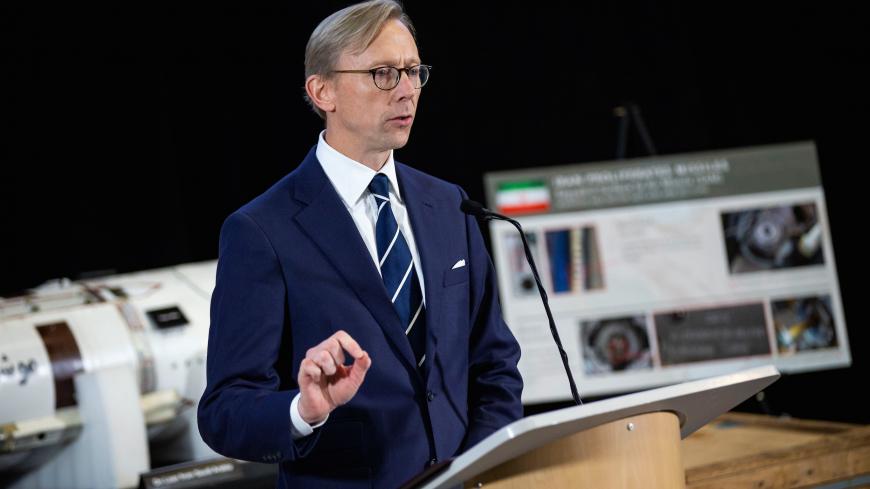 Brian Hook, US special representative for Iran, speaks about potential threats posed by the Iranian regime to the international community during a news conference at a military base in Washington, Nov. 29, 2018. - REUTERS/Al Drago

WASHINGTON — While a top aide complained of “nuclear blackmail,” Secretary of State Mike Pompeo said today that the United States would wait and see what Iran actually does after it notified the remaining parties to the 2015 nuclear deal that it would temporarily suspend abiding by caps on its stockpile of low enriched uranium and heavy water. Iran could take other measures in two months’ time if the other parties do not find a way for it to get economic benefits to stay in the deal, Iran said, but would return to those limits if they did.

“We will never be held hostage to the Iran regime’s nuclear blackmail,” Brian Hook, the US special representative for Iran, told journalists on a call today marking the one-year anniversary of the US withdrawal from the Iran nuclear deal.

The measures Iran announced in formal letters from Iranian President Hassan Rouhani to France, the United Kingdom, Germany, Russia and China were not seen as a near-term proliferation risk, arms control experts said. But they raised the specter that the “maximum pressure” campaign President Donald Trump imposed when he quit the deal last year could finally drive Iran to breach the arms control pact in the coming months and unravel it.

“I think [Rouhani’s letter] was intentionally ambiguous and we will have to wait to see what Iran's actions actually are,” Pompeo said at a joint news conference with British Foreign Secretary Jeremy Hunt in London today. “They have made a number of statements threatening actions to get the world to jump and we will see what they do. … And when they do we will make good decisions.”

Britain’s Hunt urged Iran not to take steps that would violate the deal, but acknowledged its economy is in severe distress.

“According to the letter we received, there is a 60-day window before Iran plans to do anything and they need to be very clear [on] that,” Hunt said. “If they don't comply with the [Joint Comprehensive Plan of Action], there will be consequences.”

“This is a very big moment for Iran,” Hunt continued. “Their economy is in severe distress. It is the last thing they should be doing for the Iranian people to be investing money in renuclearizing and it will make them less, not more secure.”

Iran’s letter indicates that it will stop observing caps on its stockpile of low enriched uranium and of heavy water now, but it is unlikely to exceed them before 60 days, said Ali Vaez, Iran director of the International Crisis Group.

“They’ll discard the thresholds now, but are unlikely to surpass them within the 60-day window,” Vaez told Al-Monitor.

Vaez and former US Iran deal negotiator Richard Nephew noted that the measures Iran announced were ones that the United States slashed waivers for last week and that could in effect force Iran to default.

“[It is] important to note that the two measures that Tehran has adopted (surpassing heavy water and low enriched uranium caps) are the same ones that Secretary Pompeo slashed waivers for last week,” Vaez tweeted. “Clever move by the Iranians to show where the blame lies.”

“Iran was probably going to violate this provision as a result of the US waiver decision,” Nephew tweeted. “This way, the US owns it to some degree.”

Pompeo did not acknowledge that the US waiver decision could have in effect forced an eventual Iranian default on its caps on nuclear fuel and heavy water.

“This is binary,” Pompeo told journalists traveling with him to Baghdad yesterday. “You’re either in compliance or you’re not.” He continued, “We’ve withdrawn from the agreement. The Iranians will have to make their own choice about how they want to proceed.”

Rouhani said that Iran had exercised strategic patience for the past year, but that the other parties had not done enough to compensate for the economic pressures caused by the US reimposition of sanctions on its oil and banking sectors.

“Starting today, Iran does not keep its enriched uranium and produced heavy water limited,” tweeted Rouhani. “The EU/E3+2 will face Iran's further actions if they can not fulfill their obligations within the next 60 days and secure Iran's interests. Win-Win conditions will be accepted.”

US officials took a victory lap of sorts at the economic misery the United States had been able to impose on Iran in the past year since quitting the deal, and said more is in the pipeline.

“Our campaign of maximum pressure is just getting started,” Hook said. “There is a lot more to come.”

“The president’s guidance is to continue increasing this pressure … until Iran is compelled to negotiate on terms favorable to the US,” Victoria Coates, the National Security Council's senior director for the Middle East, said on the call.

But, she added, Trump still hopes to eventually get to the negotiating table with Iran, saying, “The president’s offers to meet with the Iranian regime are sincere.”