European foreign ministers did little to hide their distress that Secretary of State Pompeo abruptly decided to consult them on rising Iran tensions, which they had warned would be a consequence of quitting the nuclear deal. 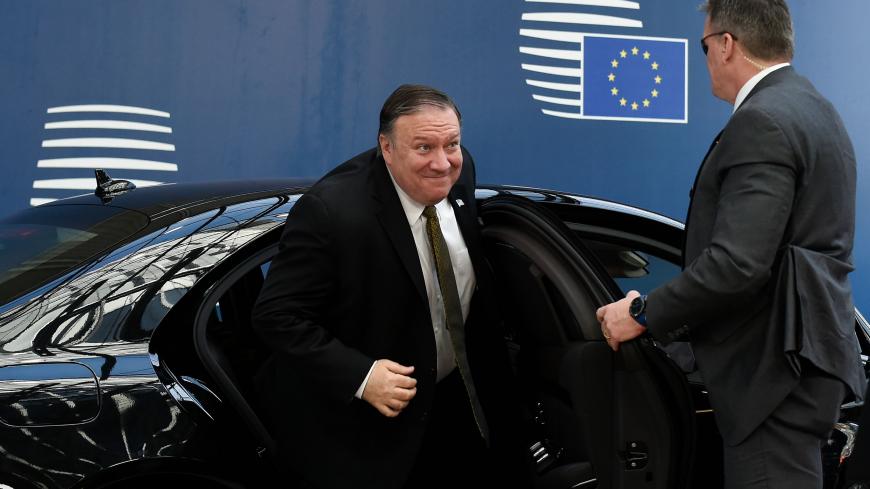 US Secretary of State Mike Pompeo arrives at the EU headquarters in Brussels, May 13, 2019. - JOHN THYS/AFP/Getty Images

WASHINGTON — While Secretary of State Mike Pompeo may have been hoping that a hastily arranged stop in Brussels today would allow for photos and headlines showing American and European unity and joint resolve in the face of rising tensions with Iran, European allies did not seem interested in playing along.

“We are very worried about the risk of a conflict happening by accident, with an escalation that is unintended really on either side,” British Foreign Secretary Jeremy Hunt said as he arrived at a meeting in Brussels with his French and German counterparts and the EU foreign policy chief today.

“The American position to increase pressure and sanctions [on Iran] doesn’t suit us,” French Foreign Minister Jean-Yves Le Drian said frankly as he arrived for the meeting.

Pompeo at the last minute decided to fly to Brussels, scrapping earlier announced plans for a visit to Moscow, where he had been due to meet US Embassy staff and business leaders. Pompeo’s eleventh-hour Brussels stopover was made en route to his first visit as secretary of state to Russia, where Pompeo is scheduled to meet with President Vladimir Putin and Foreign Minister Sergey Lavrov in Sochi tomorrow.

EU foreign policy chief Federica Mogherini did little to hide her irritation that the Americans had abruptly decided to make a show of consulting the Europeans on rising Iran tensions. Europeans had repeatedly warned the Donald Trump administration that such tensions would be a likely consequence of Trump’s decision to quit the 2015 Iran nuclear deal last year.

“We were told during the night that [Pompeo] was planning to change his travel plans and to have a stopover here in Brussels,” Mogherini told journalists ahead of the EU foreign ministers meeting. “We will be here all day with a busy agenda so we will see during the day how and if we manage to arrange a meeting. He is always welcome, obviously, but there are no precise plans for the moment.”

“Any escalation should be avoided,” she said.

Mogherini said at a press conference that she was urging both the United States and Iran to exercise “maximum restraint.”

European officials also said they would redouble efforts to get the INSTEX special purpose vehicle up and running to enable a payment system for Iran to purchase humanitarian and other goods not prohibited by US sanctions.

"We do not want it to come to a military conflict [between the United States and Iran],” German Foreign Minister Heiko Maas said he had told Pompeo in their meeting.

“Secretary Pompeo has always been diligent about sharing information with our allies as threats to peace and security warrant,” US special representative for Iran Brian Hook told journalists traveling with Pompeo. “Iran is an escalating threat, and this seemed like a timely visit on his way to Sochi."

“The secretary wanted to share some detail behind what we have been saying publicly,” Hook added. “We believe that Iran should try talks instead of threats. They have chosen poorly by focusing on threats."

“The worst case scenarios are not yet playing out, but plenty of bad things are, and they are entirely predictable things, and, in fact, they are things that advocates of the nuclear agreement, including the British, French, Germans and EU, predicted could happen,” Schake, now deputy director-general of the International Institute for Strategic Studies (IISS) in London, told Al-Monitor.

“They were not only predictable, but they were predicted,” Schake said. European governments and supporters of the Iran nuclear accord had warned the Trump administration that it could not expect to “keep all the advantages of Iran abiding by the current agreement” while the United States reimposed draconian sanctions to try to leverage “Iran into more limits on its ballistic missile program, on its destabilization of regional allies and support for terrorism.”

Pompeo’s Brussels stop came amid reports that four ships, including two Saudi oil tankers and a Norwegian vessel, were damaged off the UAE port city of Fujairah on Sunday, in what the UAE called an act of sabotage. It also came after the United States last week said it was speeding up the deployment of a US aircraft carrier, B-52 bombers and a Patriot missile battery to the region, to deter a possible Iranian threat to US forces in Iraq or US allies in the region.

If that happens, Iranian officials “won’t be happy people,” Trump told pool reporters ahead of a meeting with Hungary’s Viktor Orban at the White House. “It's going to be a bad problem for Iran if something happens, I can tell you that. They're not going to be happy … they know what I mean by it.”

Iran announced last week that it was suspending caps on its stockpiles of low enriched uranium and heavy water to pressure the remaining five parties to the nuclear deal to find concrete ways for it to get the economic incentives to stay in the deal, after the Trump administration last week cut all waivers for countries to receive imports of Iranian oil.

While Pompeo is expected to get a warmer reception from Putin in Sochi tomorrow, after Trump and Putin rekindled their warm consultations in a 90-minute phone call late last month celebrating the end of Robert Mueller's Russia probe, Russia has also expressed exasperation about the Trump administration’s hard-line position on Iran.

European governments are pushing back diplomatically against Washington amid rising US-Iran tensions, even as they have been unable to do much to keep Iran receiving economic benefits to stay in the deal, said Sanam Vakil, senior Gulf researcher at Chatham House.

“Europe is so frustrated with the United States for taking this unilateral action with regard to the [Joint Comprehensive Plan of Action],” Vakil told Al-Monitor. “It has blocked Europe from addressing the outstanding issues they all share with regard to Iran. In a way, the US actions have stalled European engagement efforts on the ballistic missile file and on regional issues. Because they have been trying to band-aid over and trying to hold on to this deal. The question is until when.”

The Europeans are signaling that they at least privately blame the Trump administration for any rise in Iranian misbehavior in the region or the nuclear file in response to US actions, said Schake.

“My guess is that Secretary Pompeo’s hope was that the [alleged] attack on the Saudi vessels in international waters would provide support for the American position that Iran needs to be more tightly constrained on all of these other areas where it poses a regional threat,” Schake said. “But America’s European allies believe we [the United States] caused this problem by withdrawing from the agreement. They are not sympathetic to letting the Iran deal collapse and the US saying, ‘We need you to stand beside us and threaten a military response.’”

“They are not going to show up for us on this,” Schake assessed of the Europeans. “It’s been clear for some time. I think the stridency of Brian Hook and of Secretary Pompeo’s diplomacy on this has not made it more likely that the Europeans will line up with us.”

A sense of growing bitterness by European allies toward the Trump administration was evident in both public and private comments in Brussels.

Pompeo "wanted a photo-op,” a senior unnamed European diplomat told the Wall Street Journal’s Laurence Norman of Pompeo crashing the EU Iran meeting in Brussels. “We declined and stuck to the plan."

“The Europeans are deeply angry,” Chatham House’s Vakil said. “They are deeply distressed. … The worry here in particular is that [US-Iran escalation] could lead to some sort of crisis that would impact European security in a serious way.”