Europe and the Donald Trump administration are increasingly at odds, as Europe tries to rescue the Iran nuclear deal and Trump tries to squeeze it into making further concessions. 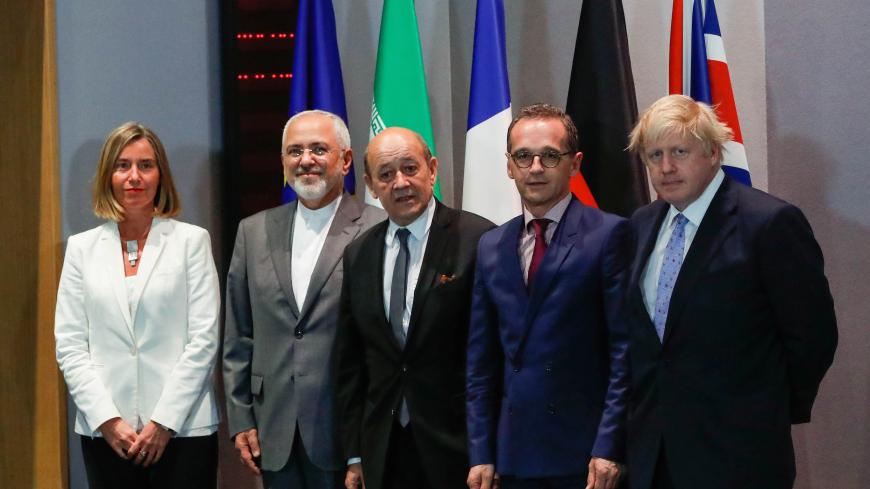 WASHINGTON — The United States sanctioned Iran’s Central Bank chief today, as European foreign ministers huddled with Iranian Foreign Minister Mohammad Javad Zarif in Brussels to see if they could rescue the Iran nuclear deal after the US exit from it last week. The divergent actions showed the Donald Trump administration and its closest transatlantic allies at stark odds over how to handle Iran policy, an area where their previous close cooperation during the last US administration had been critical in achieving a breakthrough after over a decade of nuclear talks.

“Seif has conspired with the IRGC-QF to move millions of dollars through the international financial system in a variety of foreign currencies to allow the IRGC­-QF to fund its activities abroad,” a Treasury Department press statement announcing the designations said.

“It is appalling, but not surprising, that Iran’s senior-most banking official would conspire with the IRGC-QF to facilitate funding of terror groups like Hezbollah, and it undermines any credibility he could claim in protecting the integrity of the institution as a central bank governor,” Treasury Secretary Steven Mnuchin said in the statement.

“The global community must remain vigilant against Iran’s deceptive efforts to provide financial support to its terrorist proxies,” Mnuchin said, in what seemed a pointed warning to Europe.

Some sanctions experts said the new US sanctions designations may have more symbolic than practical effects.

“Practically? Nothing,” former State Department Iran sanctions negotiator Richard Nephew told Al-Monitor of the designation’s impact. “Seif probably doesn't have any assets here, nor does anyone else on this list. It may mess with his travel here to the IMF/World Bank meetings, but I'm pretty sure we have host obligations that force us to permit his travel here and associated expenses. I see this as rhetorical in nature.”

Others said its impact would be more chilling and deter dealings with the CBI.

“It is much more than a signal. It is an incredibly aggressive move that will limit, if not effectively, bar dealings with [the] CBI,” said Tyler Cullis, an associate with Ferrari and Associates, PC, a law firm that advises on US sanctions. “You cannot effectively deal with a bank if its head is sanctioned.

But as the US administration piled on new sanctions and signaled it was not second-guessing Trump’s controversial decision to exit the Joint Comprehensive Plan of Action (JCPOA) last week, the British, French and German (or “E3”) foreign ministers were huddled with Zarif and European Union foreign policy chief Federica Mogherini in Brussels, trying to hash out a package of political and economic incentives to keep Iran in the deal, along with Russia and China.

“We will work together … on the ways in which the European Union can preserve the deal, preserve its economic investments, most of all preserve its security interests, which is avoiding that Iran can develop a nuclear weapon, which means for us preserving the deal that is working and delivering,” Mogherini said after meeting with Zarif ahead of a meeting with the British, French and German foreign ministers.

Europe would try to find ways to guarantee economic benefits to Iran even with the imposition of US secondary sanctions, on condition that Iran fully implement its commitments under the JCPOA, Mogherini said.

“This is the agreement: We stay, you stay; you stay, we stay,” Mogherini said. “And we also will share some ideas on the concrete steps to proceed in the coming days and weeks.”

“The UK and France are determined to conserve the essence of the Iran nuclear deal,” British Foreign Secretary Boris Johnson said after a meeting with French Foreign Minister Jean-Yves Le Drian on Monday. “We are going to have a proper conversation on what we can do to help UK firms, help European firms have some confidence that they can still do business … and as far as we possibly can, to protect businesses from the effect of American primary and secondary sanctions.”

The heads of state from the 28-member EU were due to have follow-up talks in Sofia, Bulgaria, on Wednesday, including on measures the EU could take to try to shield some European investment in Iran from US secondary sanctions.

Zarif sounded cautiously upbeat as he resumed a new round of shuttle diplomacy with what he called the “P4+1” — the permanent four members of the UN Security Council minus the United States, plus Germany, that negotiated the 2015 landmark deal. But he said European promises about their commitment to preserving the deal would not be enough: Iran would need guarantees.

“There are very clear economic benefits that have been specified in the JCPOA that the Iranian people have to receive in order for the … JCPOA to remain,” Zarif told journalists in Brussels. “And we will have to see whether our remaining participants in the JCPOA can deliver those benefits to Iran.”

“We are starting a process, a process that needs to be very intensive, and we don’t have a lot of time,” Zarif said, adding, “We need to reach some sort of guarantee that these benefits can be guaranteed for Iran within that specified period of time … a few weeks. We are going to see whether the political will that has been expressed by the remaining participants in JCPOA can be translated into specific action.”

European diplomats expressed deep frustration with the Trump administration for jeopardizing a nuclear deal they consider important to their countries’ security interests. They expressed bewilderment that the Trump administration thinks with a few months of unilateral sanctions on Iran, Iran will be under such economic pressure it will agree to expansive new concessions, especially after Washington abandoned the deal it had already made with Iran.

Veteran European diplomats were also troubled that the Trump administration has no apparent appreciation that jeopardizing the deal could empower Iranian hard-liners who have mocked Zarif and Iranian President Hassan Rouhani for thinking that engagement with the United States and the West could lead to a sustainable deal and benefit Iran.

Trump’s exit from the deal “will have political consequences” in Iran, a European official, speaking not for attribution, said Monday. “Trump may be right. [You] can have the collapse of the regime, though this regime has been pretty resilient the past 40 years. Or, you can have the hardening of the regime [and the] IRGC take control of the country. There will be some reaction [by] Iran. Iran is not going to simply accept the American decision.”

“We are doing our best” to put together a package of incentives to try to keep Iran in the deal, the European official said.

“At the end of the day, whether we succeed or not … [may depend on] whether we can convince the US administration … there should be some safe space [for some investment in Iran], … that the administration still benefits from seeing Iran’s [nuclear program] constrained,” the European official said.

But the Trump administration has not yet shown any sign it is ready to accept that. On the contrary, Bolton has told European interlocutors that the United States “wants the sanctions to hurt, so we are not going to exempt anyone from the sanctions.”

The Trump administration is convinced it has an opening for a nuclear deal with North Korea because of its maximum pressure campaign. “They call it the North Korea scenario,” the European official said. “Squeeze the North Koreans. Squeeze the Iranians … and they will do the same thing as Kim Jong-un … surrender.”