Iran and other world powers say they will try to preserve the deal without the United States. 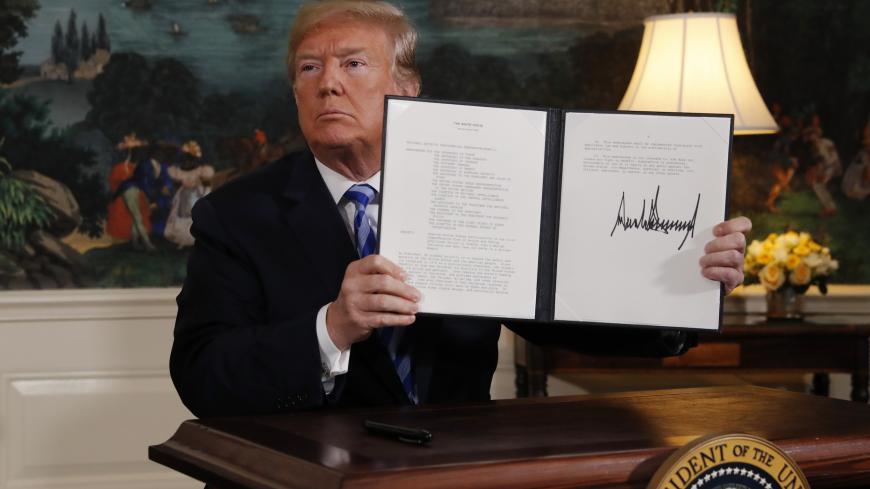 US President Donald Trump displays a presidential memorandum after announcing his intent to withdraw from the Iran nuclear agreement in the Diplomatic Room at the White House in Washington, US, May 8, 2018. - REUTERS/Jonathan Ernst

WASHINGTON — US President Donald Trump announced today that he was withdrawing the United States from the 2015 Iran nuclear deal and reimposing economic sanctions that had been waived in exchange for restraints on Iran’s nuclear program.

Iran and the five other powers that negotiated the deal — Britain, France, Germany, Russia and China — signaled that they would try to maintain the deal without the United States. But the three European leaders whose diplomats had been working intensively with the Trump administration to try to craft a compromise that would keep Trump in the deal over the past four months said they deeply regretted his decision and feared it could start to unravel global nonproliferation efforts.

“France, Germany and the UK regret the US decision to leave the JCPOA,” French President Emmanuel Macron tweeted. “The nuclear nonproliferation regime is at stake.”

“Together, we emphasize our continuing commitment to the JCPOA,” the British, French and German leaders said in a joint statement.

Trump said that while he was leaving the Iran deal, he was leaving the door open to allies and Iran to come back to the table to address his broader concerns about Iran’s behavior, including its ballistic missile program; support for militant proxy groups in Lebanon, Syria and Yemen; and sunset provisions in the current deal that allow Iran to expand its enrichment capacity after a decade.

“As we exit the Iran deal, we will be working with our allies to find a real, comprehensive and lasting solution to the Iranian nuclear threat,” Trump said in remarks in the White House diplomatic room. “In the meantime, powerful sanctions will go into full effect. If the regime continues its nuclear aspirations, it will have bigger problems than it has ever had before.”

But Trump acknowledged that Iran may not be willing in the near term to enter talks on a new deal when the United States has shown it does not live up to its commitments. Eventually, Iran’s leaders might come around, he said.

“Iran’s leaders will naturally say that they refuse to negotiate a new deal,” Trump said. “And that's fine. I'd probably say the same thing if I was in their position. But the fact is they are going to want to make a new and lasting deal, one that benefits all of Iran and the Iranian people. When they do, I am ready, willing and able.”

Trump’s new national security adviser, John Bolton, speaking to reporters after Trump’s announcement, said the United States was leaving the deal entirely and therefore would not be using the UN Security Council to try to “snap back” UN sanctions on Iran. He noted new Treasury Department guidelines advising foreign companies with certain existing business in Iran on the timetable to wind that down over the next three to six months.

“We are out of the deal,” said Bolton, a harsh critic of the 2015 accord and former Fox News analyst.

Veteran former US diplomat James Dobbins said Trump’s decision to exit the Iran nuclear deal when Iran was honoring it may prove as bad a decision as the 2003 US invasion of Iraq. As ambassador to Afghanistan after the Sept. 11, 2001, terrorist attacks, Dobbins had cooperated with then Iranian ambassador to the UN and now Iranian Foreign Minister Mohammad Javad Zarif to help Afghans form the post-Taliban government.

“Many regard the invasion of Iraq as the worst foreign policy move in the history of the American republic,” Dobbins wrote on Twitter after Trump’s announcement Tuesday. “Now we have a competitor."

“The decision to abandon the nuclear agreement with Iran isolates the United States, frees Iran, reneges on an American commitment, adds to the risk of a trade war with America’s allies and a hot war with Iran, and diminishes the prospects of eliminating the DPRK [Democratic People's Republic of Korea, or North Korea] nuclear threat,” Dobbins, now with the Rand Corporation, continued.

Iran’s President Hassan Rouhani, who has largely staked his political career on trying to engage with the international community to try to improve Iran’s economic conditions, said Iran would see if it could get the benefits from the Iran deal maintained with just the five other world powers. But he said he would order Iran’s atomic energy agency to prepare to resume expanded enrichment in case that did not succeed.

“I have ordered the Atomic Energy Organization of Iran to be ready to start the enrichment of uranium at industrial levels,” Rouhani said in televised remarks following Trump’s announcement. “We will wait a few weeks and speak with our allies and those committed to JCPOA [Joint Comprehensive Plan of Action]. All depends on our national interests.”

But Rouhani downplayed Trump’s decision to withdraw as perhaps easing the cloud of uncertainty that has hung over the deal with Trump’s threats to withdraw from it over the past year.

“The menace of a deal breaker is removed,” Rouhani said. “If our interests are guaranteed, we will continue with the ‘five.’ … Iran is even more unified to counter the illegitimate sanctions.”

Bob Corker, R-Tenn., the chairman of the Senate Foreign Relations Committee, said it was his understanding that US diplomacy to try to get a bigger deal to satisfy Trump’s broader concerns could get underway in the near term.

But European diplomats expressed deep pessimism and wariness about what US intentions were going forward and if the Trump administration even had a clear sense of its own Plan B. With the US withdrawal, the Europeans will pivot and focus more of their energy on trying to keep Iran in the deal with them and finding ways to try to ensure that Iran can derive some economic benefits that would keep them from resuming their nuclear activities. European officials expressed concern, however, that that goal would be hard to sustain for more than a limited period of months.

“I would like to pretend to you today that I feel that there is a chance of the existing JCPOA remaining intact,” a European diplomat, speaking not for attribution, said Monday. “I think that that chance may exist, but it is very small.”

“What the Europeans will try to do is simply persuade Iran to hang on a little while longer,” former US nuclear negotiator Bob Einhorn said on a call hosted by the Brookings Institution Monday. “They have no illusion that Iran will stay compliant indefinitely. … Some Europeans I spoke to suggest a few months, six months — they would be happy to buy that much time. There's no illusion that the Europeans could convince the Iranians to meet President Trump's objectives for strengthening the deal. That's just simply not a possibility.”