European nations expressed regret that Iran had exceeded a 300-kilogram cap on its stockpile of low enriched uranium, but diplomats said they were seeking ways to keep Iran in the nuclear deal. 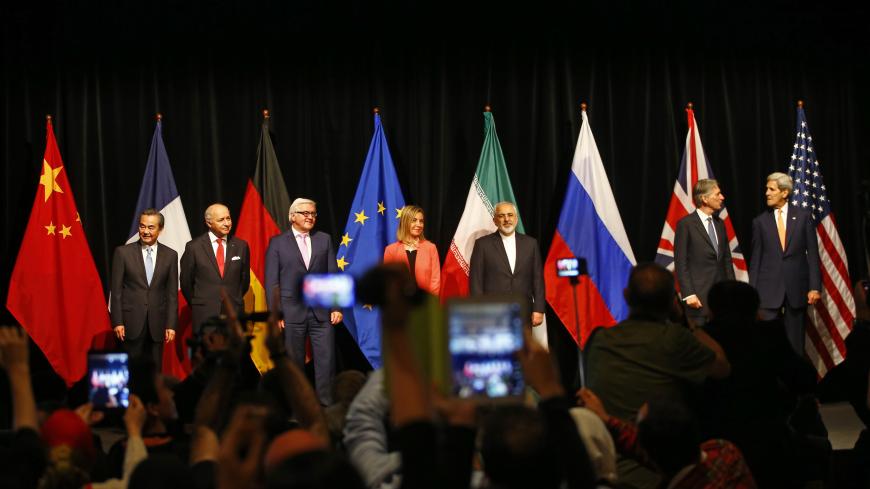 WASHINGTON — World powers on Tuesday implored Iran to return to full compliance with the 2015 nuclear deal, a day after it announced that it had exceeded a 300-kilogram cap on its stockpile of low enriched uranium. But while expressing regret at Iran’s move, European nations said they were looking to ratchet up diplomatic efforts to find ways to keep Iran in the deal, formally known as the Joint Comprehensive Plan of Action (JCPOA), and were not yet ready to declare the deal dead or to move for UN sanctions against Iran.

“We regret this decision by Iran,” the foreign ministers of France, Germany, the United Kingdom and the European Union External Action Service said in a joint statement July 2. “We are urgently considering next steps … in close coordination with other [JCPOA] participants."

A European diplomat, speaking not for attribution, told Al-Monitor July 2, “We are urging Iran to avoid taking further steps away from JCPOA, and urge them very clearly to come back into compliance.”

French President Emmanuel Macron discussed Iran with US President Donald Trump in a phone call July 1. “The two leaders discussed the Iranian regime’s decision to increase uranium enrichment levels beyond what was negotiated in the failed [JCPOA],” the White House said in a readout of the call.

Macron’s office said he would be pursuing efforts in the next days to “ensure Iran complies fully with its obligations” and “continues benefiting from the agreement’s economic advantages,” the French presidency said in a press communique July 2.

Last week, Macron said he hoped to convince Trump to ease up on sanctions to get Iran to the negotiating table.

“I want to convince Trump that it is in his interest to reopen a negotiation process [and] go back on certain sanctions to give negotiations a chance,” Macron told reporters June 27 on the train from Tokyo to Kyoto for the G-20 conference.

Iran is clearly seeking leverage to try to get Trump to back off the virtual US blockade on Iranian oil exports imposed after the United States in May revoked waivers for major Iran oil purchasers to buy reduced amounts of Iranian oil. But the INSTEX mechanism the EU is helping set up to facilitate financial transactions for Iran to purchase humanitarian items and food will not facilitate oil transactions, European officials have made clear.

“I think Iran’s goal is to make sure it gets to do some oil sales, but I think Tehran knows that’s not achievable in the short term,” Dina Esfandiary, an Iran specialist serving as a fellow at the Harvard Belfer Center and the Century Foundation, told Al-Monitor. “It also doesn’t want negotiations with the US under these conditions.”

“So I think it is looking to the EU for limited gains: some gesture where the EU puts its neck on the line versus the US and defends Iran,” Esfandiary said. “I think that would be enough to get it back into compliance and buy some time. Clearly, though, it won’t be enough long term.”

Europe is not prepared to accept a “less for less” deal, under which Iran would implement fewer nuclear deal commitments for the decreased economic benefits it is receiving after the US withdrawal and reimposition of sanctions, the statement from the European foreign ministers indicated.

“We have been consistent and clear that our commitment to the nuclear deal depends on full compliance by Iran,” the joint statement said.

Iran, in fact, is not seeking a “less for less” approach, said Adnan Tabatabai, a political analyst on Iran affairs and CEO of Germany-based think thank CARPO. Rather, he said, Iran seems to be making a “less for ‘all-or-nothing'" gambit.

Iran is “scaling down implementation to incentivize measures by P4+1 to do more for Iran‘s dividend,” Tabatabai told Al-Monitor, referring to the remaining permanent four members of the UN Security Council plus Germany that are still party to the JCPOA. “This phase will not be sustainable or the new JCPOA status quo. Iran will either go back to full implementation if Europe/Russia/China come up with meaningful compensation for US fallout, or Iran will scale implementation down even further — potentially up to a point when it says it will abandon the deal altogether.”

The deal “will be saved or collapse, but we will not see a new modus operandi of the deal,” he said.

“Iran is committed to the full implementation of the #JCPOA: as long as E3/EU implement THEIR economic commitments,” Iranian Foreign Minister Mohammad Javad Zarif tweeted July 2. “So moving forward, Iran will comply with its commitments under the JCPOA in exactly the same manner as the EU/E3 have — and will — comply with theirs. Fair enough?”

Russia’s envoy to the International Atomic Energy Agency downplayed Iran’s exceeding the 300-kilogram cap on its low enriched uranium, or LEU, stockpile, calling the cap voluntary, and blaming the United States for withdrawing the waiver under which Iran could ship out its LEU stockpile to Russia. (US nonproliferation experts said Iran shipped out most of its LEU stockpile to Russia in advance of JCPOA implementation day in 2016, but even without the waiver, could down-blend its current stockpile to stay under the limit.)

“Iran’s stockpiles of low enriched uranium exceeded 300 kg. This is a deviation from voluntary commitment under #JCPOA, but has nothing to do with a violation of [the nuclear Non-Proliferation Treaty] NPT or development of nuclear weapons,” Russian Ambassador to the International Atomic Energy Agency Mikhail Ulyanov tweeted July 2. “Ironically this is a result of US decision to sanction removal of LEU from Iran.”

The Russian envoy also mocked a White House statement that said Iran had violated the JCPOA before it existed, and which called for Iran to have no enrichment at all.

“To violate something which does not exist?” Ulyanov tweeted. “This is something new in international practice. No comment.”

The White House press secretary “stated that ‘it was a mistake under #IranDeal to allow Iran to enrich uranium,’” Ulyanov wrote. “[The] US forgets that all NPT State Parties have the right to peaceful uses of nuclear energy, including enrichment. The only problem is verification which is in place under #JCPOA.”