After exercising "strategic patience" for a year, Iran has shifted its strategy to one of calibrated escalation on the nuclear, regional and diplomatic fronts to try to secure economic relief, deter US adventurism and better position itself for possible future talks. 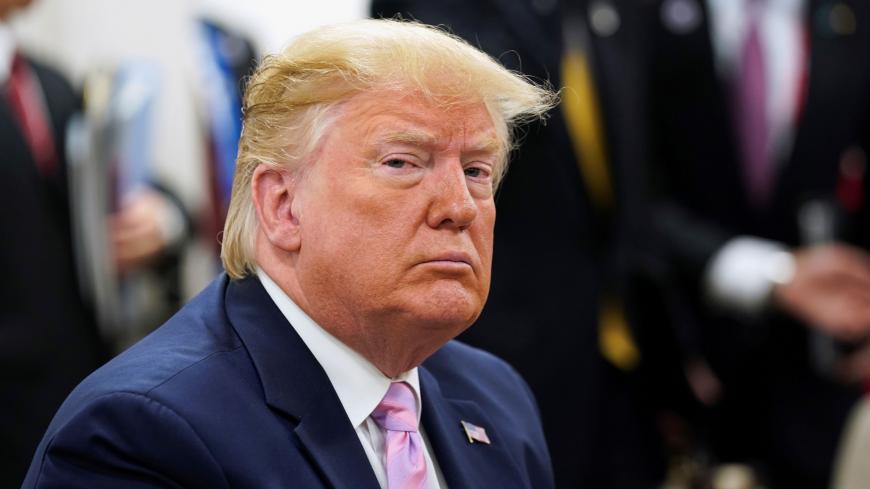 WASHINGTON — If the United States expected that a year or so of crippling economic sanctions on Iran following Donald Trump’s exit from the nuclear deal might bring the Iranians to the table ready to yield to the long list of US grievances with the Islamic Republic, Iran has flipped the script, newly shifting its strategy from one of relative restraint to one where the United States and other powers increasingly seem to be responding to Iranian actions.

After a year in which Iran responded with “strategic patience” to the US withdrawal from the 2015 Iran nuclear deal and its maximum pressure campaign, Iran has in the past month changed course, ramping up actions on the nuclear, regional and diplomatic fronts, to try to secure greater economic relief, deter the United States and — left unsaid — better position itself for possible future talks.

The United States' “maximum pressure policy breeds tensions,” Iranian Ambassador to the UN Majid Takht Ravanchi said after a stake-out at the UN Security Council June 26. “Maximum pressure is inviting violence and tension in our region.”

Ravanchi did not outright reject future dialogue with the United States, but expressed skepticism that the current atmosphere was conducive to achieve a substantive agreement.

“We are not interested to have a dialogue that does not produce actual results,” Ravanchi said. “Can we say that something will be achieved if we start a dialogue with the US now? We do not see the atmosphere.”

“As long as the sanctions are there, no one in Iran is ready to start a dialogue with the United States,” he added.

Iran’s pivot to a calibrated but more confrontational strategy to respond to a virtual US economic blockade and the recent deployment of further US military assets to the Persian Gulf has brought the countries closer to the brink of potential conflict, even as both American and Iranian leaders have repeatedly said they do not seek a war. That heightened risk was evident following Iran’s downing of a US surveillance drone on June 21. Iran said the drone had crossed into Iranian airspace. US Central Command disputed it, saying the unarmed drone was in international air space over the Strait of Hormuz conducting surveillance following sabotage attacks on foreign oil vessels in the port of Fujairah and the Gulf of Oman that the United States has attributed to Iran.

Iran’s strategic shift coincided with the Trump administration’s revocation in early May of sanctions waivers for eight nations that had been permitted to purchase reduced amounts of Iranian oil last year. It also came after the Trump administration made the controversial decision in late April to designate Iran’s Islamic Revolutionary Guard Corps as a terrorist group, despite concerns raised by the Pentagon about force protection risks and potential set-backs to the counter-Islamic State campaign. Iran in turn designated US Central Command a terrorist group.

“This is not diplomacy,” Ravanchi said. “Either decide to go for dialogue, or go for confrontation. US foreign policy suffers from a lack of cohesion.”

Iran pivots to try to get Trump’s attention, show maximum pressure is not going to be cost-free for US

“I think up to May, the Iranians were playing the strategic patience card and very carefully assessing the impact that the US maximum pressure campaign was having both politically, economically but also from the security dimension,” Ellie Geranmayeh, an Iran expert with the European Council on Foreign Relations, told Al-Monitor. “In May, after the virtual oil embargo the US imposed on Iran, the consensus in the Iranian political leadership has moved to say that strategic patience was not paying off, either with trying to create some flexibility in the American position, nor in getting the Europeans to act on delivering some components of INSTEX or other economic measures.” INSTEX is a mechanism being stood up to provide a financing vehicle for Iran to purchase food and medicine permitted under US sanctions.

“I think the idea behind the escalation on the nuclear [deal] and in the Gulf region has been to try to change the strategic calculation of both Europe and President Trump personally,” Geranmayeh said. “It is all about getting his attention on this issue, [and] highlighting that this is not going to be a cost-free policy for the United States.”

On the nuclear front, Iranian President Hassan Rouhani notified the other parties to the Joint Comprehensive Plan of Action (JCPOA) in letters in early May that Iran would exceed limits on its 300kg stockpile of low-enriched uranium and of heavy water within 60 days if they did not find concrete ways for Iran to get the economic benefits for complying with the nuclear deal it was supposed to. Further measures reducing its nuclear deal commitments could follow over the coming months if economic relief is not realized, Rouhani’s letter said.

But on June 27, when Iran had been expected to possibly exceed the 300kg limit on its low-enriched uranium stockpile, media reports citing an unnamed diplomat in Vienna said Iran was not expected to exceed the limits that day after all.

“I think it just shows that basically the Iranians are remaining pragmatic here,” Esfandyar Batmanghelidj, the founder of the Bourse & Bazaar website focused on European/Iran economic issues, told Al-Monitor.

The reported Iranian pause came after the Wall Street Journal reported June 26 — and Al-Monitor sources also said — that the three European parties to the JCPOA (the UK, France and Germany) may announce as early as June 28 that they are prepared to provide a few million euro of capital for a credit line for INSTEX.

“Iran is responding to maximum pressure with maximum resistance,” Adnan Tabatabai, a political analyst on Iran affairs and CEO of Germany-based think thank CARPO, told Al-Monitor from Iran last week. This resistance strategy has “three dimensions … and could also resemble a certain cycle of escalation.”

“The first dimension is what I would call political resistance,” Tabatabai said. “This is what we saw in the first year after the US withdrawal. So that Iran, based on strategic patience as a form of political resistance, decided to continue abiding by the nuclear agreement, thereby resisting the US approach of trying to in fact undermine the agreement.”

“But after this strategy did not really play out for Iran, they are now seeking additional steps,” Tabatabai continued. “And so what we see right now, and this would be economic resistance, … Iran is actively trying to circumvent sanctions, which they have been doing in the past as well.”

“Finally, there is obviously also the military dimension to resistance,” Tabatabai said. “I think the episode with the drone that was taken down was exactly that. And that means Iran now, in a move that certainly escalates tensions, is showcasing its capabilities to defend itself and to respond to … US aggression or threats.”

Iran’s actions to push back against the US maximum pressure campaign are meant to be calibrated and gradual, but there remains a risk of overreach, miscalculation and escalation, said Ali Vaez, director of the Iran program at the International Crisis Group.

“The thing is, the less the Iranians have to lose, the less risk averse they will become,” Vaez said, adding, “It would be quite typical of [Iranian Supreme Leader Ayatollah Ali] Khamenei to allow several policies to run in parallel.”

Khamenei apparently authorized Iranian Foreign Minister Mohammad Javad Zarif to pursue a US-Iran prisoner swap, may have authorized the Revolutionary Guard to increase tensions in the region by a notch and also allowed Rouhani to pursue a calibrated escalation in the nuclear realm, Vaez said.

“But the problem with the prisoner swap is it was preconditioned by the US, which demanded Iran release one or two Americans first to demonstrate seriousness and their ability to deliver,” Vaez said. “The problem on the JCPOA-related negotiations is they were preconditioned by the Iranians, who asked the US to provide sanctions relief as a sign of good will.”

“The solution may be to link the two, and to have the Trump administration provide Iran with some reprieve [from sanctions] in return for the release of US prisoners and allow both sides to step back from the brink, and pave the way for broader negotiations,” Vaez said.

Searching for off ramps

In the run-up to the 2020 US election campaign, heightened US-Iran tensions may “make Trump’s base nervous that there is going to be another ‘forever’ war in the Middle East,” said the European Council for Foreign Relations’ Geranmayeh. “My interpretation is that the hope from the Iranian side is that they are escalating to bring themselves on a more equal footing with the Americans, then de-escalate, hopefully.”

“That would create a face-saving way for negotiations on the Iranian side,” she said. “My read of the situation is that before Iran enters any negotiation path with the US side, they need some sort of signal that the Americans are genuine about a diplomatic solution. Part of that needs to be an easing of sanctions.”

French President Emmanuel Macron said June 27 he will urge Trump at the G-20 meeting this week to ease some sanctions to try to get on a negotiating path with Iran.

“I want to convince Trump that it is in his interest to reopen a negotiation process [and] go back on certain sanctions to give negotiations a chance,” Macron told reporters on the train from Tokyo to Kyoto, Reuters reported June 27.

Geranmayeh said she has been urging European leaders to deliver such a message to Trump.

“What I have been arguing with the Europeans is that they should do outreach … to Trump, communicating that if you are serious and want a deal with Iran, you need to create some breathing room for Iran to be able to enter those negotiations,” she said.

“My suggestion to the E3 [UK, France and Germany] is they need to stage an intervention at the G-20 — with the Russians, the Chinese, the Indians” to press this message on Trump, Geranmayeh said.

“I think from my discussions with the Russians that the Russians are looking for any opportunity to coordinate with the Europeans when it comes to Iran policy,” she said. Until now, however, she added, “From my understanding, attempts by Moscow with both the Americans and Iranians to facilitate mediation has not been responded to positively by either side.”

Geranmayeh noted, “I do think the Europeans stand a better chance of having influence on Trump’s thinking if they bring the Russians on board, and other countries.”

by Murielle KASPRZAK and Joseph SCHMID | AFP | May 26, 2022
END_OF_DOCUMENT_TOKEN_TO_BE_REPLACED