The Art of the Deal: Trump turns to Putin on Iran

‘A diplomatic way out’; Iran’s patience runs out; Trump has ‘all the time in the world’; Oil for Food 2.0?; Iraq, Afghanistan and prisoners: Steps in the right direction? 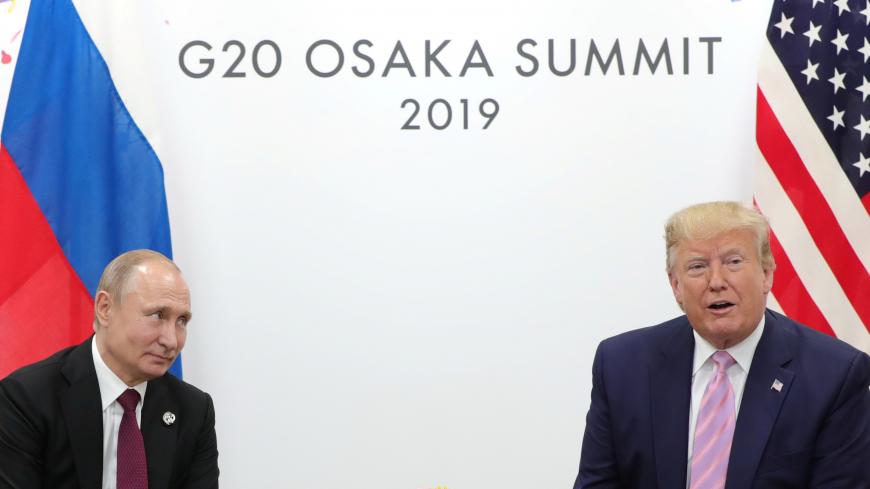 Presidents Vladimir Putin and Donald Trump attend a meeting on the sidelines of the G-20 summit in Osaka, Japan, June 28, 2019. - Sputnik/Mikhail Klimentyev/Kremlin via REUTERS

US President Donald Trump has not given up the diplomatic track on Iran. In the absence of direct talks, Russian President Vladimir Putin, who met with Trump June 28 at the G-20 summit in Osaka, is now center stage. Putin may be the only potential mediator left with the stature and diplomatic chops to prevent both the collapse of the Joint Comprehensive Plan of Action (JCPOA), or Iran deal, and a conflict spiral in the Gulf. Whether the Russian president can pull it off, and what he might ask in return, and whether there are other options on Iran, are all open questions.

'A diplomatic way out'

Trump and Putin “confirmed that they want to find a diplomatic way out,” Russian Foreign Minister Sergey Lavrov said after the 80-minute summit in Osaka. A meeting of US, Israeli and Russian national security advisers in Jerusalem two days earlier focused on Iran, as Maxim Suchkov, Marianna Belenkaya and Ben Caspit reported.

Putin appears to prefer tensions on a low boil, which allows him to step up as the "go-to" guy in the region. He alone has close ties with his counterparts in both Iran and Israel, as well as Syria, and enjoys a “very, very good relationship” with Trump, according to Trump.

The Russian president has made clear that he is not bailing on Iran in Syria, whatever the differences may be between Tehran and Moscow in the country, yet he also said Russia is not a “firefighting rescue crew” if Tehran withdraws from the JCPOA, as we reported here.

With regard to Syria, Lavrov referred to follow-up on the initiatives in Helsinki last year, signaling that Putin may again launch a renewed effort to broker some type of de-escalation or process to reduce tensions on the Syria-Israel border, as we wrote here.

Putin also discussed with Trump a Russian proposal to work with the United Nations to strengthen regional security and confidence-building between the Arab states of the Gulf and Iran. Iran Foreign Minister Mohammad Javad Zarif proposed a “Regional Dialogue Forum in the Persian Gulf” last year in the Financial Times. Iranian officials have confirmed, off the record, their receptivity to this initiative.

The question is whether Riyadh and Abu Dhabi will be inclined to engage. They will of course look to Washington for the nod before doing so.

Even with Trump’s go-ahead, the question is whether what Putin can offer Iran is too little, too late, before the crisis spills over.

Iran’s "strategic patience" has run out, Laura Rozen explains. The Islamic Republic is getting creamed by US sanctions. Iran’s oil exports have dropped from a high of 2.7 million barrels per day (bpd) in April 2018 to probably half a million bpd this month. The International Monetary Fund predicts a 6% contraction in Iran’s economy this year, after shrinking 3.9% in 2018.

The new sanctions on Supreme Leader Ayatollah Ali Khamenei, and reportedly soon on Zarif, are insult upon injury in Tehran. Khamenei shut down the prospect of diplomacy with the United States, saying June 26 that the United States is the “most vicious government of the world” and that "negotiation is an effort to deceive [Iran] into doing what the US desires."

Iran’s frustration is not just with the United States. Zarif bet big that European countries would step up with a financial workaround for US sanctions, called INSTEX, by July 8. Iran wants the program funded by purchases of its oil exports. European nations are scrambling to get that program going by Iran’s deadline.

Even if they do, it may not be enough. “Personally, I don’t think it will be enough,” Iran’s UN Ambassador Majid Takht Ravanchi said. “It took them more than a year to put this in place, and it’s still not operational.”

Iran is looking for support from Asian and Eurasian countries to compensate, but as Alireza Noori points out, these ties have “limited potential” for Iran. The Shanghai Cooperation Organization and the Conference on Interaction and Confidence-Building Measures in Asia both nixed membership for Iran, not wanting to get drawn into US-Iran tensions.

Iran is warning that it not only might exceed enrichment levels laid out in the Iran deal, but would consider withdrawing from the Nuclear Non-Proliferation Treaty.

Khamenei has rallied his government around a sense of siege, if not outright fatalism, that Iran’s economic conditions will worsen, and that a confrontation with the United States is possible. The Islamic Republic is therefore pushing back, in a measured way, keeping its actions below a threshold that would merit a US military response. Resistance is now a matter of pride. By shooting down an American drone, Iran claimed it was defending its borders. But the United States, which claims the drone was over international waters, was "locked and loaded." The risks of conflict remain high, especially absent a diplomatic channel.

Trump: 'All the time in the world'

Trump says he has “all the time in the world” while Iran suffers under US sanctions to reconsider his offer to talk. He also set a clear red line that any Iranian attack on Americans “will be met with great and overwhelming force. In some areas, overwhelming will mean obliteration.”

But a fateful decision on the JCPOA approaches in August. Leading Republicans advocate ending waivers that allow countries to help Iran with its nuclear program, picking up on an article by Michael Doran in Mosaic. Al-Monitor reported back in April that these waivers may be the "fatal flaw" in the JCPOA. Some advocates of a harder line on Iran believe the case can already be made that Iran is in violation of the nuclear deal, based on seized Iranian nuclear documents now based in Israel.

French President Emmanuel Macron, also at the G-20, is appealing to Trump to reconsider the maximum pressure policy and walk back some sanctions to give diplomacy a chance.

Walking back sanctions may be a reach, but perhaps the deal is a compromise around INSTEX, allowing Iranian oil exports to purchase goods allowed under US sanctions, such as food and medicine. The United States, for its part, would hold off on further sanctions and renew the JCPOA waivers.

For Putin, working the angles with the United States, Iran, Israel and Syria is an uncertain and heavy lift, but he loves the game. His interests are not directly aligned with any of the parties, but he comes out ahead by the effort. Russia stands to benefit from expansions in civil nuclear and other trade with Iran, via its own financial institutions, and to leverage his influence with all parties in Syria. Down the road, he expects his own deal on relief from US sanctions, but that seems a long shot for now. Putin, we have written time and again, doesn’t work for free.

Iraq, Afghanistan and prisoners: Steps in the right direction?

Although Takht Ravanchi told Rozen “as long as the sanctions are there, no one in Iran is ready to start a dialogue with the United States,” the United States and Iran might consider some quiet diplomacy, either directly or via intermediaries, on Afghanistan and Iraq. Both countries support the governments in Baghdad and Kabul. In Iraq, President Barham Salih and Prime Minister Adel Abdul Mahdi have fashioned a regional strategy based upon comity and engagement with neighbors, including Iran. And both are good friends of the United States. Iraq is on the front lines of any potential US-Iran confrontation. The destabilization of Iraq would be a devastating blow for the United States, Iraq and the region.

The United States and Iran worked together in Afghanistan after Sept. 11, 2001. They can pick up that thread again, especially as the United States seeks to draw down its forces there.

And then there are the Americans detained in Iran. Secretary of State Mike Pompeo told Hugh Hewitt last month that it is "absolutely the case that were [Iran] to release these Americans who are wrongfully held, it would be a good thing. It would be a step in the right direction for sure."