Why rejoining Iran nuclear deal isn’t so easy, even if Biden wins

A new Iran deal should consider the “gold standard” energy pact by the UAE and include a regional dialogue on the peaceful use of nuclear power. 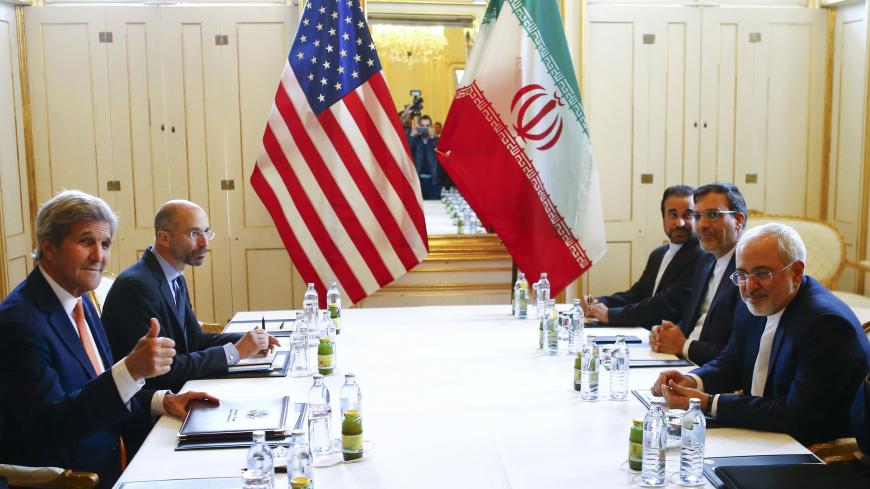 US Sen. Chris Van Hollen, in a podcast with Al-Monitor this week, said that Saudi Arabia should be held to what he called the "gold standard" of civilian nuclear agreements: no domestic enrichment of uranium (which, at high levels, can be used to produce nuclear weapons) and adherence to the Additional Protocol of the International Atomic Energy Agency (IAEA), which allows for more expansive verification and inspection by the IAEA.

This gold standard is what the United Arab Emirates calls its civil nuclear deal with the United States, which includes both conditions.

And if it’s good enough for Saudi Arabia and the UAE, maybe zero enrichment should be the standard for Iran too.

Indeed, a regional dialogue on civilian nuclear power should be part of the next wave of discussions about a new or revised nuclear deal, as the Joint Comprehensive Plan of Action (JCPOA), as we know it, is on shaky ground, even if Joe Biden wins the presidential election.

Both US President Donald Trump and former Vice President Biden have signaled that after the elections there will be a new round of diplomacy with Iran, as we discussed here three weeks ago.

Trump has said he is ready to negotiate a new deal with Iran. Despite his rejection of the Iran nuclear deal, Trump wants his own, better deal with Iran, and has consistently expressed his interest in direct talks with Iranian President Hassan Rouhani. Indeed, often overlooked is that US Secretary of State Mike Pompeo has said he is willing to talk to Iran "with no preconditions," in the context of a 10-point agenda for what the United States wants to see Iran change in its policies.

Biden, for his part, has said that the United States would rejoin the JCPOA if Iran returns to "strict compliance.” But Biden, like Trump, also seems to want a new deal. He writes that rejoining the pact is “a starting point” for negotiations to strengthen and extend the JCPOA, "while more effectively pushing back against Iran’s other destabilizing activities."

Iran, so far, is rejecting the pitch from both candidates.

First, Iranian Foreign Minister Mohammad Javad Zarif, speaking this week at the Council on Foreign Relations, said Iran is “absolutely not” going to negotiate a new or revised nuclear deal, adding that the United States must compensate Iran for the "billions upon billions of dollars’ of economic damages as a result of the US sanctions." Neither Trump nor Biden is likely to provide Iran a payout for its tally of the costs of sanctions.

Second, there is the issue of Iranian compliance. According to the last IAEA report in June, Tehran had not allowed access or provided adequate answers regarding two sites that may have been "related to possible undeclared nuclear material and nuclear-related activities in Iran." While a flurry of meetings and promises by Iran cheered the IAEA and the EU last month, the proof of Iranian compliance will be in subsequent reports.

Third, there are the "facts on the ground" since 2018: the expiration of the arms embargo on Iran and the blizzard of US sanctions on Iran since the Trump administration withdrew from the deal. By accepting the JCPOA, a Biden administration would need to accept likely Russian and Chinese arms sales to Iran, as we report here, a tough pill to swallow if Biden and the United States remain concerned about Iran’s "destabilizing activities.” And would Biden simply end all the Trump sanctions, as Iran would expect, or would it go case by case, maybe expecting something in return?

…and three suggestions for the next round of Iran diplomacy

A second Trump or first Biden administration will be negotiating with Iran, one way or another. Iran’s hard-line position now is no surprise, given that prospect, but the hedge here is that Iranian officials will be ready to talk. Iran is hurting badly as a result of US sanctions and its interest is in getting sanctions lifted.

The Europeans want the United States back in the fold. The alternative to diplomacy could well be nuclear proliferation in the Middle East, which the JCPOA sought to prevent. Any progress on Iran will also require diplomacy with Russian President Vladimir Putin and Chinese President Xi Jinping, who have both deepened ties with Iran over the past three years.

Here are three suggestions to inform the next round of difficult diplomacy with Iran, building on the JCPOA.

First, there needs to be a regional dialogue on cooperative and safe approaches to the development of civilian nuclear power, as well as the well-established and vexing regional security issues. US partners in the region can’t be on the sidelines of the talks this time. Israel’s Ambassador to the US Ron Dermer told Al-Monitor that the JCPOA was a "failed experiment." No new deal with Iran is going to work if Israel is opposed: lesson learned. Unlike the JCPOA negotiations, Biden or Trump, depending on who wins, will hear out Israel and the key Gulf states in the next round.

Despite Iran’s unsurprising negative reaction to the UAE-Israel normalization deal, UAE-Iran ties had otherwise been improving. The diplomatic door may not be shut, as Iran’s leaders no doubt see the normalization deals are directed against them. The UAE can start the conversation about nuclear power, a dialogue that should eventually include the other Gulf states, the IAEA and the signatories to the JCPOA.

The roadblock is that Iran has been adamant that it has a "right" to enrich uranium, as a signatory to the Nuclear Non-Proliferation Treaty. Its nuclear program is driven by concerns not just about the Gulf states, but Israel, which has nuclear weapons, as well as the United States.

Such a conversation will be a long slog, and a very long shot, unless a Trump or Biden administration is content again to grant Iran its "right" to enrichment, as was done in the JCPOA.

“I don’t know if Iran’s receptive” to the UAE model of nuclear development, UAE Minister and Ambassador to the United States Yousef Al-Otaiba told Al-Monitor, “but I know it hasn’t really been positioned; it hasn’t been used as a template.”

Second, Bobby Ghosh of Bloomberg writes that a subsequent Iran deal should include a US-Iran treaty, which did not happen with the JCPOA. A treaty would validate the deal with the US Congress and the American people, and cannot be overturned by executive order, as Trump did with the Iran agreement. Ghosh views the prospects for a treaty as more likely with a Biden win and Democratic control of both houses of Congress. The treaty option would more effectively institutionalize the deal, and should be an incentive for Iran to negotiate. But don’t rule out a treaty under Trump, if he wins and there are talks. Pompeo, for his part, has said the next Iran deal should be a treaty.

Third, the first order of business for building confidence and simply doing the right thing should be an exchange of prisoners. Zarif said this week that Iran is ready for an exchange of Iranians held in the United States or elsewhere in return for the dual-national prisoners being held in Iran, as we report here. This is one book that needs to be closed as quickly as possible.

Absent a new round of US-led diplomacy with Iran, the region faces the prospect of increased destabilization in Yemen, Syria, Iraq, Lebanon and the Gulf, as well as a possible nuclear arms race. If Iran goes for the bomb, Saudi Arabia and Turkey are likely to follow. The alternative, of a region working collaboratively to harness peaceful nuclear energy and de-escalate conflicts that have gone on too long, seems a better bet for the region.