The Takeaway: What to expect in next round of Iran nuclear talks 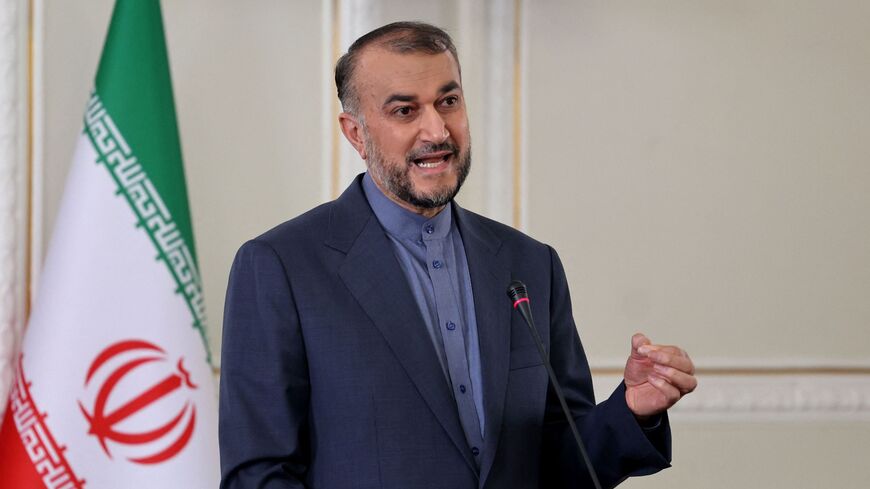 Iranian Foreign Minister Hossein Amir-Abdollahian speaks during a press conference with his Syrian counterpart in the Iranian capital Tehran, on Dec. 6, 2021. - ATTA KENARE/AFP via Getty Images

The fate of the Joint Comprehensive Plan of Action (JCPOA, or Iran nuclear deal) hangs in the balance as negotiators gear up for another round of talks in Vienna on Thursday.

How we got here:

-The United States, United Kingdom, France, Germany, the European Union, Russia, China and Iran agreed to the JCPOA in July 2015. UN Security Council 2231 (2015) endorsed the nuclear deal (read the resolution and nuclear agreement here). The crux of the deal is economic sanctions relief for Iran in return for Iran’s compliance with constraints on its nuclear program, enforced by the International Atomic Energy Agency, to assure that Iran does not acquire a nuclear weapon.

-US President Donald Trump withdrew from the JCPOA in May 2018 and reimposed and added new sanctions on Iran, which affected Iran’s ability to export oil and engage in international trade and finance, hurting Iran’s economy. Iran responded by accelerating its production of highly enriched uranium (HEU), required to produce a nuclear weapon, and reducing compliance with the IAEA.

- US President Joe Biden assumed office in January 2021 ready to negotiate the US re-entry into the JCPOA, if Iran also were to return to compliance. Six rounds of talks took place between April and June 2021. The talks paused following the election of Iranian President Ebrahim Raisi, who took office on August 3, 2021.

- The IAEA said in September in 2021 that Iran’s restrictions on access to its facilities were seriously compromising the agency’s oversight. In August, the IAEA noted that Iran was enriching uranium at 60%, well above the 3.67% cap in the JCPOA. HEU at 90% purity is required for nuclear weapons.

The seventh round of talks took place Nov. 29-Dec. 3. The talks resume on Dec. 9 amid recriminations between the West and Iran about the intentions of the other.

-A senior US State Department official on Dec. 4 blamed Iran for "continuing to accelerate their nuclear program in particularly provocative ways," while offering no "serious proposal" to advance the talks. Read the official’s brief here.

-Iran Foreign Minister Hossein Amir Abdollahian has said that the burden is solely on the US to lift all sanctions, as it was the US that quit the deal in 2018, so there is not even a need to talk. He wrote on Dec. 8 that lifting sanctions, improving commercial ties, and sustainable economic cooperation are the primary aims of the negotiations.

- The IAEA on Dec. 1 reported that Iran is enriching uranium with more advanced centrifuges at the Fordow Iranian nuclear facility, in violation of the JCPOA.

What the experts are saying:

-Opening bid or red line?: "I’m leaning towards thinking this is more of an opening bid," for Iran, said Trita Parsi, executive vice president at the Quincy Institute for Responsible Statecraft. But Parsi notes that the Iranian delegation in Vienna has less experience than the country’s previous negotiators, “which means that even if it is ramping up things in order to negotiate, it may not know how to recalibrate that so that the ramping up does not end up becoming destructive.”

-Hardball continues? Iran is willing to play hardball longer to see how urgent the demand for a deal is, said Behnam Ben Taleblu, a senior fellow at the Foundation for Defense of Democracies. “If there’s any change, it won’t be a change up until the very end, where the slightest modification will be forced to be interpreted by a pressure-hesitant West as a walking back of Iran from its red lines,” Taleblu said. “There will be a kind of over-inference of Iranian intentions to negotiate.”

- Time vs diplomacy: For now, there’s a “diplomatic stalemate where neither party can afford to show flexibility lest it would be interpreted by the other side as a sign of weakness,” said Ali Vaez, the International Crisis Group’s Iran project director. Should negotiators fail to make progress in the Austrian capital this week, the United States is likely to escalate through more sanctions and pressure at the IAEA, he said. “Another race of sanctions against centrifuges is not just lose-lose for both sides; but it is also riskier than ever given Iran's rapid nuclear advancements,” Vaez said. “The fact is that the nuclear clock is ticking faster than the diplomatic one.”

-Despite the grim assessments of round seven and low expectations for a deal, the expert/technical committees for the JCPOA parties have kept talking and exchanging papers on the choreography and details of lifting sanctions in return for Iran’s compliance with the IAEA. Amwaj has the scoop here.

- As we wrote here last week, Amir-Abdollahian may be looking for a sign that the US has so far been reluctant to give. The foreign minister said last week that “there must be a ‎sign proving that they were determined and serious and that they had to make a ‎move to demonstrate their goodwill; for instance, by releasing $10 billion of Iran’s ‎frozen assets.”

-Israeli Defense Minister Benny Gantz is in Washington this week as part of a diplomatic blitz by Jerusalem, which opposes the JCPOA,  to press for even more sanctions and the need for a credible military deterrent in dealing with Iran.

Bijan Khajehpour breaks down what’s in the economic plan unveiled by Iranian finance minister Ehsan Khandoozi. The government’s priorities include strengthening the national currency, containing foreign exchange fluctuations and eliminating speculative foreign exchange trading. But as Khajehpour writes, “the reality on the ground will be more relevant than any plan,” and much hinges on whether sanctions relief is secured in the Vienna talks.

2.   Should the Biden administration back Saudi defense reform?

The US Senate on Tuesday rejected a bipartisan resolution that would have stopped the export of some $650 million worth of air-to-air missiles and related equipment to Saudi Arabia, which the Biden administration said were needed to defend against Houthi attacks.

Although Saudi Arabia is appealing for a resupply for its missile defenses, as the Wall Street Journal reports here, progressive lawmakers, anti-war and human rights groups, and some Republicans criticized the sale, arguing the weapons would prolong the civil war in Yemen.

In an op-ed for Al-Monitor, Amal Altwaijri makes a different case: that the US should not only keep up arms sales to Riyadh, but for Washington to back a defense reform initiative already underway in the Gulf country.

Sudan's newly reinstated prime minister, Abdalla Hamdok, has suspended all government appointments and is reviewing those issued by Sudan's top general-turned-coup leader Abdel Fattah al-Burhan. Baher al-Kady has the reaction from Egypt, whose own democratic experiment was upended by a military coup.

Elsewhere in Sudan, Mohamed Saied has this report on the deadly clashes between Sudanese and Ethiopian forces in the long-disputed disputed agricultural region of al-Fashaqa. The border dispute is also adding to the tensions over Addis Ababa’s filling of the Grand Ethiopian Renaissance Dam, which Khartoum is concerned will disrupt its water flows.

Tensions are running high in Hebron, the West Bank city long seen as a microcosm of the Palestinian-Israeli conflict. Late last month, Israeli President Isaac Herzog stirred controversy when he lit a Hanukkah menorah at the city’s revered Ibrahimi Mosque, which is known to Jews as the Tomb of the Patriarchs. Ahmad Melhem reports that Hamas and other Palestinian factions call for unrest in response to Herzog’s candle-lighting, which was also condemned by several left-leaning Israeli groups.

Archaeologists digging in Luxor have unearthed hundreds of ancient offerings to an Egyptian fertility goddess. Among them were figurines of naked women with long braids and amulets depicting a woman with cow ears. But as Rasha Mahmoud reports, just who exactly is buried in the tomb remains a mystery.

One Cool Thing: Robots take your order in Mosul

A new restaurant in the Iraqi city of Mosul is serving Western dishes with the help of a robotic waiter, in what Salah Hassan Baban says is meant ”convey a clear message to the world that the city has overcome war and destruction” after several years under Islamic State control. The robot, which was programmed by engineers at the University of Mosul, functions as an electronic waiter in full uniform that responds to special electronic menus and carries a tray to deliver orders. Get a look at the robo-waiter here.