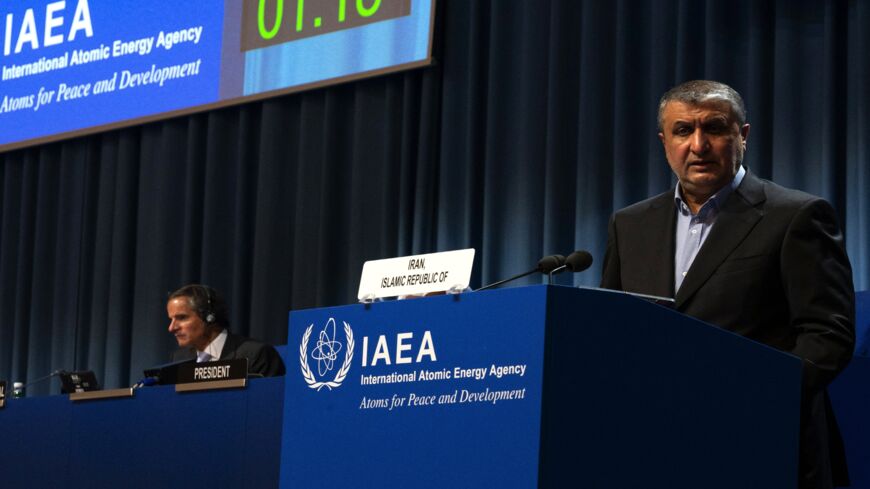 Hot take: Iran looking for goodwill gesture by US to overcome mistrust

Talks between Iran and other parties to the Joint Comprehensive of Action (JCPOA), or the Iran nuclear deal, are scheduled to resume in Vienna Nov. 29, and the expectations could hardly be lower. Iran and the United States haven’t yet agreed on who goes first in getting to a return to “mutual compliance.” And there’s an ominous backdrop, with worries that Israel may be ramping up preparations for a military strike to derail Iran’s nuclear program.

Background: The JCPOA was signed in 2015 by the United States, Iran, the United Kingdom, Germany, France, Russia and China. The deal was that Iran would get relief from longtime economic sanctions in return for agreeing to constraints on its nuclear program, enforced by fairly intrusive inspection and monitoring by the International Atomic Energy Agency (IAEA). The Trump administration unilaterally withdrew from the JCPOA in May 2018 and restored US sanctions on Iran. Tehran responded by accelerating production of highly enriched uranium (HEU), which could theoretically be used for weapons. Negotiations to reactivate the JCPOA began this year after the Biden administration came to office but ended in June after the election of Ebrahim Raisi as president of Iran.

What the IAEA is saying: The IAEA said in September that Iran’s restrictions on access to its facilities were seriously compromising the agency’s oversight. In August, the IAEA noted that Iran was enriching uranium at 60%, well above the 3.67% cap in the JCPOA. HEU at 90% purity is required for nuclear weapons development.

What the US is saying: On Nov. 4, US State Department spokesperson Ned Price said that the “first priority is to … negotiate a mutual return to compliance with the JCPOA” and, if that is achieved, use the JCPOA as “a baseline to negotiate … not only to lengthen and strengthen the provisions of the deal, but to put on the table and to discuss, in a productive and hopefully useful way, other issues of concern … not only to the United States, but also … to our allies and partners in the region.”

What Iran is saying: Iran Foreign Minister Hossein Amir-Abdollahian said in an interview this month that “there is no need for negotiations” and the burden is on the Biden administration via executive order to lift all sanctions imposed by Trump, adding that he told EU High Representative/Vice-President Josep Borrell that they (the United States and the EU) are “required to make efforts and rebuild the lost trust … [and] that we would return to the negotiating table, but that he also had to pressure the US to ‎honor its pledges.”‎ Iran has said it will return to compliance after the United States has reversed the sanctions.

What Israel is saying: IDF Chief of Staff Lt. Gen. Aviv Kochavi said on Nov. 9 that “the IDF is accelerating the operational plans and the readiness to cope with Iran and with the military nuclear threat.”

Our take: Looking for a sign: The United States and Iran can’t agree on the choreography of a return to “mutual compliance.” Iran insists that the burden is on the United States, as the party that stepped away from the deal. But Iran has also hinted at an interim step. Amir-Abdollahian also said last week that “there must be a ‎sign proving that they were determined and serious and that they had to make a ‎move to demonstrate their goodwill; for instance, by releasing $10 billion of Iran’s ‎frozen assets.” There is also another leverage point: the case of the four US-Iranian dual nationals held in Iran. As Mark Fitzpatrick wrote in September, “If there is to be a way forward, humanitarian actions could provide the key. Prisoners could be exchanged on humanitarian grounds. Separately, the United States should make a unilateral gesture on humanitarian grounds to see that the exemption for medical supplies built into US sanctions regulations is actionable in practice.”

Young men and women in Saudi Arabia are wearing bikinis, smoking hookah and dancing with the opposite sex at a new beach and floating water park in the country’s Jeddah region, alarming conservatives who disapprove of the Islamic kingdom’s rapidly changing social norms. The opening of “Pure Beach,” where for 300 Saudi riyals ($80) beachgoers can soak up the sun without gender segregation restrictions, comes amid the economic and social overhaul launched by Saudi Arabia’s de facto leader, Crown Prince Mohammed bin Salman. Many young Saudis have embraced the recent changes, but as Hussein Nagah reports, other, more conservative Saudis view the social liberalization as a waste of money and an insult to longstanding Saudi tradition.

The health of Turkish President Recep Tayyip Erdogan is a constant subject of speculation in Turkey, where authorities have begun cracking down on the rumor-spreaders. The consensus seems to be that the 67-year-old Turkish leader is suffering from some undisclosed health issue, Pinar Tremblay writes. Fueling the rumors was a recent video showing Erdogan appearing confused and struggling to walk. The government tried quelling the rumors by publishing its own video showing Erdogan walking as normal, in a move that only led to more ridicule.

Then there was Erdogan’s last-minute cancelation of a planned trip to the climate summit in Glasgow (his team blamed security concerns). The Turkish leader’s daily public schedule was temporarily scrubbed of meetings, unleashing a torrent of speculation on social media. Turkish authorities have since announced they are investigating dozens of people who posted “manipulative content” to Twitter under the hashtag #olmus — Turkish for “dead.”

The recent passage of Israel’s 2021-2022 state budget marks an unmistakable victory for Mansour Abbas, chair of the United Arab List (Islamic Ra’am Party). The new budget contains several hard-won Ra’am Party accomplishments, including a five-year, $9.6 billion plan for the socioeconomic development of Israel’s Arab community and the creation of a new Bedouin city in the Negev.

As Afif Abu Much writes, Ra’am, which in June made history as the first Arab party to join an Israeli coalition government, faced significant pushback during budget negotiations. The Joint List, the largest Arab party in the Knesset, equated voting for the budget to voting for Jewish settlements and occupation. On the other side, former Prime Minister Benjamin Netanyahu’s conservative Likud Party portrayed Ra’am members as supporters of the Gaza-based militant group Hamas. Mazal Mualem reports here on Abbas’ meeting this week with King Abdullah of Jordan, which was slammed by Netanyahu.

British Prime Minister Boris Johnson mentioned the Egyptian port city of Alexandria as being threatened by rising water levels should Earth’s temperature rise by 4 degrees Celsius as some climate scientists are warning.

Johnson’s remarks provoked a wave of concern and skepticism about the climate threat to Alexandria, as Yasmin Mohamed reports.

Egyptian President Abdel Fattah al-Sisi, in his speech at Glasgow, called on developed countries to fulfill their pledge to provide $100 billion a year for addressing climate change in developing countries.

Egypt’s Dar al-Iftaa, the main body for religious rulings, will now offer training for newly engaged couples. Dar al-Iftaa is “aware of the danger of early divorce” and will roll out “a number of initiatives to tackle this phenomenon,” Egypt's Grand Mufti Shawki Allam said last week. The Dar Al-Iftaa reportedly hears about 5,000 divorce petitions a month, only about five of which actually materialize. Egyptian experts quoted by ​​Ibrahim Ayyad primarily blame social media for the country’s high divorce rates.

The last remaining breed of Pharaonic bees can be found at Wadi Al-Assiut, an 8,000-acre nature reserve that serves as a home for a range of endangered species and wild plants outside the city of Assiut. The bees, whose ancestors stretch back millennia, produce a special type of honey with supposed medicinal benefits. But as Rasha Mahmoud reports, the beekeepers warn the cash-strapped nature preserve isn’t getting the tourism attention needed to sufficiently fund its important work.

It won’t be long before the Middle East and North Africa has its own “TikTok moment,” says Noor Sweid, general partner at UAE-based venture capital firm Global Ventures. In an interview with Andrew Parasiliti, Sweid argues that the MENA region is on the cusp of becoming a global tech hub, thanks in part to a younger generation driving innovation. “It’s not that we’re trying to think outside the box, it’s that there is no box,” Sweid says of the region’s entrepreneurs. Listen to the podcast here.