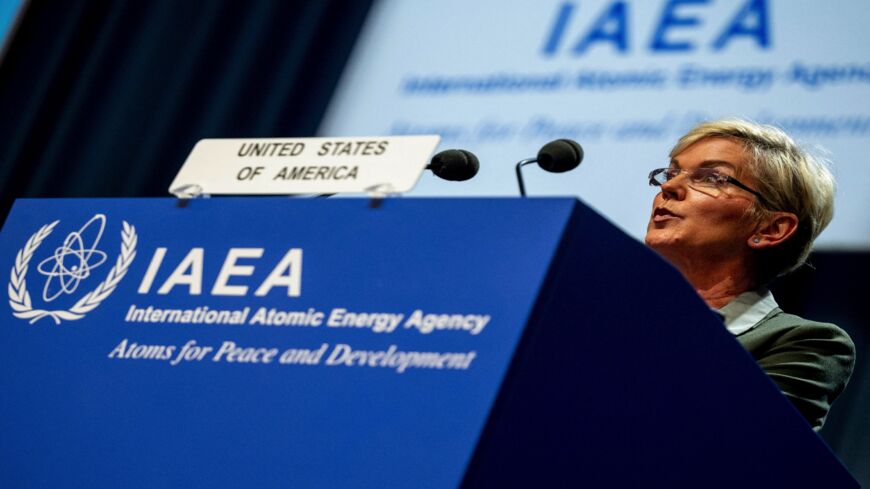 US Secretary of Energy Jennifer Granholm speaks during the International Atomic Energy Agency (IAEA) General Conference, the annual meeting of all IAEA member states, at the agency's headquarters in Vienna, Austria, on Sept. 20, 2021. - JOE KLAMAR/AFP via Getty Images

Our take: a united front

Thanks to Turkey’s currency crisis, prices for fuel and food items, including bread, have spiked sharply, making living conditions even harder for Syrians living in Idlib province, Khaled al-Khateb reports from Syria.

Idlib, in northwest Syria, is the last stronghold of Syrian opposition and jihadist forces opposed to Syrian President Bashar al-Assad.

Hayat Tahrir Al-Sham (Liberation of the Levant, or HTS), the jihadist group that governs most of Idlib, started using the Turkish lira last year.

HTS is designated as a terrorist group by both the United States and the UN Security Council.

Update: Mustafa Sonmez writes that "the consumer confidence index has plunged to its worst level since its introduction in 2004, although a meeting between Turkish President Recep Tayyip Erdogan and Abu Dhabi Crown Prince Mohammed bin Zayed Al Nahyan in Ankara on Nov. 24 boosted the currency with discussions of up to $10 billion in UAE investment in Turkey.

The Arab states that severed ties with Syrian strongman Bashar al-Assad are slowly opening the door to normalization with his regime.

Mohammad Hanafi has the details on the rare Nov. 13 meeting between the Saudi and Syrian intelligence chiefs in Cairo on the sidelines of the Arab Intelligence Forum.

The high-profile meeting came on the heels of Sheikh Abdullah bin Zayed Al Nahyan’s trip to Damascus, the first by an Emirati foreign minister since the war erupted a decade ago.

In another first, Jordanian King Abdullah took a phone call from Assad in October.

It remains to be seen whether the previously shunned Syria will be welcomed back into the Arab League, which will hold its next summit in Algeria in March.

A new Netflix series set in 1950s Istanbul is making waves in the Turkish city of Izmir’s tiny Jewish community. “The Club” tells the story around Matilda, a fictional Jewish woman who shot her Muslim Turkish lover after he wrongly accused her family of evading Turkey’s wealth tax that targeted non-Muslims.

After her release from prison, Matilda finds a job at the avant-garde Club Istanbul as a laundress.

Nazlan Ertan writes that “for many Jewish people in Turkey, the series confronts past demons,” including the Turkish government’s “Citizen, Speak Turkish!” language campaign and the multiple pogroms that devastated the country’s Jewish towns.

As its crude oil reserves dwindle, Oman is hoping logistics can re-energize and diversify its oil-dependent economy.

If the sultanate leverages its location at the center of the world’s major shipping routes, Oman’s logistics sector could employ 300,000 people by 2040, Sebastian Castelier writes.

But standing in the way of Oman’s ambitions to be the Gulf’s entry point is the United Arab Emirates, whose port operator DP World moves nearly one in 10 of the world's containers.

The economic competition between Saudi Arabia and the UAE, however, could present an opening for Oman.

Egypt and Tanzania are deepening coordination over the controversial Grand Ethiopian Renaissance Dam, which Cairo views as a threat to its Nile River water supply.

Earlier this month, Egyptian President Abdel Fattah al-Sisi and his Tanzanian counterpart, Samia Hassan, met to discuss the decade-old dispute over the megadam, which Addis Ababa has said it plans to fill.

Egypt is among Tanzania’s top economic partners and is currently building a hydropower dam in the East African country. “Egypt believes boosting its ties with Tanzania, a Nile Basin country, could thwart Ethiopian efforts to reconsider the distribution of Nile water shares,” Mohamed Saied says.

Young girls in the Gaza Strip are taking up skateboarding and, while they’re at it, shattering a stigma around women in sports.

Taghreed Ali reports on an all-girl roller skating and skateboarding team that trains every Friday morning at a graffiti-covered skate park in the impoverished Palestinian enclave.

Social norms have long prevented girls from joining the sport, and those who do want to skate often have trouble finding the proper equipment in Gaza’s stores.

Check out this video for more on Gaza's beginner boarders.

What We’re Listening To: Andrew interviews Amberin on her reporting from Syria

Amberin Zaman discusses her reporting in northeastern Syria and explains why we can't rule out the possibility of an eventual rapprochement between Erdogan and Assad over their shared fear of the Kurds. Check out the podcast here.

by Haitham EL-TABEI with AFP correspondents in the Middle East | AFP | May 17, 2022
END_OF_DOCUMENT_TOKEN_TO_BE_REPLACED