The Iranian president wants Biden to reverse Trump policies, not start a new round of talks; the US president-elect makes clear US regional partners will also have their say. 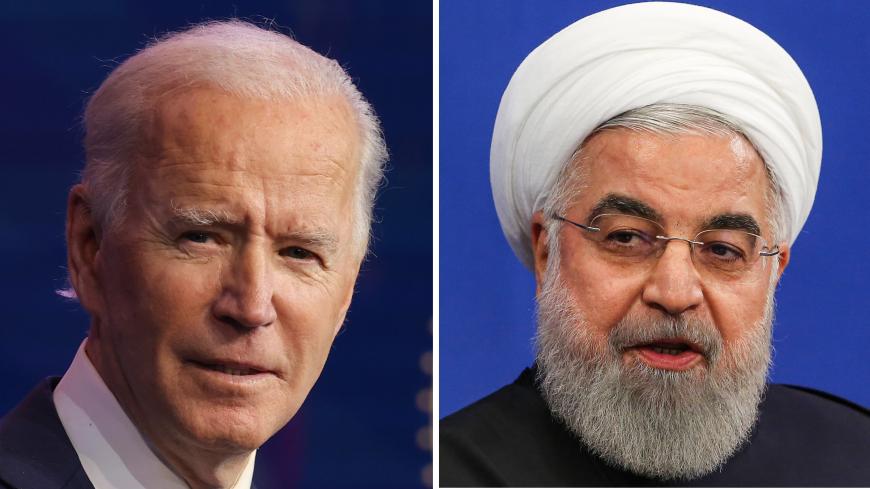 At left, US President-elect Joe Biden speaks during an event to announce new Cabinet nominations at the Queen Theatre on Dec. 11, 2020 in Wilmington, Delaware. At right, Iranian President Hassan Rouhani speaks during a news conference in the capital, Tehran, on Feb. 16, 2020. - Chip Somodevilla/Getty Images (L) ATTA KENARE/AFP via Getty Images (R)

Rouhani: Biden can just sign the "good piece of paper"

Iranian President Hassan Rouhani this week called for President-elect Joe Biden to reenter the Iranian nuclear deal by reversing sanctions imposed by the United States after the Donald Trump administration withdrew from the Joint Comprehensive Plan of Action (JCPOA), the deal’s formal name, in May 2018.

Rouhani told a Cabinet meeting Wednesday that the next president "can put a good piece of paper on the table and sign it nicely so that we could return to the first place, and it does not take time at all."

His message echoes that of his Foreign Minister Mohammad Javad Zarif, who said last month that if the incoming Biden administration revokes “only three executive orders” that imposed sanctions on Iran, there is no need for “preconditions or negotiations.”

During the US presidential campaign, Biden assailed Trump’s withdrawal from the JCPOA as a setback for US nonproliferation efforts and has called for a return to the Iran nuclear deal, if Iran is in compliance with its terms.

Iran, however, is not in compliance. In response to Trump's "maximum pressure" policies, Iran has increased its enrichment of uranium, a necessary step toward a nuclear weapon, bypassing JCPOA-imposed levels. Iran has not yet reached weapons-level stockpiles or even the pre-JCPOA levels. Iran has also expanded its use of centrifuges, in violation of the JCPOA, as we reported here last month.

Zarif has made clear these actions are all reversible. If the United States revokes the executive orders which imposed the sanctions, Zarif said, “Iran will carry out its obligations too."

Rouhani is under pressure from hard-liners in Iran’s Islamic Consultative Assembly (the official name for its parliament, or Majles) which passed a law Dec. 1 to suspend UN inspections of its nuclear facilities and further increase enriched uranium production unless the terms of the JCPOA are reinstated.

Iranian hard-liners hold the majority in the parliament after elections in February.

US Secretary of State Mike Pompeo issued a statement Friday that "the international community must not reward the regime’s dangerous gamesmanship with economic appeasement."

The legislation was sparked by the assassination of leading nuclear scientist and Islamic Revolutionary Guard Corp (IRGC) Gen. Mohsen Fakhrizadeh on Nov. 27.

Iran has blamed Israel’s intelligence services and the exiled opposition group People’s Mujahedeen of Iran (Mujahedeen-e-Khalq) for the assassination, which it claims may have occurred via satellite and possibly using facial recognition technologies.

The buzz in Tehran is that the United States may have also had a role. That would make it harder for Washington to strike a deal with Tehran, as if the issue of sanctions weren’t burden enough on Biden’s options in dealing with Iran.

Neither Israel nor the United States has taken responsibility for Fakhrizadeh’s assassination.

Iran’s Guardian Council, a constitutionally mandated oversight body with influence on legislation and government decisions, tweaked the Majles bill to offer a two-month window for the other JCPOA signatories to act before Iran would do so.

Rouhani has been protective of the sensitive diplomatic opening that may be his last chance to put Iran’s economy and foreign policy back on the track it was on before Trump took office. The Iranian president told his Cabinet on Wednesday that the conduct of diplomacy is the domain of the government, which needs to speak with a "single voice" to the world.

“With the Guardian Council amending the period to two months," writes Ali Hashem, "the most conservative body in the Islamic Republic is tweaking the message to Biden, in what could be described as an act of aggressive pragmatism that is aimed at getting a quick answer from Washington: it is either the old deal or no deal.”

The Guardian Council's timeline in a way tracks with the constraints on Rouhani and Zarif, and provides an opening, according to Hashem. "Iran as an establishment is willing to engage as far as the United States is willing to return without preconditions to the nuclear deal," he writes. “This would also have implications on the chances of a moderate candidate having chances in winning the next presidential election that is planned for June 2021. Still, any president in Tehran will have to deal with an ultra-conservative parliament that is likely to create a lot of headaches, whether or not the path of engagement is restored."

Biden told New York Times columnist Tom Friedman this month that "the United States would rejoin the agreement as a starting point for follow-on negotiations,” and lift the sanctions on Iran that Trump imposed.

While there may be arguments for using the Trump sanctions as leverage in the opening diplomatic bid, Friedman reports that the prevailing view among the Biden team is to get Iran back into full JCPOA compliance first.

Biden told Friedman that his administration, “in consultation with our allies and partners,” will then seek subsequent agreements to "tighten and lengthen Iran’s nuclear constraints, as well as address the missile program.”

US regional partners, such as Israel, Saudi Arabia and the UAE were mostly content with Trump’s maximum pressure policies on Iran and worry that they could be left behind in another new round of diplomacy with Iran.

“Israel believes Iran will accept a US proposal, if one is made, that would include a lifting of some sanctions and a full return by Iran and the United States to the nuclear agreement,” writes Ben Caspit.

Biden is making consultation a priority and will have an advantage in subsequent negotiations with Iran of working with regional partners more openly and closely than in the past, thanks to the Trump-brokered normalization agreements between Israel and the United Arab Emirates and Bahrain.

In an Al-Monitor event this week, both Alon Ushpiz, director general of Israel's Foreign Ministry, and Omar Ghobash, the UAE's assistant minister for culture and public diplomacy, reiterated their countries’ concerns about Iran. They also stressed optimism about continued strong consultations with a Biden administration on Iran and all regional and security matters, as Adam Lucente reports.

A quick return to the nuclear deal might also undercut the ability of Russian President Vladimir Putin to leverage his role as middleman in a sustained US-Iran diplomatic standoff, as Micky Aharonson said in a podcast this week. While Russia is a signatory to the JCPOA, it also enjoys the role of spoiler.

Rouhani: "A new opportunity for diplomacy"

Rouhani can’t commit to negotiations with the United States or other signatories on the terms of the JCPOA, given the political constraints in Iran. As Hashem writes, the best Rouhani can do, for now, is the old deal or no deal. But that may be an opening bid to keep the diplomatic door ajar, if the Biden administration reenters the deal in good time.

Israeli strategists believe Iran may refrain from retaliating for Fakhrizadeh’s assassination to keep open the prospect of talks. Rouhani has also backed off his previous demands for compensation and an apology from the United States for the sanctions caused by Trump, as Bijan Khajehpour explained in a recent podcast.

“We should make use of the new opportunity for diplomacy,” Rouhani said Wednesday.