In an interview with The New York Times, Biden said rejoining the landmark agreement is the best way to avoid a nuclear buildup in the region. 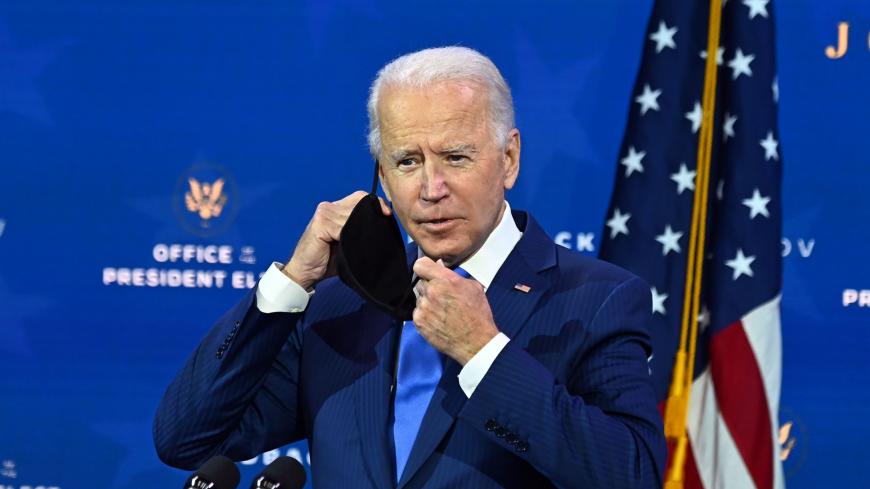 US President-elect Joe Biden removes his face mask as he announces his economic team at The Queen Theater in Wilmington, Delaware, on Dec. 1, 2020. - CHANDAN KHANNA/AFP via Getty Images

President-elect Joe Biden has reiterated his pledge to reenter the Iranian nuclear deal if Tehran returns to strict compliance, adding that he would bring in Iran’s Arab neighbors for follow-on negotiations over the country’s nuclear constraints and missile program.

“Look, there’s a lot of talk about precision missiles and all range of other things that are destabilizing the region,” Biden told New York Times columnist Thomas Friedman in an interview. “The best way to achieve getting some stability in the region” is to address Iran’s nuclear program.

Known officially as the Joint Comprehensive Plan of Action, or JCPOA, the landmark nuclear deal struck by Iran, the United States and five other world powers in 2015 required Tehran to scale back its nuclear activities in return for sanctions relief.

President Donald Trump in 2018 unilaterally withdrew from the accord in the hopes of replacing it with a tougher deal that would address Iran’s ballistic missile production and role in the regional conflicts. Since the US exit from the deal and imposition of harsh economic sanctions, Iran has steadily increased its stockpiles of low-enriched uranium in violation of the deal.

In his Times interview, Biden expressed concerns that if Iran were able to produce a nuclear bomb, the autocratic governments of Saudi Arabia, Turkey and Egypt would face pressure to acquire one for themselves.

“And the last goddamn thing we need in that part of the world is a buildup of nuclear capability,” the president-elect said.

After reentering the deal, Biden said the United States, “in consultation with our allies and partners, we’re going to engage in negotiations and follow-on agreements to tighten and lengthen Iran’s nuclear constraints, as well as address the missile program.”

According to Friedman, Biden’s team would want to hold further negotiations over the JCPOA’s original sunset clauses, as well as address Iran’s destabilizing proxy activities in the region. In addition to the deal’s original signatories, follow-on negotiations would ideally include Iran’s neighbors Saudi Arabia and the United Arab Emirates.

Iranian Foreign Minister Mohammad Javad Zarif has indicated Iran would be willing to come back into compliance if the United States first lifted sanctions, telling state-run media last month that Tehran is “ready to discuss how the United States can reenter the accord.”

But the recent assassination of Iranian scientist Mohsen Fakhrizadeh, as well as the piling on of sanctions by the Trump administration in its final weeks, will likely add to the Biden administration’s challenges.