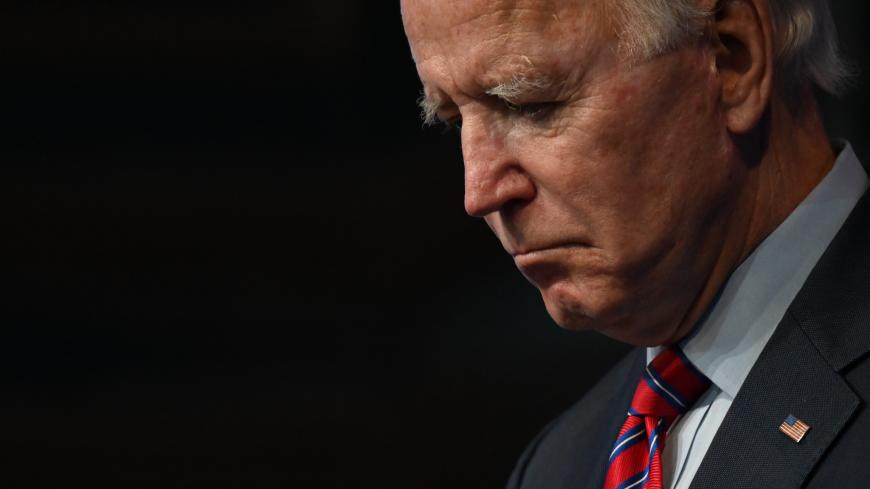 US President-elect Joe Biden reacts as he speaks on the latest unemployment figures at The Queen in Wilmington, Delaware, on Dec. 4, 2020. - JIM WATSON/AFP via Getty Images

President-elect Joe Biden, who has pledged to reenter the landmark Iranian nuclear deal if Tehran comes back into full compliance, says it’s “hard to tell” how the recent assassination of the country’s chief nuclear scientist would impact those negotiations.

Iran has vowed to retaliate for the killing of Mohsen Fakhrizadeh, whose car was fired on in broad daylight just outside of the capital Nov. 27. Iran says Israel’s Mossad intelligence agency carried out the assassination in an effort to sabotage the Islamic Republic's nuclear program, and unnamed American officials have confirmed as much.

“The bottom line is that we can’t allow Iran to get nuclear weapons,” Biden told CNN on Thursday.

Biden added that President Donald Trump, who unilaterally withdrew the United States from the nuclear deal in 2018, failed to replace it with a tougher pact.

“He has pulled out to get something tougher, and what have they done? They’ve increased the ability for them to have nuclear material. They’re moving closer to the ability to be able to have enough material for a nuclear weapon. And there’s the missile issues,” Biden said.

Known officially as the Joint Comprehensive Plan of Action, the agreement reached by Iran, the United States and five other world powers in 2015 required Tehran to scale back its nuclear activities in return for sanctions relief.

But since Washington exited the deal and reimposed harsh economic sanctions, Iran has instead steadily enriched uranium beyond what’s allowed in the deal. In a further blow to diplomacy, Iran’s hard-line parliament voted this week to increase uranium enrichment and ban UN inspectors from accessing Iran's nuclear facilities if sanctions relief is not forthcoming by early February.

Biden has vowed to rejoin the deal as a starting point for follow-on negotiations, but only if Iran first returns to strict compliance. Iran’s foreign minister, Javad Zarif, threw cold water on that idea Thursday, saying the United States was "not in a position to set conditions.”

The Trump administration, meanwhile, has continued to pile on sanctions in what’s seen as an effort to make it harder for Biden to rejoin the nuclear deal. On Thursday, the Treasury Department blacklisted an Iranian company for alleged involvement in chemical weapons research.