The Takeaway: Who goes first in return to Iran nuclear deal? 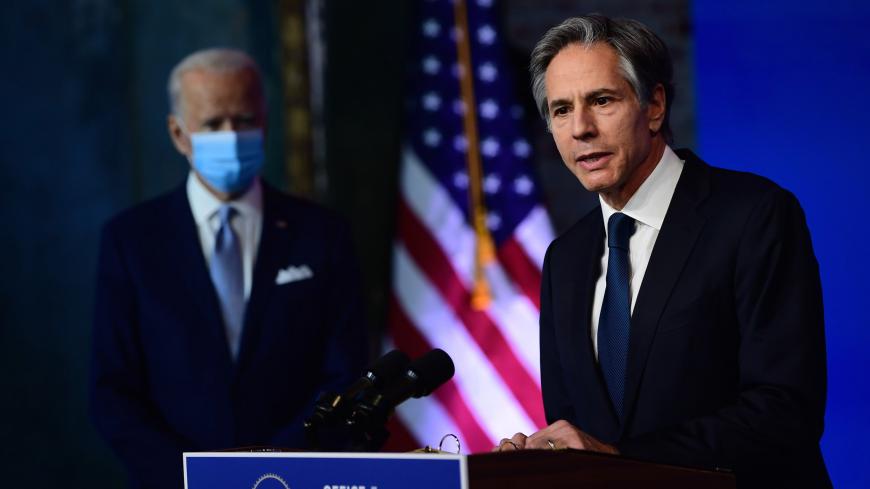 Secretary of State nominee Antony Blinken speaks after being introduced by President-elect Joe Biden as he introduces key foreign policy and national security nominees and appointments at the Queen Theatre on Nov. 24, 2020 in Wilmington, Delaware.  - Mark Makela/Getty Images

Iran: Timing is everything on return to Iran deal

Rouhani praises Biden’s ‘political experience.’ Amidst the congratulatory messages from world leaders on Joe Biden’s inauguration, Iran President Hassan Rouhani had one too.

“The new US administration understands politics and has political experience,” Rouhani said, drawing contrast with former US President Donald Trump, who “was a tower builder and did not know politics. … What happened to us in these three years was because [of] Trump's conspiracies.”

Iran ‘ready’ to deal ... More tellingly, Rouhani made clear, again, that Iran wants back into the Joint Comprehensive Plan of Action (JCPOA), or Iran nuclear deal, if the United States agrees to rejoin as well. US sanctions on Iran’s oil imports and financial transactions, imposed after the Trump administration withdrew from the deal in 2018, have taken a terrible toll on Iran’s economy, which is experiencing a third straight year of negative economic growth.

“Today, we are ready,” Rouhani said. “If the other side acts honestly and returns to the law and obligations, the problems will be solved very quickly and there would be no legal complexities.”

Those “problems,” from the US perspective, include Iran processing highly enriched uranium at levels close to the weapons development threshold, above the JCPOA limits, as well as making uranium metal, also essential for a nuclear weapon.

Zarif: no need to talk about it. Iran’s leaders have conveyed that its steps are the result of US actions and can be reversed if Biden re-commits the United States to compliance. Iran Foreign Minister Mohmmad Javad Zarif said that a “return-for-return” deal could be done quickly through executive orders and without need for negotiations, as we report here.

Khamenei has Rouhani’s back (kind of). Iran Supreme Leader Ayatollah Ali Khamenei, not surprisingly, has taken a complementary if rhetorically harder line. “This is not the issue for us whether the US returns to the JCPOA or not. If the sanctions are not lifted, then the US’ return to the JCPOA might even be to our disadvantage,” he said on Jan. 8.

He added, however, “Of course, if they (the US) return to their (JCPOA) commitments, we will return to ours as well.”

Blinken: ‘long way’ from new deal. Biden’s nominee for secretary of state, Antony Blinken, said at his nomination hearing yesterday before the Senate Foreign Relations Committee that the Biden administration would consider reentering the JCPOA as a starting point for follow-on negotiations to “tighten and lengthen Iran’s nuclear constraints” and address Iran's missile program. Iran rejects talks of missiles or anything else as a condition for a return to the JCPOA, preferring the straight-up “return-for-return” approach. Blinken also stressed the need for consultation with Gulf partners and Israel. He added that “we are a long way from there,” as the US first has to ensure that Iran returns to compliance with the JCPOA, as Elizabeth Hagedorn reports.

Israel worries about ‘harsh strategic blow.’ Ben Caspit reports on the anxiety in Jerusalem, perhaps shared in some Arab Gulf capitals, about a return to the JCPOA without additional constraints on Iran’s missile program and regional behavior.

“Israeli officials believe the Biden administration will weigh two options,” writes Caspit. “A moderate one in which the Iranians commit to reverting to the original agreement and giving up the assets they acquired since the United States pulled out of the deal, in return for a significant lifting of sanctions. Jerusalem would regard such a scenario as a harsh strategic blow. [Israeli Prime Minister Benjamin] Netanyahu is hoping Biden opts for a second, tougher approach — lifting sanctions slowly, gradually and cautiously in exchange for Iran's return to an amended agreement that includes an extended deadline of 25 years rather than 15 and plugging the loopholes on its ballistic missile project and regional conduct.”

Our take. Biden can’t return to the Iran nuclear deal until Iran is in compliance, and Iran won’t return to the deal unless the United States is in compliance, meaning lifting Trump era sanctions  — an initial standoff that would require some creative choreography. Mark Fitzpatrick makes the case that “Biden’s best path forward is to proceed quickly with his stated intention to restore America’s commitment to the JCPOA as long as Iran does so as well” and put off all other discussions for the next round. There nonetheless might need to be an interim step that allows Iran to reengage international financial markets and resume some oil exports, as Iran returns to compliance, some expanded version of what French President Emmanuel Macron proposed in 2019. Maybe, if the straight-up deal proves difficult. Rouhani may need a quick turnaround; hard liners control Iran’s parliament, Iran’s presidential elections are in June and he can’t run for reelection.

If you are looking for background and context on Biden’s national security/Middle East team, check out these interviews with senior members of the incoming administration:

-William Burns has been nominated to be director of the Central Intelligence Agency. At an Al-Monitor event in September 2019, the former deputy secretary of state said that the Trump administration’s withdrawal from the JCPOA was a “foolish mistake,” adding that “you want to use the leverage we have now to make a much more serious push on Yemen and create some time and space to deal with the Iranians to lowering tensions in the Gulf.” Jack Detsch has the report here, and you can watch the event here.

-Philip Gordon is deputy national security adviser to Vice President Kamala Harris. On Nov. 24, he and I discussed trends in US policies toward Iran, Turkey, Syria and Iraq; the benefits and limits of Israel’s normalization agreements with the UAE, Bahrain and Sudan; the challenges the Biden administration will face in the Middle East; and his book “Losing the Long Game: The False Promise of Regime Change in the Middle East.” Gordon said that while Turkey may no longer be a “model partner,” it is very much in the US interest to find common ground whenever possible. You can check out the podcast here.

Activists call out Egypt for ‘systemic campaign’ against dogs and cats … A lawsuit has been filed on behalf of animal welfare activists who are asking that the government cease randomly killing stray dogs and cats and ban exports to countries that eat them. The lawyer filing the case told Al-Monitor that his case calls out the government for a “systematic campaign” that uses “brutal” methods to kill the animals, including shooting them or inserting “deadly toxins” into their food and feeding it to them. According to these activists, the campaign disrupts the ecological balance, because dogs and cats eat snakes and rodents. You can read the report from a correspondent in Egypt here.

… and a TV station for brutal video of fox hunt. Last month, activists and the Egyptian Ministry of the Environment slammed a television station for airing an illegal fox hunt where the fox was hung and tortured. David Awad has the story here.