Biden administration's textbook approach to Iran may be paying off 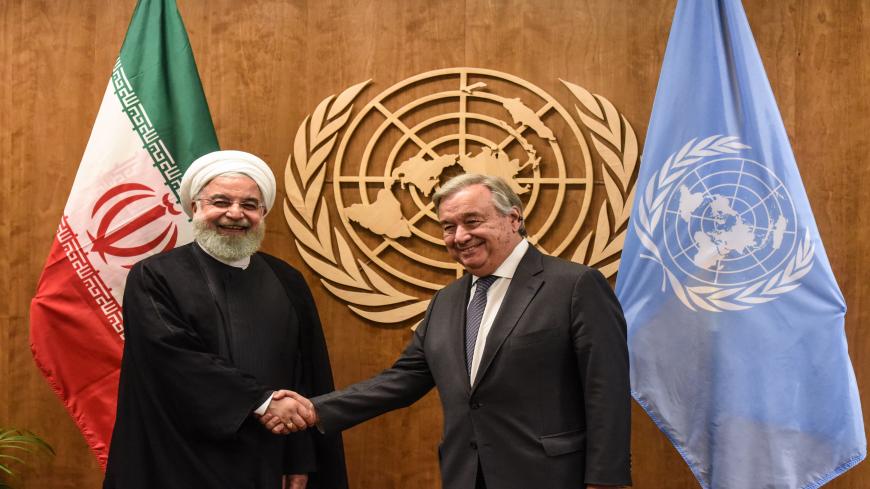 Blinken: ‘Path of Diplomacy is open’

US Secretary of State Antony Blinken said this week that the decision is Tehran’s whether to reengage on the Iran nuclear deal.

“The path of diplomacy is open,” he told Judy Woodruff March 3.

The European Union invited all of the parties to the Joint Comprehensive Plan of Action (JCPOA), or Iran nuclear deal — the United States, United Kingdom, France, Germany, Iran, Russia and China — to resume talks.

The United States said yes. Iran said no this time, but it may be reconsidering (see below).

“We’ve been very clear that Iran has to come back into compliance with its obligations under the nuclear agreement, and if it does, we’ll do the same thing,” Blinken continued. “And … that would involve, if they do it, some sanctions relief.”

In other words, the United States is ready, in the context of the JCPOA group, to discuss “compliance for compliance” — sanctions relief for Iran, once Iran returns to uranium enrichment levels and other protocols as agreed in the JCPOA.

US President Joe Biden’s approach to Iran has been consistent and straightforward, and so far by the diplomatic book. And it's paying off.

The first US priority has been to rebuild trust and consensus with its EU partners. The Trump administration, in breaking from the JCPOA, had gone it alone on Iran, alienating European allies.

A more hawkish take has been that the Biden team, many of whom are Iran deal veterans, may be too quick to cut a deal with Iran, to the detriment of US interests.

Neither criticism hits the mark.

True, those in this administration who were involved in the 2015 Iran deal consider it a signal achievement and stand by it as foundational in addressing Iran’s nuclear weapons potential.

While that view holds, among the new/old officials who will be dealing again with Iran, there is also an awareness of the many changes over the past six years.

Wendy Sherman, Biden's nominee to be deputy secretary of state, who as undersecretary of state for political affairs was the lead US negotiator on the nuclear deal, said at her nomination hearing before the Senate Foreign Relations Committee on March 3 that “2021 is not 2015, when the deal was agreed, nor 2016, when it was implemented. The facts on the ground have changed, the geopolitics of the region have changed, and the way forward must similarly change.”

Colin Kahl, Biden’s nominee for undersecretary of defense for political affairs, similarly said during his nomination hearing before the Senate Armed Services Committee on March 4, "I think dynamics in the Middle East have changed. I support the Abraham Accords and I wouldn’t move the embassy … away from Jerusalem,” adding that he backs Israel’s airstrikes against Iranian and Iranian-backed forces in Syria, as Jared Szuba reports.

The US-brokered normalization agreements (Abraham Accords) between Israel and the United Arab Emirates, Bahrain, Morocco and Sudan — in the context of more open Israel-Gulf alignment over a shared concern of Iranian intentions — further strengthen the administration’s diplomatic hand.

Anticipating these changes, Biden said during his presidential campaign that he will consult US regional partners this time on diplomacy with Iran. Hard-liners in Israel had been concerned that Biden would rush back into the Iran deal. At least so far, those concerns seem overblown. The US-Israel relationship under Biden is rock solid. Israeli Prime Minister Benjamin Netanyahu has so far steered a more pragmatic approach in dealing with both the United States and Iran, including in his measured response to an attack on an Israeli tanker in the Gulf of Oman, which Israel has blamed on Iran, as Ben Caspit reports.

Deterrence also part of the plan

The Biden administration itself has also not shied away from confronting Iran with force, and will likely continue to do so if nuclear diplomacy stalls, and probably even as it resumes.

Iran doesn’t take a holiday from its policies in Iraq, Syria, Lebanon and the Gulf. The Islamic Republic is likely to continue to challenge and probe the resolve of the United States and its partners. And the United States will respond.

This week, US warplanes struck Iran-backed targets in Syria on the Iraq-Syria border, in retaliation for rocket attacks presumed to have been carried out by Iran-backed militias on al-Asad air base and Erbil International Airport in Iraq, as Szuba reports here.

The attacks in Syria were criticized by some members of Congress and by Donald Trump Jr., the son of former US President Donald Trump, as Adam Lucente reports.

Despite a recalibration of US policy toward Saudi Arabia, including sanctions against Saudis implicated in the killing of journalist Jamal Khashoggi, as Elizabeth Hagedorn reports, the United States remains committed to the US-Saudi military-military relationship in dealing with the threat from Iran and the Ansar Allah (Houthi) forces in Yemen.

The Biden administration has made ending the war in Yemen a top priority.

In a potential opening for renewed nuclear diplomacy, Mohsen Rezai, head of Iran’s Expediency Council and former head of the Islamic Revolutionary Guards Corps, said Iran may be willing to reengage on talks if the US sends a "clear signal" that US sanctions "would be lifted in less than one year."

In an interview with the Financial Times, Rezai added that "we have to see every month during the talks that some sanctions which are of urgency to us are being lifted…for instance, sanctions on financial transactions and restrictions that European banks have imposed should be lifted in the first month. Oil exports are also among our top priorities.”

Rezai’s message is a diplomatic flare and gives some cover for Iranian President Hassan Rouhani, who told the Economic Cooperation Organization that "Iran will reciprocate action by action…the return path to the JCPOA is straightforward, and if the US government is determined to return, there is no need for negotiations," in addition to noting that "nothing will be added or removed from the JCPOA; it is a fixed text and we will not have a new negotiation within the framework of the JCPOA."

Rezai’s statement could give Rouhani space to broker an interim deal as a kind of bridge to keep diplomacy going during the election season and when a new government takes over after the June elections.

Rouhani can’t run for a second term, and his political legacy is complicated. The Iran nuclear deal was considered a success for him and for Iran, until the Trump administration withdrew in May 2018 and imposed sanctions that have devastated Iran’s economy at a time of falling oil prices and subsequently the coronavirus pandemic.

The economic problems, compounded by systemic corruption, have been blamed on Rouhani, and have been used by hard-liners to undermine Rouhani and his Reformist coalition and retake Iran's Islamic Consultative Assembly, or Majles, as the parliament there is known. Parliamentary elections last year were a disaster for Rouhani and Reformists. Hard-liners — or Principlists — now control 220 of the 290 seats; Reformists hold only 22 seats.

Sabaz Nazari explains that the Rouhani-Reformist coalition was never a perfect fit.

“Widely believed to be a pragmatic, moderate figure, Rouhani has never called himself a member of the Reformist camp,” Nazari writes. “And despite the unequivocal support he received from Reformists, the Iranian president appears to have all but disappointed them by his refusal to grant them top ministerial positions.”

“The challenges faced by the Reformists are many, from diminishing popularity to the suppression at the hands of powerful hard-liners,” Nazari adds. “Amid all that, the Reform movement has yet to come up with a name that could truly represent it and hold a chance to push aside the powerful hard-liners.”

Rezai's diplomatic flare, and Zarif’s intention to shortly submit a "plan of action," signals there still may be room for some creative choreography or interim steps for nuclear diplomacy with Rouhani, as we described here in January. The fate of the JCPOA, and the potential for more expansive negotiations with Iran, will ultimately depend, however, on who replaces Rouhani. The United States can’t dictate or foresee the outcome of those elections. By reinforcing the US-EU alignment on Iran, and engaging US regional partners, the US diplomatic hand is only getting stronger.