The Rouhani administration has pinned its hopes on Europe to save the nuclear deal, and the stakes couldn't be higher. 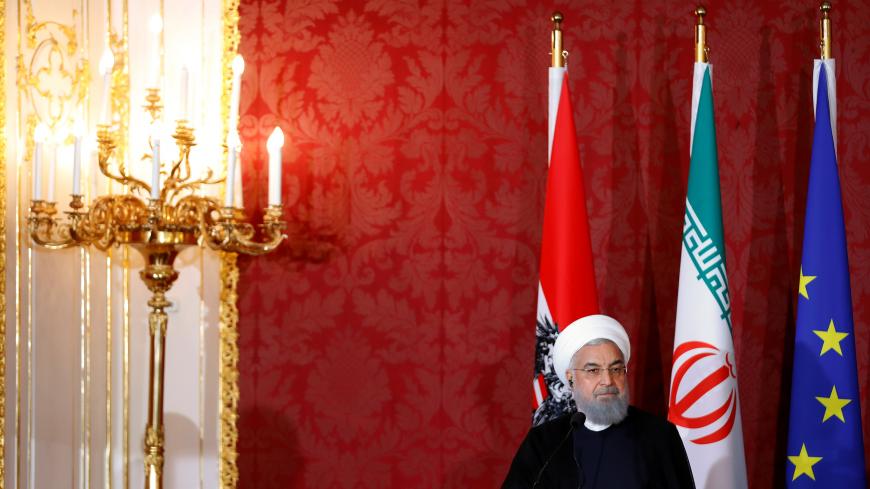 President Hassan Rouhani announced earlier this month that Iran would suspend implementation of some of its commitments under the Joint Comprehensive Plan of Action (JCPOA), one year after the US withdrawal from the nuclear deal. Rouhani also signaled that unless the remaining JCPOA signatories stepped up to fulfill the promised economic dividends of the accord, then there would be subsequent phases of Iranian action ahead.

Meanwhile, a number of analysts and US politicians have argued that Iran is not serious about its claims. US Sen. Marco Rubio tweeted May 7, “Iran threat to leave JCPOA is a bluff. It’s part of a campaign to pressure Europe into helping them evade US sanctions.”

Yet Al-Monitor has learned that while the Iranian state’s initial decision was to leave the nuclear deal, Rouhani convinced the establishment to adopt a more gradual approach.

Rouhani’s plan may be to pressure Europe to find a solution to save the JCPOA, but he is quickly losing control of the situation. He may no longer have the clout to stand against pressure at home. Indeed, he no longer has the leverage to talk to the establishment about preserving “strategic patience,” which Iranian hard-liners have mocked as “the wait-for-Biden plan.”

Iran’s conservatives are empowered due to the public’s growing dissatisfaction with the Rouhani administration and the country's dire economic conditions, which mostly stem from US sanctions. Conservatives have repeatedly called on the president to leave the JCPOA in the past few months, rejecting the arguments made by figures close to Rouhani, that the US aim is to persuade Iran to kill the JCPOA. For instance, Mahdi Mohammadi, a hard-line analyst close to the centers of power, tweeted April 22, “The most wrong [argument] is that we think the US wants to push Iran to leave the JCPOA. America and Israel currently have a concern, and that is Iran exiting the JCPOA in practice.”

Farheekhtegan daily has echoed the conservative plan for the future of the JCPOA: a road map that the government would likely be forced to implement. The possible next steps, as outlined by Farheekhtegan, are enriching uranium beyond the permitted 3.67% concentration of U-235 permitted under the accord; operating thousands more centrifuges; resuming 20% enrichment; installing more advanced IR-8 centrifuges; designing and producing nuclear propulsion systems requiring high-enriched fuel; and leaving the Additional Protocol as well as the Nuclear Non-Proliferation Treaty.

Meanwhile, Europe reacted harshly to Iran's announcement. In a May 8 interview with Reuters, sources at the French presidency threatened to reimpose international sanctions on Iran if it reneges on its commitments under the nuclear deal.

The European Union and the foreign ministers of Germany, France and the UK issued a statement May 9: “We reject any ultimatums and we will assess Iran's compliance on the basis of Iran's performance regarding its nuclear-related commitments under the JCPOA." In response, Foreign Minister Mohammad Javad Zarif tweeted on the same day: "EU statement today is why JCPOA is where it is: the US has bullied Europe — and rest of world — for a year and EU can only express 'regret.'"

However, on May 13, EU foreign policy chief Federica Mogherini, in an act designed to reassure Iran, said that the EU goal is to get the special purpose vehicle, INSTEX — designed to uphold legitimate trade with Iran — up and running in the next few weeks. Iran's central bank governor described this as nothing new.

A European diplomat, who spoke on condition of anonymity, told Al-Monitor, “INSTEX at the beginning will be very limited. I think, however, that later on this could change, but it will require a strong political will.” The diplomat added, “I don’t know if Paris and Berlin are ready to openly challenge Trump and his friends.”

While the Iranian government’s revenues have slumped due to US oil sanctions, a limited INSTEX, which likely won’t cover oil sales, won’t satisfy Tehran.

Meanwhile, some opine that Tehran’s disappointment with Europe’s performance may convince it not to include European governments in future talks. Indeed, the JCPOA was initially the result of secret bilateral talks between Iranian and US officials in Oman.

“The JCPOA’s content was actually agreed first with the US, behind the scenes," the diplomat said. "Europe came at the end only after everything was solved between Iran and the US. So, yes, this is something in which France, Germany and the UK cannot do very much."

He added, “The key to solve the problems is a bilateral dialogue with Washington, and it is sad for me to say this, but according to what I see every day there is no alternative.”

Fereydoun Majlesi, a veteran Iranian diplomat, told Al-Monitor, “It is better for Iran to have a direct dialogue with the US instead of Europe. I think Tehran has reached this conclusion, but a small and powerful group of hard-liners are still resisting this.”

“Negotiations sometimes occur in the peak of crisis," said Qassem Mohebali, a former director of the Middle East desk at Iran’s Foreign Ministry. "I mean, both sides heighten the tensions and crisis to finally reach the negotiation table."

In the meantime, President Donald Trump apparently retreated from the 12 demands for Iran outlined by US Secretary of State Mike Pompeo. “What I would like to see with Iran, I’d like to see them call me,” Trump said. Iran’s Deputy Foreign Minister Abbas Araghchi replied that “if needed, they’ve got our number.”

Iran has repeatedly stated that it hasn’t left the negotiation table and that it is willing to talk on the basis of mutual respect. Therefore Tehran wouldn't, at this time, grab the phone and call Trump. “Mr. Trump! Don’t wait for Iran’s phone call," said Alireza Rahimi, a Reformist member of parliament. "You should call the four-digit number of President Rouhani to become aware of the realities.”

In addition to the Reformists, a number of hard-liners have also spoken of talks with the United States. Yet they argue that their own team, not members of the Rouhani administration, should show up to the table. However, Iranian officials are confused by the White House's mixed messages, an argument also affirmed by Araghchi.

“I believe that Iran can set conditions for negotiations [with the US]," said Heshmatollah Falahatpisheh, chairman of Iran's foreign policy and national security commission. "We are a great country, and great countries make big decisions.”

While the Iranian political establishment is not eager to negotiate with Trump, possible first conditions for such negotiations could be the lifting of oil sanctions and the removal of the Islamic Revolutionary Guard Corps from the US list of "foreign terrorist organizations." As for what's next, one can only wait and see whether Europe will fulfill Tehran’s demands in the coming weeks, and whether Rouhani can withstand the pressure to leave the JCPOA.