Rouhani out of time, support for revised nuclear deal

US sanctions and Europe's failure to come up with a satisfactory substitute for the nuclear deal are weakening the moderates in Iran's government while inflaming the hawks. 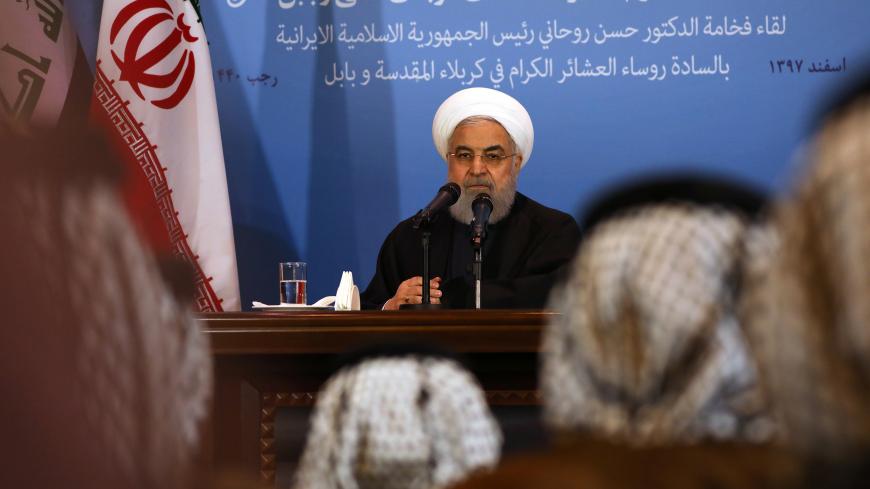 While tensions between Iran and the United States have escalated, Europeans have implemented a special purpose vehicle — a payment channel set up to facilitate trade with Iran and avoid US sanctions. Yet the special purpose vehicle, known as the Instrument in Support of Trade Exchanges, or Instex, hasn't satisfied Tehran. Iranian officials have compared Instex to “a car without gas.”

A year ago, the moderate government of President Hassan Rouhani probably would have gone along with the current version of Instex and given it more time to prove itself. That doesn't seem to be the case now. Instead, Tehran has become intransigent, enriching uranium beyond the nuclear deal cap of 3.67%, on its way to 4.5%.

On June 28, Iranian Deputy Foreign Minister Abbas Araghchi met in Vienna with representatives of Germany, the UK, France, Russia and China to discuss the nuclear deal — the Joint Comprehensive Plan of Action (JCPOA). Concurrently, the news about Instex going operational was announced. Araghchi welcomed it, but called it “inadequate.” A few days later, on July 3, Rouhani — known as the "diplomat sheikh” for his role as Iran's chief negotiator in nuclear talks in 2003-05 — described Instex as “empty” and “worth nothing.” His decision on Europe’s initiative was clear: “No.”

Rouhani’s reaction may have been unexpected by Westerners. They were witnessing a different Rouhani, who spoke harshly against Europe and threatened unlimited uranium enrichment. In fact, instead of appearing as usual, talking softly and diplomatically, Rouhani chose to showcase a different side of his personality. But why?

It has been more than a year since US President Donald Trump exited the 2015 nuclear deal, and since then, Europe has asked Iran to remain in the JCPOA, promising to make up for the US absence. But nothing concrete has transpired so far.

After the news about Instex was announced, Reformists cautiously welcomed it, but argued that it doesn't realize Iran’s demands.

Tehran hard-liners immediately began mocking it, calling it the second coming of "the catastrophe of JCPOA,” “a second dead end,” “the project of curbing Iran” and “a commode."

Parliament member Seyyed Mohammad-Hossein Mir-Mohammadi told the Tasnim news agency July 1, “Officials should be careful not to let Europeans keep us busy with dialogue and negotiations, and [stop us] with minor concessions, and distance us from our goals.”

Some Iranians had predicted the Instex news would lead to appreciation of Iran's rial currency. It didn't. Some think Europe's constant delays have cost Instex any positive effect it might have had on Iran’s foreign exchange market. And Iranians apparently aren't the only ones disappointed with Instex. A European diplomat told Al-Monitor, “Even China doesn't believe Instex is useful. They're going to establish their own system.”

The moderate Rouhani, who came to power with the promise of restoring ties with the West and resolving the nuclear issue, is now at war on two fronts. Outside Iran, he is struggling with Trump, who not only withdrew from the JCPOA but is also preventing European and Eastern countries from trading with Tehran. Domestically, Rouhani is losing a six-year battle to hard-liners and has been seriously weakened by the dire economic situation, which is rooted in the US undermining of the JCPOA. According to some reports, Rouhani’s popularity has fallen below 10%, which is unprecedented.

The recent US sanctions directly against Iran’s Supreme Leader Ayatollah Ali Khamenei haven't hurt him, but have put a huge obstacle in the way of any negotiations, giving the hard-liners significant grounds for action while tying Rouhani’s hands tighter.

In reality, the US sanctions and, partly, Europe’s inability to save the JCPOA are gradually radicalizing Iran and its society. Moderates in Tehran risk being accused of betraying their country. They are being undermined and isolated, and their positions are being taken away one by one. For instance, Heshmatollah Falhatpishe, a prominent moderate and pragmatist parliament member, recently tweeted that Iran should give Instex more time. But he's no longer taken seriously, having just last month lost his position as chairman of parliament's foreign policy commission to a staunch JCPOA enemy.

Rouhani is in such a difficult place right now that it would be hard for him to sell even his preferred version of Instex, which would allow oil sales. This isn't 2015, when Rouhani enjoyed vast public support and was able to force the establishment and hard-liners to cave in. Now, he doesn't have ordinary Iranians standing behind him to pave his way to a compromise with Europe. If he had that support, he could at least give Europe and Instex one more shot. What shouldn't be overlooked here is that the hard-liners aren't idle, and will do their best to keep Rouhani from being flexible. They are fully aware that such an agreement would destroy their dream of taking over parliament and the presidential palace.

The new Rouhani is the joint product of the US withdrawal from the JCPOA and Europe’s delays and inability to get the nascent Instex up to full speed. The “diplomat sheikh” is gone, at least for now — unless a miracle happens such as European purchases of Iranian oil or the US return to the JCPOA.