Iranians may turn to ‘military president’ as nuclear deal collapses

The collapse of the JCPOA could fan political winds in Iran, leading to the rise of a military president. 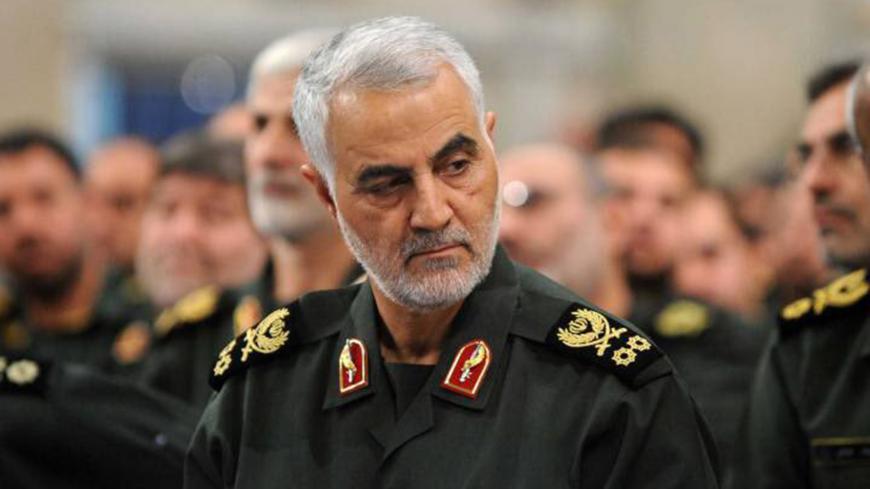 Ever since Donald Trump’s victory in the 2016 US presidential election, Iranian hard-liners have been jubilant about his pledges to kill the nuclear deal — the signature achievement of moderate President Hassan Rouhani. Now, Trump has finally handed a precious gift to his foes in Tehran. On May 8, after months of threats, Trump announced a US withdrawal from the Joint Comprehensive Plan of Action (JCPOA). He had warned his European allies that if they don’t “fix” the deal, he would “nix” it.

In 2013, Iranians were fed up with the two-term presidency of hard-liner Mahmoud Ahmadinejad, under whom the nuclear file had turned into a crisis. Amid these conditions, the late Akbar Hashemi Rafsanjani’s nomination in the presidential election that year was welcomed by many, as he was known to both friends and foes as someone who could improve the bitter relationship between Iran and the West. As Rafsanjani was barred from running by the Guardian Council, he quickly threw his weight behind his protege, Rouhani, who pledged to voters that he would solve the nuclear crisis. Throughout the negotiations between Iran and the P5+1 (the United States, UK, France, Russia, China and Germany), Republicans in the US Congress and hard-liners in the Iranian parliament almost constantly sought to torpedo the talks.

After the signing of the deal, ordinary Iranians were waiting to see the economic dividends that officials told them would improve their lives. Things were gradually getting better in the months after the JCPOA was implemented in January 2016. But then Trump entered politics. Even as he vowed to kill the deal, most Iranians were still hopeful, re-electing the “Diplomat Sheikh” — a common moniker for Rouhani — in May 2017 and opting for constructive engagement with the world to deflect US pressures.

In the aftermath of the US withdrawal and amid continued uncertainty about the future of the nuclear deal, the experience of the JCPOA is already having potentially profound consequences for Iranian politics.

First and foremost, the hard-line thoughts and circles under the leadership of Ayatollah Mohammad Taqi Mesbah Yazdi — a one-time mentor of Ahmadinejad — are being revived, with many likely to soon consider Iran's opening and interaction with the West as failing to bring prosperity for Iran. These forces had been seriously damaged by successive electoral defeats since 2013.

As a result of the resurgence of hard-line approaches, conditions for those favoring engagement with the West will become increasingly difficult. Indeed, it will probably lead to even the moderate administration of Rouhani adopting a harsher stance in order to alleviate rising pressures from hard-liners. Perhaps more importantly, Rouhani and his team have neither the motivation nor the authority to show “heroic flexibility” — the term used to sell engagement with the United States during the nuclear talks — while engaging in the coming weeks with European countries to assess whether to remain in the JCPOA. In this context, it should further be noted that the full collapse of the JCPOA is likely to make Iranians lose hope in Reformism and even moderation. While this may be welcomed by some in Washington, hard-liners in Tehran also relish political apathy given that high voter turnout tends to favor their foes.

Under these conditions, there is the prospect of a longtime dream of Iranian hard-liners being fulfilled — namely, the rise of a military president. With Trump’s repeated threats, hard-liners have started bringing up this notion to test reactions in Iranian society. In this vein, hard-line parliament member Mohammad-Ali Pour-Mokhtar notably said March 18, “A number of media say that military men shouldn’t become presidents. I believe that if a military president becomes elected, he can surely solve people’s problems.”

With Quds Force commander Maj. Gen. Qasem Soleimani’s inroads across the region, some could be persuaded that a military strategist would be better suited to lead Iran. According to a survey conducted by the University of Maryland last summer, 61% of Iranians have a favorable view of Soleimani. Popular Foreign Minister Mohammad Javad Zarif, who headed the nuclear negotiations, came in second, getting “favorable” views from 43% of respondents.

While it is not likely that Soleimani will enter the next Iranian presidential election, his highly publicized battlefield victories have prepared public opinion for a military president. This should be seen in the context of a climate in which Iranian voters have in past decades generally reacted negatively to uniformed candidates. Current secretary of Iran’s Supreme National Security Council, Rear Adm. Ali Shamkhani, former IRGC commander Mohsen Rezaie, and former national police chief Mohammad Bagher Ghalibaf are among former security personnel who have failed to win any of the past five presidential elections in Iran.

Amid all of this, Iranian politics could be on the precipice of a shift, given that many no longer identify along old partisan lines. One recent poll claimed that more than 74% of Iranians don’t consider themselves Reformist or conservative. One reading of this is that people simply want an effective leader who can overcome the country’s problems. In this vein, there is the danger that voters may conclude that the constructive engagement favored by a diplomat president such as Rouhani has reached a dead end. Spurred on by Soleimani’s battlefield victories, they may rather want to see a strong and decisive leader in the face of an escalation of outside threats and hostilities.

While Iranians are fully aware that Rouhani is not responsible for the collapse of the JCPOA, there is a strong argument that his approach has failed, and that it is thus time for a harsher and sterner strategy. In such a scenario, even pragmatic conservatives such as parliamentary speaker Ali Larijani have no chance of being elected, let alone a Reformist such as incumbent First Vice President Eshaq Jahangiri.

Given these potentially profound consequences of the collapse of the JCPOA, it is becoming apparent that the only side able to uphold the accord — namely Europe — can play a unique role in helping shape political winds in Iran. If Britain, France and Germany stand firmly behind the nuclear deal and uphold their commitments rather than continue seeking to appease Trump by bringing up extraneous issues, an Iranian government in the hands of the pro-Reform camp may eventually come to enter further engagement.