Iranian conservatives may be forced to embrace Rouhani

Iranian conservatives may have no choice but to find a way to engage with incumbent President Hassan Rouhani with the country only a year away from its next presidential election. 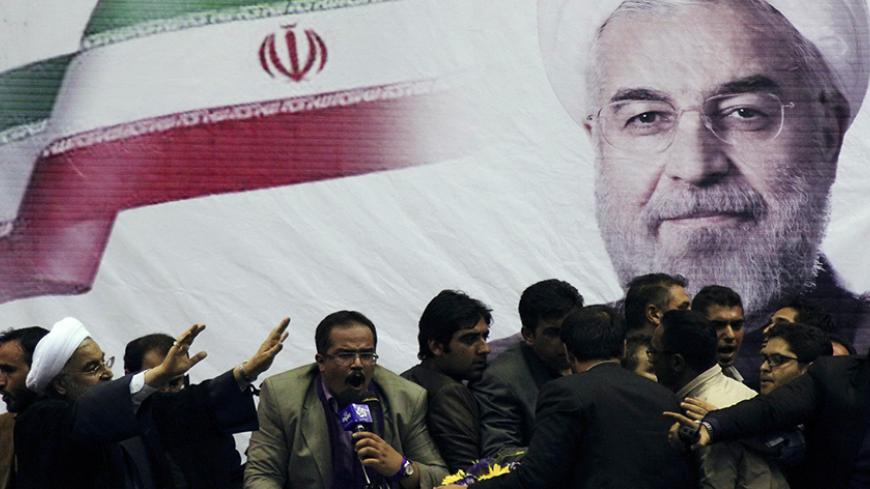 TEHRAN, Iran — With the country only a year away from its next presidential vote, Iranian political factions are combing their ranks for the strongest possible candidates.

In the previous presidential election, in 2013, the Reformists had only one candidate: Mohammad Reza Aref. At that time, successful candidate Hassan Rouhani was also described by some news outlets and analysts as Reformist to repeated criticism from Aref, who reiterated, “I don’t describe Rouhani as Reformist.” He was right. Rouhani’s base has always been different from that of Aref’s.

Rouhani is a prominent member of the conservative Combatant Clergy Association, which was founded two years before the 1979 Islamic Revolution. Today, the association is a highly influential group within the conservative camp and plays a decisive role in the shaping of coalitions with other conservative factions ahead of every election.

Throughout the past decades, Rouhani has been a protege of Ayatollah Ali Akbar Hashemi Rafsanjani, a pragmatic conservative who is now seen as a moderate pillar of the Islamic Revolution. Indeed, Rafsanjani’s political trajectory can be greatly helpful in understanding Rouhani’s thinking. The incumbent Iranian president is a progressive-minded politician who has held sensitive positions throughout his career over the past 37 years.

Following Mohammad Khatami’s victory in the 1997 presidential election, public sentiments were strongly in favor of politicians presented as leftist or Reformist. As such, in the 2000 parliamentary vote, Rafsanjani barely got elected, and later withdrew, while Rouhani lost his five-term seat. At that time, Rouhani was seen as a conservative in an election that resulted in a landslide victory for Reformists, much like this year's parliamentary race, in which even moderates on Principlist tickets were all defeated.

Of note, neither Rafsanjani nor Rouhani had a good relationship with the radical left back then. In fact, a large number of radical leftist figures harshly criticized Rafsanjani and his associates. In particular, radical leftist journalist Akbar Ganji published a controversial book in which he heaped scorn on Rafsanjani. These attacks played a role in Rafsanjani’s defeat by hard-liner Mahmoud Ahmadinejad in the 2005 presidential election. Despite all this, Rafsanjani enjoyed good ties with moderate Reformists and Khatami.

Reformists have repeatedly expressed regret about having acted against Rafsanjani in the past. Reformist magazine Andisheh Pouya opined in an editorial, “What the Reformists did against Rafsanjani wasn’t a decision based on prudence, and it was more like taking revenge. … Maybe, if they hadn’t used their social capital on confronting him, he wouldn’t have lost the 2005 presidential election.”

How Rouhani is different from other conservatives

The conservative camp is divided between moderates and hard-liners. Hard-liners do not believe there is any way to engage with Reformists, who are seen as anti-revolutionary. In contrast, traditional conservatives — known as moderates — such as Rafsanjani and Rouhani do not rule anyone out and believe it is possible to work with every political faction in the country. Take, for example, Rouhani’s constructive cooperation on the nuclear file with Khatami, the Reformist president from 1997 to 2005, as chief nuclear negotiator in the capacity of secretary of the Supreme National Security Council.

Meanwhile, moderate leaders such as Rafsanjani and Nategh-Nuri sought to enhance the moderate camp and continued their activities on their own.

In the 2013 presidential election, Rouhani ran under the banner of moderation. The conservative camp had three main candidates: pragmatist Ali Akbar Velayati, conservative Mohammad Bagher Ghalibaf and hard-liner Gholam Ali Haddad-Adel. The three had reached an agreement among themselves to withdraw in favor of the one who could attract the highest number of votes. However, neither of them ended up keeping the pledge. The conservative vote was further split as former chief nuclear negotiator Saeed Jalili ran separately as the candidate of hard-liners close to Ayatollah Mohammad-Taghi Mesbah Yazdi, the spiritual leader of the hard-line Endurance Front.

Meanwhile, Reformist figures asked Aref to withdraw in favor of Rouhani as they thought this was the only chance to keep Reformism alive. Rouhani had good relationships with all sides — including the conservatives — and had far better prospects of winning votes than Aref. This mindset appears intact among Reformists as Iran heads for its next presidential vote. Indeed, prominent Reformist political analyst Mohamamd Atrianfar has said that Rouhani will be the sole candidate for the Reformists in the 2017 election, a statement that has been repeated by other Reformist figures.

Meanwhile, only one year out from the next presidential poll, the conservatives appear to have used all their cards and at present don’t have a new face to rally behind in the contest.

Gholamreza Mesbahi Moghadam, the spokesman of the Combatant Clergy Association, recently announced that the group would back Rouhani in 2017. “I should state that if we find no better choice, we would start talks with Rouhani,” Mesbahi Moghadam told Khabar Online, a news outlet seen as being close to Parliament Speaker Ali Larijani. Meanwhile, conservative lawmaker Mohammad Reza Mir Taj Al-Dini told Entekhab News, “The conservatives won’t invest in the candidates of the 2013 election.” Moussa Ghorbani, a former conservative parliamentarian, said, “If Rouhani succeeds in realizing his promises, especially on the economy, it is possible that the conservatives will come to support him.”

As conservative analyst Naser Imani has pointed out, “If Rouhani wins public approval before the election, the conservatives won’t unveil their best candidate for the election.” However, Imani added, “Conservatives prefer Rouhani to Ahmadinejad, and we won’t commit wrongdoing again.”

In this vein, Hossein Kanani Moghaddam, political director of the conservative Resistance Party, told Al-Monitor, “Rouhani has been conservative, and his slogans have not been against the conservatives’ policies.” He added, “We haven’t reached a conclusion on what to do in the next presidential election, but if Rouhani persuades us that his second term would be in the interest of the country, we would support him. He should make the [Joint Comprehensive Plan of Action] work and implement the ‘resistance economy’ in order to attract our attention.”