The possible leadership of Ali Akbar Nategh-Nuri in Iran's upcoming parliamentary and Assembly of Experts elections may very well change the nature of the game in Iranian politics. 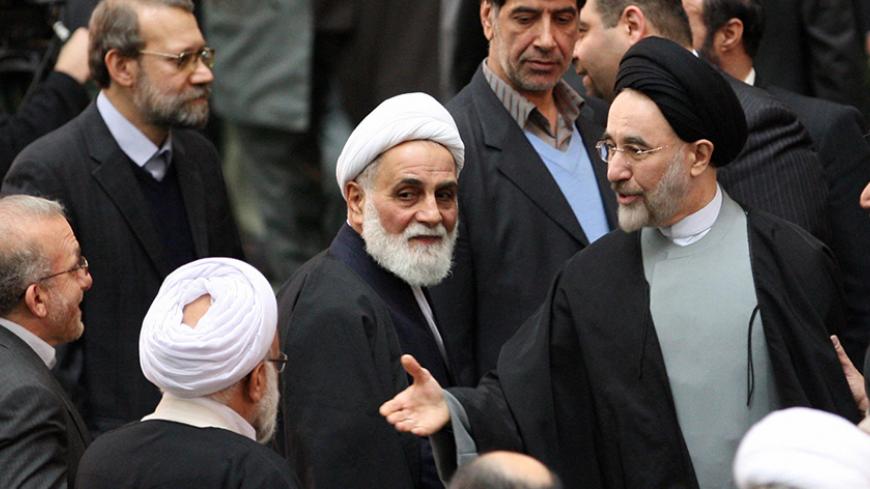 Former Iranian President Mohammad Khatami (R) speaks to members of parliament as he stands next to former parliament Speaker Ali Akbar Nategh-Nuri (C) and his successor, Ali Larijani (2nd L), during a ceremony held at the parliament in Tehran, Dec. 2, 2008. - GETTY IMAGES/Atta Kenare

TEHRAN, Iran — Whenever Iran is about to hold an election, the country’s two main political camps — conservatives and Reformists — start asking their most prominent figures to step forward and assume leadership. With parliamentary and Assembly of Experts elections due in February 2016, Ali Akbar Nategh-Nuri is once again in the spotlight.

Nategh-Nuri is currently the head of the supreme leader's inspection office. In the past, he has served as parliament Speaker, among other prominent duties, reflecting his position as one of the most respected and influential figures in the conservative camp. In the 1997 presidential election, Nategh-Nuri was defeated by Mohammad Khatami — then a lesser-known Reformist figure — stunning many political observers. Following Khatami’s victory, the conservative leadership was put on Nategh-Nuri’s shoulders, who tried his best to provide direction amid a critical turning point. In Nategh-Nuri’s telling, his efforts culminated in the conservative victory in the Islamic Republic’s first city council elections in 1999, and also the 2004 parliamentary vote. Yet, despite the growing calls for Nategh-Nuri to directly enter the fray at that time, he steered clear of personally contesting any vote.

As the 2005 presidential election was approaching, several conservative figures announced their candidacies, including Ali Larijani (current parliament Speaker), Mohammad Bagher Ghalibaf (current mayor of Tehran), Mohsen Rezaie (former Islamic Revolutionary Guard Corps commander), Ali Akbar Velayati (head of the Center for Strategic Research), Ahmad Tavakoli (member of parliament) and Mahmoud Ahmadinejad. The Coordinating Council of Conservatives, chaired by Nategh-Nuri, then selected Larijani as the final candidate in a bid to preempt a splitting of the conservative vote, asking other conservative leadership. Of note, Nategh-Nuri was seriously opposed to Ahmadinejad’s decision to run for office in 2005. Commenting on a meeting with Ahmadinejad back then, Nategh-Nuri has publicly stated, “When Ahmadinejad explained his agenda for the presidency, I told him, 'I listened to you carefully, but either didn’t understand anything, or you spoke beyond my knowledge [with sarcasm].'” Prior to the selection of Larijani as its final candidate, Ahmadinejad had threatened the Coordination Council of Conservatives that he would step forward if it didn’t select him as its man. Indeed, Ahmadinejad won the election against all odds.

After Ahmadinejad left office, Nategh-Nuri demanded that the former president be put on trial. Without using any names, he said, “A person assumed a responsibility in the country and squandered the country’s money however he wanted; I was told that during his tenure, it was not right to stop him, and now that he is gone, I’m told that it is not fair to give him trouble. So how and when do we make a decision to get people’s money back?”

In the 2013 presidential election, conservatives were still divided — to the benefit of Reformists and moderates. Hard-liners and Ahmadinejad’s men dominated the coservative camp. Thus, the conservatives, hopeless about persuading Nategh-Nuri to lead them, asked Ayatollah Mohammad Reza Mahdavi Kani, then chairman of the Assembly of Experts, to direct them — but his efforts didn’t bear any fruit. Mahdavi Kani’s efforts to avoid splitting the conservative vote failed. Meanwhile, Nategh-Nuri, along with Expediency Council Chairman Ayatollah Ali Akbar Hashemi Rafsanjani and Khatami, decided to back moderate Hassan Rouhani in the election, with an outcome that shocked hard-liners. Mahdavi Kani passed away the following year, once again leaving the conservatives without a figurehead. Ever since, and with key parliamentary elections approaching, conservatives have been doing their best to persuade Nategh-Nuri to step into the fray. So far, Nategh-Nuri has refused all requests for his leadership and candidacy, saying, “I’ve passed it, and it is now the youngsters’ turn.” Indeed, as long as the conservative camp is dominated by hard-liners, it appears unlikely that Nategh-Nuri will return to his old home.

Some influential Reformist figures have approached Nategh-Nuri in the hopes of him aiding them in the parliamentary elections by nominating himself as their top candidate. This scenario is, however, improbable as Nategh-Nuri is unlikely to entirely turn his back to his conservative roots. Hossein Kanani Moghaddam, a conservative political analyst, told Al-Monitor, “Nategh-Nuri won’t accept the Reformists’ requests.” Other recent reports separately speak of a decision by Nategh-Nuri to back Larijani in the parliamentary elections. According to these reports, he has reportedly been engaging with high-ranking figures, including grand ayatollahs in the holy city of Qom, to get them to state their support for Larijani — both behind closed doors and in public. In the words of Kanani Moghaddam, “Nategh-Nuri and Larijani have common views on domestic issues and foreign affairs, and they both follow the path of moderation regarding different matters. If Nategh-Nuri doesn’t run in the elections, he will surely support Larijani.”

Despite the various scenarios being entertained, the most likely one appears to be Nategh-Nuri’s further adjoining with the new “moderate” camp — with Rafsanjani’s help. This camp is composed of figures such as Rouhani, Larijani and Velayati, all of whom hold moderate views on domestic and foreign policy issues.

If Nategh-Nuri opts for this approach, the game for the Assembly of Experts would radically change as there would likely be a surge in the number of important moderate figures who would be seeking to enter this important clerical body. So far, Rafsanjani has stated his candidacy, while there is a high possibility of Rouhani and Seyed Hassan Khomeini nominating themselves, too. In the words of Kanani Moghaddam, the conservative political analyst, “I think Nategh-Nuri will be an important pillar of the ‘moderation’ camp.”