If Ali Akbar Nategh-Nouri assumes leadership of Iran's traditional and moderate conservatives, it could be positive news for cooperating with the Hassan Rouhani administration. 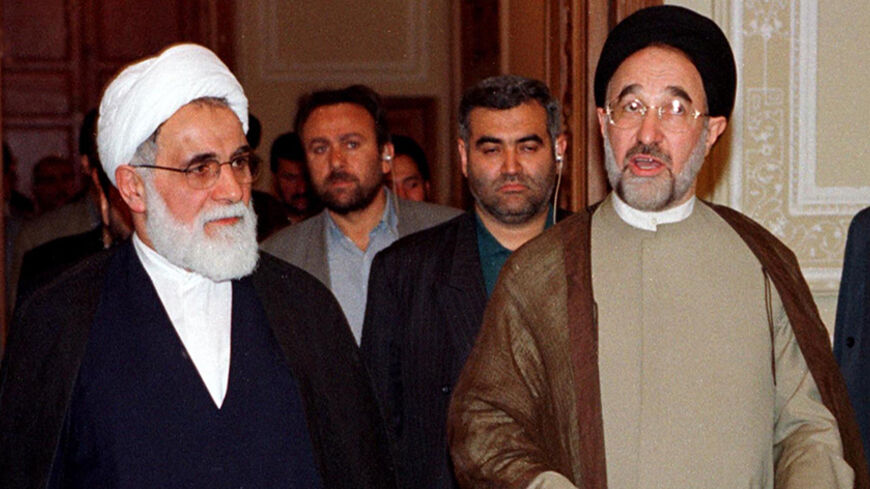 TEHRAN, Iran — In October 2014, Ayatollah Mohammad-Reza Mahdavi Kani, an influential leader of the conservative coalition, passed away. The event has posed significant problems for Iran's conservatives. Mahdavi Kani's successor as the head of the Assembly of Experts — the body that chooses the supreme leader — must be chosen by early 2015. Furthermore, both the Assembly of Experts elections and the parliamentary elections in 2016 will need a unifying voice within the conservative camp — a voice that is currently lacking with the passing of Mahdavi Kani.

One person being unofficially discussed as successor is Ali Akbar Nategh-Nouri, the current head of the Inspection Office of the Supreme Leader of Iran. Nategh-Nouri could recover the relative solidarity of earlier decades within the conservative camp or, at least, prevent it from further fracture.

The conservatives had fractured long before Mahdavi Kani’s death. Saeed Laylaz, a political analyst, told Al-Monitor, "When Mr. Mahdavi Kani was alive, he could not prevent the collapse of the coalition of conservatives in the election.” Laylaz said that “the rise of radicalism” led by Ayatollah Mohammad-Taqi Mesbah-Yazdi and former President Mahmoud Ahmadinejad, who was first elected in 2005, “marginalized the senior conservative officials.”

In Iran’s 2005 presidential election, Mesbah-Yazdi, with the support of individuals such as Ahmadinejad, helped collapse the previous unity of the conservatives by separating them into various camps: those known as hard-liners, or radicals, and the traditional conservatives.

In those elections, the Coordinating Council of Conservatives chose traditional conservative Ali Larijani, the current speaker of parliament, as the only conservative candidate. Having observed that some conservatives challenged the decision of Ahmadinejad to run, Nategh Nouri withdrew from the coalition’s leadership.

During the 2009 presidential election, Ahmadinejad sharply attacked Nategh-Nouri’s children and placed them alongside the children of Ayatollah Akbar Hashemi Rafsanjani. Nategh-Nouri thus grew upset with the elders of the conservative coalition and backed the moderate Hassan Rouhani during the 2013 presidential election, saying of him: "The deeds and behaviors of Rouhani do not disturb and annoy any human being.”

A senior cleric close to Iran's powerful institutions, speaking to Al-Monitor on condition of anonymity, said, "Today, there are some powerful influential characters within the coalition known as the conservatives that do not fit in with the moderate tendencies and desires held by Nategh-Nouri. Accordingly, many conservatives wish to witness appropriate circumstances, in which such characters as Nategh-Nouri can repeat his past effectiveness and impact and restore their past integrity [before the advent of Ahmadinejad and Mesbah-Yazdi, which led to the collapse of their cohesiveness].”

Under these circumstances, the various groups within the conservatives have held numerous conferences to restore their cohesiveness. However, the presence of groups backed by Mesbah-Yazdi, as well as their heavy shadow on these conferences, has eliminated any hope of achieving a reasonable consensus.

These factors have made survival difficult for conservatives against Reformists. Reformists, who are the main rivals of conservatives in elections, have maintained their relative consistency. They are trying to gradually return to power, of course, with the support of Khatami.

Laylaz believes that Nategh-Nouri “desires to resort to Mr. Hashemi Rafsanjani, who is a cleric acceptable to both the supreme leader and traditional conservatives, to become close to the Reformist camp.”

However, it can be argued that Nategh-Nouri does not want to become close to the Reformist camp because he is now in the camp of moderate conservatives. Some prominent conservatives are trying to bring him back into the political arena, despite his recent response to these requests: "My political life is over."

The senior cleric added, "Nategh-Nouri can guide the conservatives in a direction that can win the majority quorum [in terms of relative moderation] of the seats of the Assembly of Experts and parliament."

If moderate conservatives, led by Nategh-Nouri, can win the parliamentary elections, radicals cannot play significant roles in future elections. In other words, the appropriate performance Nategh-Nouri's supporters in parliament can persuade the Iranian people to turn against radical candidates, including Mesbah-Yazdi in the Assembly of Experts election.

Assuming these hypotheses are correct, one should expect to see Mesbah-Yazdi to fail in the next Assembly of Experts election. Actually, these factors pave the way for competition among such moderate clerics as Rafsanjani, Chairman of the Expediency Council Hashemi Shahroodi and even Nategh-Nouri himself.

It appears that the major leaders of the Reformist and conservative camps have confirmed the power and effectiveness of Nategh-Nouri. However, the problem is that although the elders and influencers of conservative groups acknowledge the above fact, they have failed to understand and make a serious decision to concede to his leadership. It would be a difficult task to get Nategh-Nouri to accept this responsibility. Yet, by all accounts, no event in the world of politics is impossible.