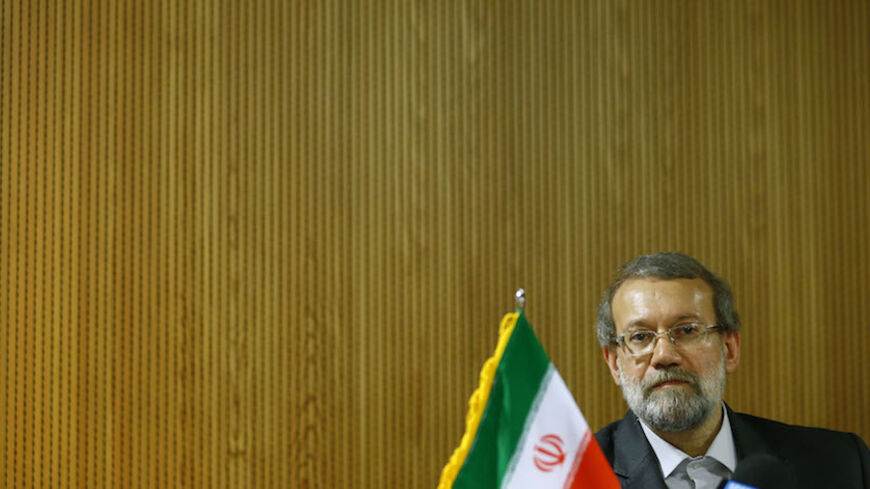 Ali Larijani, speaker of the Iranian parliament, pauses during a news conference after the 129th Assembly of the Inter-Parliamentary Union, Geneva, Oct. 9, 2013.

The conservative political factions in Iran have faced many splits. With the death of Ayatollah Mohammad Reza Mahdavi Kani and Habibollah Asgar Oladi, two influential figures who played a mediator role between the various factions, the conservatives' problems have worsened and they are farther from unity today than ever before. Ali Larijani, the speaker of parliament, is trying to form a broad party to rebuild some unity among conservatives and to maintain his position as speaker while warding off more extreme factions.

Larijani becomes speaker of the parliament

Ali Ardashir Amoli Larijani is the son-in-law of the late Ayatollah Morteza Motahari, who was one of the theorists and main founders of the Islamic Republic of Iran. Larijani was an elite student of computer science at Sharif University but following his father-in-law's recommendation, he changed his path to study philosophy. He held many positions in the 1980s, such as deputy chief of staff at the Islamic Revolutionary Guard Corps from 1982 to 1992. In 1994, while he was minister of culture, he received Ayatollah Ali Khamenei's commandment to become the chief of the Islamic Republic of Iran Broadcasting (IRIB), which was an important change in his political life.

His time as president of IRIB (1994-2004) spanned the two terms of Reformist Mohammad Khatami's presidency from 1997 to 2005. By the end of Larijani's 10-year period at IRIB — which led to some Reformists' dissatisfaction of him and strengthening of his position among the conservatives — he had become the lead candidate of the conservatives in the 2005 presidential elections.

Despite Ali Akbar Nategh-Nouri's support of Larijani and selecting him as the only candidate of the conservatives, he was outflanked by the right. The surprise victory of the upstart hard-line Mahmoud Ahmadinejad and his spiritual mentor Ayatollah Mohammad Taghi Mesbah Yazdi ruined all the plans of the conservatives.

In August 2005, Larijani became secretary of the Supreme National Security Council and also assumed responsibility of Iran’s nuclear case and negotiations. He had been a critic of previous negotiator Hassan Rouhani for the 2004 Paris nuclear agreement. His famous words, "A wise man doesn’t swap a pearl for a candy,” are still used in political circles today.

In a Financial Times interview, Larijani said, “I have great respect for Mr. Rouhani. He is my friend. The nuclear issue is clear — we want nuclear technology and this cannot be weighed against promises like not blocking Iran’s entry to the WTO [World Trade Organization] or supplying wings for aircraft.”

In 2007, Larijani was dismissed from the nuclear file over disputes with Ahmadinejad on how to deal with the nuclear issue. He ran in the 2008 parliamentary elections as a representative of Qom, replacing Gholam-Ali Haddad-Adel as the speaker of parliament and forming a faction called Followers of the Leader.

Larijani's attempt to save the conservatives

With parliamentary elections planned for February 2016, it appears that Larijani's consultation with conservative figures such as Ayatollah Hashemi Rafsanjani and Nategh-Nouri is aimed at turning the Followers of the Leader faction into a more formal political party.

Behrooz Nemati, a parliament member and member of the Followers of the Leader faction, told ISNA: “The president of the parliament will form his party with the support of the people. … The preliminary stages of forming the party are being prepared.”

Larijani, in an interview with Iranian television, did not reject the possibility of forming a party and said: I always encourage those people who consult with me about forming a party to form it so that we have powerful parties in the country.” He added: “If I really feel that I can be helpful for a party, I will help for sure.”

One of the reasons that may motivate Larijani to form a party could be the people's negative view toward the conservatives, as a result of its extremists' performance. Therefore, distinguishing between moderate conservatives and extremists such as the Resistance Front, led by Ayatollah Mesbah Yazdi, is among the main goals of Larijani’s parliament, as a new attempt in the political arena of Iran.

Heshmatollah Falahatpish, a conservative political activist and former parliament member, told Al-Monitor, “Mr. Nategh-Nouri's support in forming a party by Mr. Larijani is to show the opposition the rise of new conservative leaders. He supports a political structure that consists of the elites, which is not a trend that will lead to radicalism."

Mohammad Javad Haghshenas, a Reformist activist, told Al-Monitor that the formation of a party by Larijani is the only prescription that can be predicted for the conservatives, which can save them from a total collapse.

By pointing to Nategh-Nouri's support of Larijani, Haghshenas said that Ayatollah Rafsanjani is certainly among those people who support Larijani to form a party and participate in the parliamentary elections.

However, Larijani has determined opponents who call him "silent on sedition" because of him not condemning the 2009 postelection events. Most of Larijani's opponents can be found among the members of the Resistance Front and the Mo'talefe (Coalition) Party.

Elyas Naderan, a conservative member of Iran's parliament, was pessimistic when telling an Iranian news site: "I do not know if Larijani's actions are strengthening the conservatives' unity or weakening it."

Hamid Reza Taraghi, a member of the Mo'talefe Party's central committee and former parliament member, told Al-Monitor, “Forming a pervasive party is not an easy job, and Mr. Larijani launching it is unlikely because it takes a long time.” He added that forming such a party is a planned action to divide the conservatives. “The Reformist newspapers just cover and follow the news related to forming a party by Mr. Larijani,” he said.

Haghshenas believes that the growing closeness between the Resistance Front and the Mo'talefe Party is a worrying event for the conservatives. In the 2005 presidential elections, Mo’talefe supported Larijani’s candidacy; however, they officially supported Ahmadinejad during the 2009 election.

Haghshenas said that after Oladi's death and resignation of important figures of this party, such as Abdollah Jasbi and Hassan Ghafourifard, the Resistance Front is trying to get close to the Mo'talefe Party to establish a presence in the parliamentary elections that is more emphasized and successful. This could mean that as in the 2005 presidential elections, Larijani may be outflanked by the right again.

According to an informed source, one of Larijani's goals to form a party is preserving his chairmanship seat of the parliament, which has been held by him for the last eight years.

He added that if Larijani becomes parliament speaker again, Rouhani's government will have no problems. He is no stranger to cooperation, and we saw an example in the agreement between Rouhani and Larijani when appointing Abdolreza Rahmani Fazli, a conservative, as the interior minister.

However, because of his reputation and popularity in Qom, Larijani will most likely be re-elected in the parliament. Whether he retains his position as speaker will be determined by how successful he is in forming a party.