Iranians gear up for parliamentary elections

Hard-liners have managed to seize control of the conservative camp, but their victory in the upcoming parliamentary elections is not guaranteed. 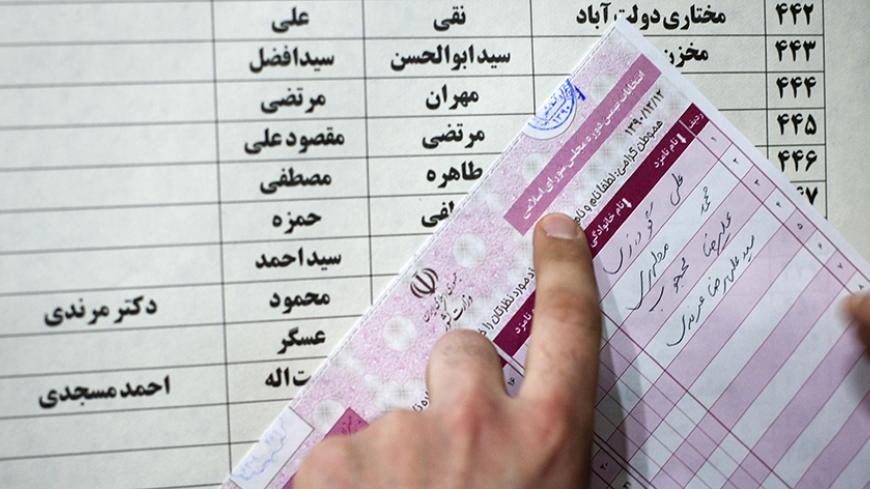 A man fills in his ballot during Iran's parliamentary election, at a mosque in southern Tehran, March 2, 2012. - REUTERS/Raheb Homavandi

TEHRAN, Iran — Over the past year, Iranian conservatives have strenuously sought to reach consensus on how to win the parliamentary elections scheduled for Feb. 26. Prior to that, moderate and hard-line factions had fought each other for a decade for dominance within the conservative camp. At present, the moderates appear to have been defeated. It may seem odd to some, but the moderates are likely to be happy about that.

The hard-liners have strict views on the enforcement of Islamic law and oppose closer relations with the outside world, including the nuclear deal Iran signed with the six world powers. The moderates, who share some views with the Reformists, do not like to be compared with the hard-liners, who are unpopular among the general public. The conservative camp is increasingly defined by orthodoxy, and this is harming the moderates’ image among voters.

After years of attempts to force moderates from the conservative leadership, the hard-liners seem to have succeeded. The defeat, however, is voluntarily and guided by moderate leaders, including Ayatollah Ali Akbar Hashemi Rafsanjani, chairman of the Expediency Council; Ali Akbar Nategh-Nuri, head of the supreme leader’s Inspection Office; and Ali Larijani, speaker of parliament.

Rafsanjani and Nategh-Nuri were marginalized by the hard-liners led by Ayatollah Mohammad-Taghi Mesbah Yazdi during the 2005 presidential elections, which resulted in victory for Mahmoud Ahmadinejad. Subsequently, Rafsanjani and Nategh-Nuri gradually left the stage. Indeed, up until a few years ago, Larijani was the only prominent moderate remaining in the conservative camp.

During Ahmadinejad's second term (2009-13), Larijani became the target of harsh attacks by hard-liners. For instance, Ahmadinejad released a short video in February 2013 implying that a brother of Larijani was involved in corruption. Moreover, in another incident that same month, hard-liners threw shoes and prayer rugs at Larijani during a speech in the holy city of Qom. These developments might have had a hand in the incumbent speaker’s departure from the conservative camp. Of note, Larijani came to the aid of the moderate Hassan Rouhani after his election as president in June 2013. Larijani’s role in whipping enough votes in parliament in favor of the nuclear deal should not be ignored. Indeed, both Rouhani and Foreign Minister Mohammad Javad Zarif have repeatedly thanked Larijani for the positive role he played.

Over the past year in the run-up to the parliamentary elections, three key ultra-conservative leaders have tirelessly met in an attempt to arrive at a consensus about an election strategy: Ayatollah Mohammad Reza Mahdavi Kermani, head of the Combatant Clergy Association; Ayatollah Mohammad Yazdi, head of the Society of Seminary Teachers of Qom; and Mesbah Yazdi, spiritual leader of the Endurance Front. They asked Larijani and his influential Followers of the Leadership faction to join them, but Larijani declined. Instead, before registering as a candidate for the elections, Larijani announced, “I run on an independent ticket.”

After months of negotiations and countless meetings with other hard-liners and what remained of the moderate factions in the conservative camp, on Feb. 7 the conservative leadership published a list of 30 candidates they intend to support for parliamentary seats representing the Tehran district.

The list astonished political observers. Only three of the 30 were relative moderates, while a significant number of candidates were hard-liners close to Mesbah Yazdi, who has always coveted the conservative leadership. From the looks of it, Mesbah Yazdi’s dreams appear to be close to coming true, but all is far from well in the conservative camp.

The conservatives' list raised eyebrows and disagreements even among conservatives and may ultimately lead to an unprecedented defeat for the hard-liners. For instance, the parliamentarian Hassan Ghafouri Fard told a local news agency, “Most top conservative candidates aren’t pleased with the published list, and many of them aren’t willing to withdraw in favor of the selected candidates, as they had previously promised.”

Moreover, Hossain Kanaani Moghadam, secretary of the Green Party, said, “The current published list is not defensible. It would be better if some figures that had the ability to offer [their] reputation and [add] value to the list were on the ticket.” He emphasized, “They don’t have much of a chance, and only five of them — at most — will manage to gain enough votes to enter the next parliament.”

Meanwhile, according to  Serat, a new hard-line outlet, Gholam-Ali Haddad Adel, spokesman for the current conservative coalition, has asked the selected conservative candidates to sign commitments to vote for his campaign to defeat Larijani to become the next speaker. In response to Serat's report, Haddad Adel tweeted his denial of the claim, and when asked at a news conference whether he hoped to be the next speaker, he replied, “I will do as I think will be necessary.”

Even so, Amir Mohebian, a moderate conservative and prominent political analyst, said, “The conservative ticket conveys a bad message for Ali Larijani and his position as the parliament speaker.” He noted, “Haddad Adel views his status and situation in the next term of the parliament as appropriate and is getting ready for the speaker position, because he has managed to include many hard-liners in the [conservative] list and has attracted their attention.”

In contrast, Elyas Naderan, a prominent hard-liner and a candidate on the conservative ticket, doesn’t think Haddad Adel has a chance of becoming the next speaker. “I don’t think there will be a serious rival to Mr. Larijani for chairing the [next] parliament, and we won’t face any unexpected changes concerning this matter,” Naderan told ISNA, the Iranian Students' News Agency.

In sum, despite dominating the conservative ticket, it appears the hard-liners’ chances of actually winning the elections are slim. This is particularly so because many moderate candidates, such as the prominent parliamentarian Ali Motahari and Larijani, are maneuvering to assemble their own rival lists or perhaps even join the Reformists’ list.

Ahmad Shirzad, a former Reformist member of parliament, told Al-Monitor, “Hard-liners will be seriously defeated in the elections, as they supported the eight-year presidency of Ahmadinejad, who had the worst economic performance.” He added, “Personally, I think moderate figures within the conservative camp, such as Ali Motahhari, could be on the Reformists’ list.”