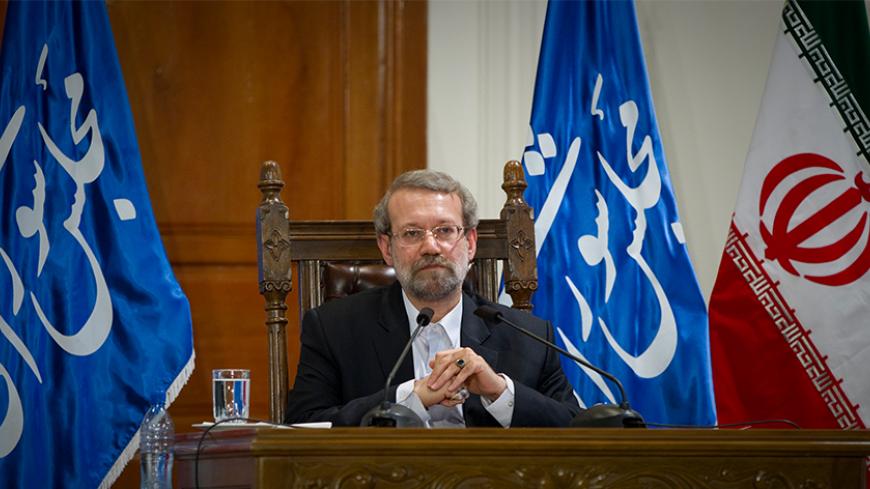 The word in Tehran is that parliament Speaker Ali Larijani and President Hassan Rouhani are close to forming an alliance. If this is true, it would mean that a new and strong political camp is about to enter the arena.

Larijani, known as a moderate conservative, has been chairing parliament since 2008. Following the disputed 2009 presidential election and its violent aftermath, Larijani was labeled as “the silent man of sedition” by hard-liners who charged that he was refraining from condemning the protests. Today's conservative camp, which is increasingly defined by its hard-liners, has seen many of its senior members separate from it in past years. These include Ayatollah Hashemi Rafsanjani, chairman of the Expediency Council; Ali Akbar Nategh-Nuri, head of the Supreme Leader’s Inspection Office; and President Hassan Rouhani, a moderate conservative who remains loyal to his longtime patron, Rafsanjani.

Rafsanjani and Nategh-Nuri have been the target of conservative infighting. Both were initially marginalized by hard-liners who supported Mahmoud Ahmadinejad against Rafsanjani in the 2005 presidential election. But that wasn’t the last of it. In the televised presidential debates with candidate Mir-Hossein Mousavi preceding the 2009 vote, Ahmadinejad accused Rafsanjani and Nategh-Nuri’s sons of corruption on live television. After these accusations in front of millions of Iranian viewers, neither Rafsanjani nor Nategh-Nuri were supported by their old conservative friends.

These incidents point to an overarching trend over the years — more moderate figures have been forced to part ways with the conservative camp. As a result, the latter is now dominated by hard-liners. This trajectory was accelerated under Ahmadinejad, who strengthened hard-liners more than at any point in the history of the Islamic Republic.

During his second term (2009-2013), Ahmadinejad’s relationship with Larijani went so sour that Ahmadinejad tried to disgrace the parliament speaker before all other lawmakers. The then-Iranian president screened a secretly recorded tape of Larijani’s brother, Fazel, allegedly asking for a bribe.

Seven days later, on Aug. 6, 2013, a group of hard-liners seemingly close to Ahmadinejad threw shoes at Larijani while he was giving a speech in the holy shrine of Fatima Masumeh in Qom. While no culture views shoe throwing as a positive, it is a particularly disrespectful act in the Iranian context. Indeed, this incident may have been the impetus for Larijani to leave the conservative camp.

Mohammad Taghi Fazel Meybodi, former adviser to ex-President Mohammad Khatami, told Al-Monitor, “Larijani’s views have no common ground with the hard-liners in the conservative camp. They have given him a hard time.” It should, thus, come as no surprise that following Ahmadinejad's departure from the presidential palace, Larijani has been offering his support for Rouhani’s policies in various arenas — especially on the nuclear issue, which has turned into a hot topic among hard-liners.

During the nuclear negotiations between Iran and six world powers, hard-liners at one point attempted to sabotage the talks by introducing a bill in parliament. However, this effort was thwarted as Larijani strongly voiced his disagreement and managed to amend the bill in Rouhani’s favor.

On July 3, less than two weeks before the Joint Comprehensive Plan of Action (JCPOA) was agreed upon, Larijani lambasted hard-liners for attacking Iranian negotiators, saying, “Unfortunately, some are twisting the facts about the nuclear issue, worrying people with ill-considered remarks.”

Soon after the JCPOA was announced, hard-liners started making a fuss over Foreign Minister and chief negotiator Mohammad Javad Zarif, who went to parliament to submit the JCPOA text and respond to questions about the accord. A few days after this session, the Ministry of Foreign Affairs provided parliament with the formal translation of the JCPOA. Hard-line members of parliament, led by controversial figure Mahdi Kouchakzadeh, harshly aired their objections to Larijani. Most members of parliament supported the speaker, while others backed Kouchakzadeh. A few minutes after the verbal sparring ended, Larijani said with sadness, “One of the brothers [members of parliament] has said that Larijani doesn’t permit discussion of the nuclear issue in parliament because Rafsanjani and Rouhani have paved the way for him to become speaker of parliament … why do you say that?” Larijani then went on to rhetorically ask, “They have also said somewhere that the dogs of Ahmadinejad and [former senior Ahmadinejad adviser Esfandiar Rahim] Mashaei have more dignity than him [Larijani]; how could one’s dog have more dignity than a Muslim when I have made my declaration of faith?”

Apparently fed up with the hard-liners, Larijani is now rumored to be joining hands with Rouhani to secure a landslide victory in the February parliamentary elections. Such a development would come at the expense of radical forces.

Meybodi told Al-Monitor, “Larijani’s political thoughts are close to Rouhani’s. Larijani has also adopted good policies toward the nuclear issue and has parted ways with the hard-liners.” Indeed, Safar Naeimi Raz, the spokesman for the Larijani-led parliamentary “Followers of Velayat [Leadership]” faction said, “We [associates of Larijani and Rouhani] can stand alongside each other in the parliamentary elections and other matters,” adding that “Larijani’s stance is close to Rouhani.”

Heshmatollah Falahat Pishe, a former conservative member of parliament, clarified the greater context to Al-Monitor: “Hashemi Rafsanjani, Nategh-Nuri, Rouhani and Larijani are all conservatives who have distanced themselves from their camp during the past 14 years; thus, considering their backgrounds, the formation of a coalition is possible.” He underscored that “the fact is that striving to stop the hard-liners’ vision [for Iran] from spreading in society has strengthened the possibility of a Larijani-Rouhani coalition.”

Meybodi agreed. He told Al-Monitor, “It’s not unlikely at all that they [Rouhani and Larijani] form a new camp to stop the hard-liners. In fact, Reformists aren’t capable of silencing the hard-liners; this job can be done by Larijani and the moderate camp.”

“Moderation,” a key term used in Rouhani’s electoral campaign, is now the name of his camp, which enjoys the presence of Rafsanjani and Nategh-Nuri. This camp is now said to expect the formal inclusion of Larijani as one of its pillars.

Yet, despite the pragmatism motivating a moderate coalition, its formation is facing several obstacles, the most important of which is rooted in Larijani’s disagreements with the Reformists. Explaining potential difficulties the “moderation” camp may face, Pishe told Al-Monitor, “Rouhani will be cautious in this coalition, because he may lose the Reformists’ support. So to avert that tendency, he will have some of the Reformists join the coalition.” Whether or not Rouhani succeeds in this balancing act, the conservatives face difficult challenges ahead.