Why another Khomeini may soon shape Iranian politics

Of the many Iranian figures touted as potential successors to the late Ayatollah Akbar Hashemi Rafsanjani, Hassan Khomeini stands out as the one person capable of assuming leadership of the moderate camp. 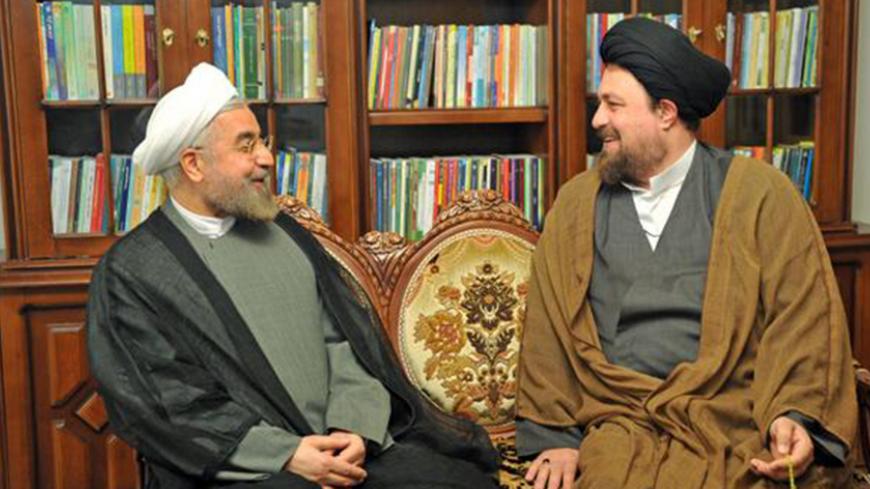 The late Ayatollah Akbar Hashemi Rafsanjani was known as the spearhead of the “moderate” camp in Iran. He also served as the only bridge between the ruling establishment and the Reformists, who faced restrictions following the unrest related to the 2009 presidential elections. When Rafsanjani passed away in January, his death was a major shock for his supporters, who turned out in huge numbers for his funeral alongside politicians who shared his approach to politics.

Considered a “pillar” of the 1979 Islamic Revolution that toppled the US-backed shah, Rafsanjani held several prominent positions over the past decades. In addition to serving as parliament speaker and president, Rafsanjani also played a crucial role in the last years of his life — establishing and leading the moderate camp, and thereby, helping Reformists survive.

In the 2009 presidential elections, the incumbent, Mahmoud Ahmadinejad, was proclaimed the victor, but the Reformists, who had two candidates in the race, rejected the results, charging that the balloting had been rigged. After extensive protests, the Reformist candidates, Mir Hossein Mousavi and Mehdi Karroubi, were subjected to house arrest in 2012, and the Reformists' activities were restricted.

In addition to Reformists, figures who feel that their home in the conservative camp has been co-opted by hard-liners have been attracted to the moderate camp that emerged in recent years. President Hassan Rouhani, the head of the supreme leader’s Inspection Office Akbar Nategh-Nouri and parliament Speaker Ali Larijani are the most prominent faces among the moderates.

Almost the moment Rafsanjani died, many began to wonder who would replace the man considered the thorn in the hard-liners' side. Many figures have been floated as possible successors, but among them, one stands out as a possibly powerful leader of the moderates and one capable of resolving tensions and disagreements between the Reformists and the ruling establishment: Seyyed Hassan Khomeini.

Khomeini, the grandson of Ayatollah Ruhollah Khomeini, founder of the Islamic Republic, has thus far focused primarily on his studies in Islamic jurisprudence rather than politics. Indeed, despite repeated calls for him to enter the political arena, Khomeini rarely talks politics, and when he does address a political issue, he employs metaphors and poems.

A relatively young 44, Khomeini is popular among youths, because he has constantly emphasized countering hard-line views. This has become problematic, however, as it has made him a frequent target of the hard-liners.

Last year, as elections for the Assembly of Experts approached in February, calls for Khomeini’s candidacy grew, with Rafsanjani for the first time publicly asking him to step forward. After Khomeini finally agreed to run, the Guardian Council, tasked with vetting candidates, barred Khomeini’s candidacy, supposedly because of his inadequate knowledge of Islamic jurisprudence. The council’s decision was assessed by many analysts as politically motivated, as Khomeini was endorsed by many grand ayatollahs, including the highly respected Hossein Vahid Khorasani, and has been teaching Islamic jurisprudence at the highest level at the Qom seminary for more than a decade.

Khomeini is one of the figures whom Rafsanjani hoped would continue his work on Iran’s political stage. In a rare statement in August 2015, Rafsanjani told Toloue Sobh weekly, “It is better if [Hassan Khomeini] runs for the [Assembly of Experts] elections. It is unclear whether I will be alive. It is his turn, and he should come [forward] to protect the revolution [from hard-liners].”

When it comes to succeeding Rafsanjani, Khomeini enjoys several advantages. He hails from the famous and well-respected Khomeini family, and he is fully accepted among moderates, Reformists and even a significant number of conservatives, including members of the highly influential Society of Seminary Teachers of Qom.

In May 2014, the conservative Ayatollah Mohammad-Ali Movahedi Kermani, a Tehran Friday prayer leader with views close to the hard-liners, bluntly responded to hard-liners’ attempt to interrupt Khomeini’s speech on the occasion of his grandfather’s death. Offended by their actions, Movahedi Kermani said, “What is this wrongdoing that you do against the family and grandchildren of the Imam [Ruhollah Khomeini]? These actions must be condemned.”

He added, “While Hassan was insulted, the supreme leader embraced him and kissed him. The meaning of this embrace was that you insulters must be polite [toward Hassan].”

Furthermore, the ultraconservative Ayatollah Mohammad Yazdi, a member of the Guardian Council, was upset when the grandson of the founder of the Islamic Republic was disqualified from running for the Assembly of Experts elections. He had no doubt about Khomeini’s knowledge of Islamic jurisprudence.

Moreover, being viewed as a well-respected cleric among the conservatives, Khomeini is one of the few figures who can connect the Reformists with the ruling establishment. Unlike Reformists, who are not trusted by the establishment, Khomeini is believed to have a good relationship with the supreme leader and sometimes meets with him.

Although some analysts believe Nategh-Nouri, who enjoyed a close relationship with Rafsanjani, is a potential candidate for replacing him, he left the political stage more than a decade ago. Moreover, despite calls for his return, he has refused. He appears fully ready, however, to defend Khomeini against attacks by hard-liners. Noting Rafsanjani’s full support for Khomeini, Naser Imani, a conservative analyst, has argued, “Due to the origins of Hassan Khomeini and his personality, Mr. Nategh has the tendency to support and defend him from the unfair attacks.”

Unlike in the past, Khomeini is now more than ever, with the passing of Rafsanjani, sensing the need for him to enter politics and carry the burden of assuming Rafsanjani’s role on his shoulders. In this vein, Rouhani’s office published a widely shared photograph of himself and Khomeini about to shake hands as Rafsanjani, between them, takes leave. This suggests that Rouhani is counting heavily on Khomeini to play the role of Rafsanjani in the May 19 presidential elections.