The passing of Assembly of Experts chair Ayatollah Mahdavi Kani may open the door for hard-liners to take over Iran's conservative faction. 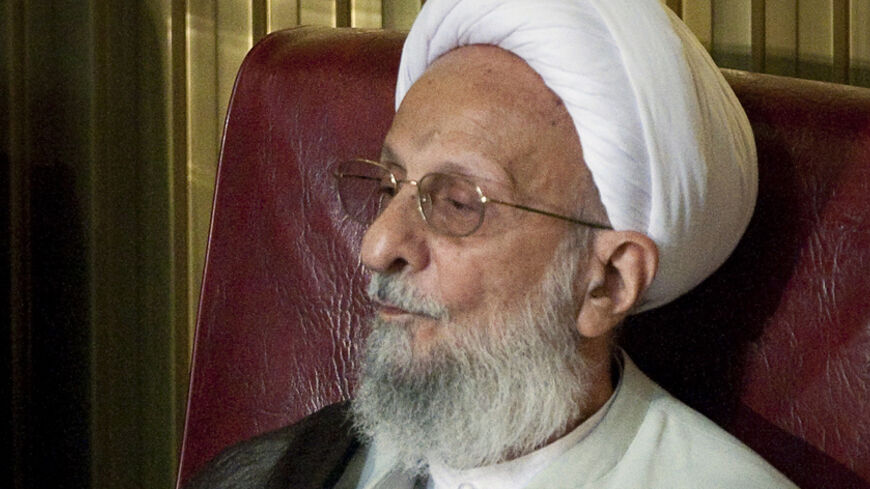 The passing of Ayatollah Mohammad Reza Mahdavi Kani has not only created a vacuum in the powerful institutions he oversaw, but also leaves the traditional conservatives within the Islamic Republic without a prominent head and at the mercy of more extreme leaders.

Mahdavi Kani was the most senior and respected leader within the traditional conservatives. He chaired the Assembly of Experts, the body that supervises and elects the supreme leader, headed the Combatant Clergy Association and founded Imam Sadegh University, which many officials within the Islamic Republic attended.

While Iran has fluid political groups and associations rather than official political parties, Iranian conservatives, or Principlists as they are called, fall into two major groupings: traditional conservatives and hard-liners.

In an editorial in Ebtekar headlined, “The fate of the Principlists after the passing of Ayatollah [Mahdavi Kani],” Mostafa Danandeh wrote that before the emergence of “extreme conservatives” (hard-liners) such as former President Mahmoud Ahmadinejad and the Endurance Front, led by Ayatollah Mohammad Taghi Mesbah Yazdi, “traditional conservatives” took Ayatollah Mahdavi Kani’s statements “as the final word.”

Now, however, Danandeh predicts “fundamental changes” for conservatives after the loss of four major figures. In addition to Mahdavi Kani, prominent conservative Habibollah Asgaroladi died in November 2013. Ayatollah Hashemi Rafsanjani and Nategh Nouri, two individuals who were prominent within the Combatant Clergy Association, have “separated” from the conservatives over their positions in favor of Reformists in the contested 2009 presidential elections.

Danandeh wrote that the absence of these figures “leaves the field open for a return of the extremists from the right.” He accused these individuals “both inside and outside of parliament” of not tolerating any statements that oppose their own views and attempting to eliminate critics from the political arena. He said that extremists have built a presence in even the “most traditional conservative party, the Islamic Coalition Party.”

The editorial did not directly accuse Mesbah Yazdi of any wrongdoing, but indirectly stated that he has been nominated, as the unofficial leader of the conservatives, to take over some of the positions Mahdavi Kani left behind.

Mesbah Yazdi, who was known as Ahmadinejad’s spiritual mentor, is a hard-line cleric who has collided with President Hassan Rouhani on a number of issues and has long had issues with Mahdavi Kani.

According to foreign-based Digarban, Mesbah Yazdi did not issue a message of condolence for the passing of Mahdavi Kani due to their “deep and old differences, which has resulted in fissures between the conservatives.” This all has contributed to a lack of unity among conservatives, something many believe cost them the 2013 presidential election.

After the funeral, Reza Naghdi offered the highest praise possible within the Islamic Republic. He told reporters that that if for any reason someone were unable to seek the advice of the supreme leader, they could always refer to Mahdavi Kani.