Shahroudi seen as likely candidate to head Assembly of Experts

Ayatollah Mahmoud Hashemi Shahroudi is considered a strong candidate to head the Assembly of Experts as the Iranian leadership reshuffles after the death of late chairman Ayatollah Mohammad Reza Mahdavi Kani. 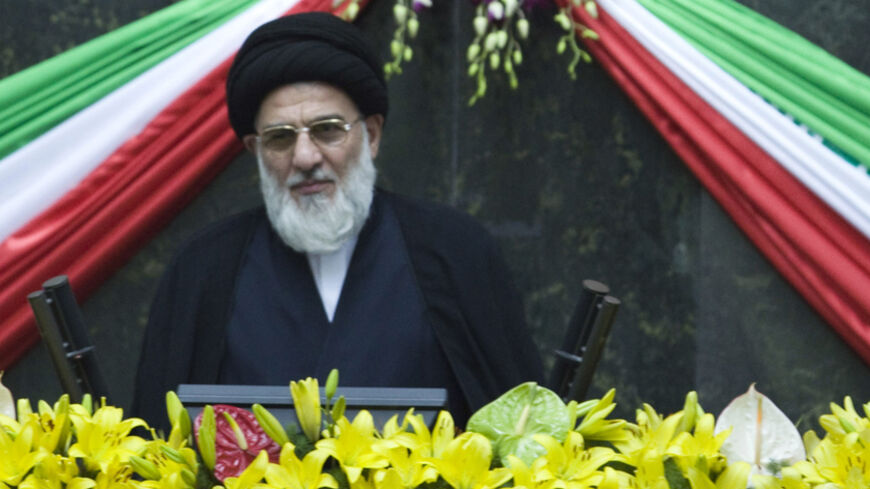 Ayatollah Mahmoud Hashemi Shahroudi, who has been named as a possible successor to Supreme Leader Ayatollah Ali Khamenei, is being seen as a likely candidate to take over the Assembly of Experts, the body that elects and supervises the supreme leader of Iran, according to Ayatollah Ahmad Katami.

Many Iranian and foreign-based Persian-language websites reported “Shahroudi as candidate for Assembly of Experts,” suggesting they consider him the most likely to take over the position after the death of late chairman Ayatollah Mohammad Reza Mahdavi Kani Oct. 21.

Ahmad Khatami also dismissed his own candidacy, saying, “Foreign [news] networks have presented my name,” but he called the reports “malicious” and rejected some foreign media outlets' portrayal of him as “quickly climbing the stairs of promotion.”

Ahmad Khatami described the Assembly of Experts as “reinforcing the supreme leader” and said the assembly will continued to be the “base of velayat-e faqih,” or guardianship of the jurist, Iran’s system of governance.

Since 2012, Ayatollah Shahroudi has appeared in the Western media as Iran’s favored potential candidate to take over Ayatollah Ali Sistani’s role as the marja of Iraq. While this speculation ignores the complex and unofficial process by which marja are elevated and promoted in Najaf, it does shed some light on Iraqi-born Shahroudi’s growing clout in Iran.

Shahroudi is also one of the top figures mentioned as a possible successor to Ayatollah Khamenei. The 66-year-old marja has strong religious credentials and is the deputy chairman of the Assembly of Experts. After Mahdavi Kani fell into a coma in June, he became the interim chairman. He was also the former head of the judiciary, serving from 1999 to 2009.

Within the Islamic Republic, Shahroudi could be considered a conservative figure but not a hard-liner like Ayatollah Mohammad Taghi Mesbah Yazdi or Ahmad Khatami. Neither is he overly close to Reformists the way Ayatollah Rafsanjani or Hassan Khomeini are. This neutrality makes him a candidate with which many of the power centers within the Islamic Republic could possibly work.

Ahmad Khatami explained that the next chairman must have a “stronger jurisprudence reputation than a political reputation” and described Shahroudi as “accepted by everyone.” He added that in a recent meeting, Shahroudi gave a speech about velayat-e faqih that “received considerable attention.”

The chairman will be elected the next time the assembly meets, which, according to Ahmad Khatami, will be in Iranian month of Esfand, which lasts from Feb. 20 to March 20, 2015.

[Editor's note: An earlier version of this article indicated that Shahroudi had been nominated to head the assembly, while in fact this possibility is still speculation.]