Does Rafsanjani want to chair the Assembly of Experts?

It's still unclear whether Ayatollah Hashemi Rafsanjani will run for the chairmanship of Iran's Assembly of Experts, which supervises and elects the supreme leader. 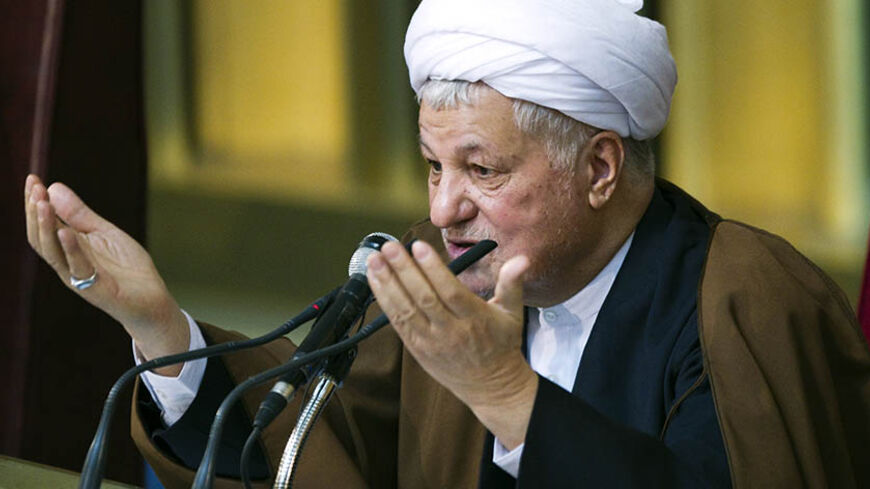 Ayatollah Ahmad Khatami, a member of Iran’s Assembly of Experts, has announced that the assembly's new chairman will be elected March 10. Following the death of the former chairman, Ayatollah Mohammad Reza Mahdavi Kani, five months ago, Ayatollah Mahmoud Shahroudi had assumed the role temporarily. However, signs indicate that the chairman's election among the assembly's board of directors is as vague as the outcome of the 2013 presidential election; it’s still unclear who will be elected chairman: Ayatollah Hashemi Rafsanjani, Shahroudi or a conservative figure?

On March 8, 2011, Mahdavi Kani was chosen as the assembly's chairman following Rafsanjani’s decision not to run for the chairmanship. Before Mahdavi Kani’s candidacy, Rafsanjani had said that he wouldn’t run if Mahdavi Kani stepped forward.

At the time, some analysts believed that replacing Rafsanjani was another move to further marginalize him by hard-line conservatives and then President Mahmoud Ahmadinejad. Although, according to a source who spoke to Al-Monitor on condition of anonymity, if anyone except Mahdavi Kani — who was considered relatively moderate — had announced his candidacy, Rafsanjani would have nominated himself.

Now that Mahdavi Kani is dead and the election of a new chairman is scheduled for March 10, Rafsanjani has warned, “If those whom I don’t consider to deserve the Assembly of Experts chairmanship have the intention of [being a candidate in the election], I will be willing to nominate myself.”

In an interview with Al-Monitor, Rafsanjani’s adviser, Gholam Ali Rajai, said: “The Assembly of Experts is an important body, as not everybody is capable of protecting the country and the system’s interests, goals and frameworks, but those who have a notable record are able to succeed in this job.”

According to a source who spoke to Al-Monitor on condition of anonymity, Rafsanjani considers Ahmad Khatami, Tehran’s interim Friday prayer leader, and a number of conservative figures, as inappropriate for the chairmanship.

Nevertheless, the aforementioned names don’t have a great chance of victory. Some of them, like Ayatollah Ahmad Jannati and Mohammad Yazdi, have already tried their luck, but they failed to attract enough votes compared to Rafsanjani. As a result, conservatives are seeking to nominate Shahroudi, a moderate who has a better chance at being elected chairman because of his relative acceptability among both conservatives and moderates.

Shahroudi was born and raised in Najaf, Iraq. The Iranian supreme leader, Ayatollah Ali Khamenei, appointed him in 1999 as the head of Iran’s judiciary, where he served until 2009. He was then appointed to the Guardian Council.

Since Mahdavi Kani's death, conservatives are directly and indirectly saying that Shahroudi will be elected as the assembly's new chairman. Ayatollah Ali Movahedi Kermani, head of the Combatant Clergy Association, said, “There are some speculations on the issue of new chairmanship of Assembly of Experts, but in my view, it is likely that Ayatollah Shahroudi will be appointed.”

In fact, conservatives are emphasizing and announcing their preferred choices for chairman in an attempt to portray Shahroudi’s election as a humiliating defeat for Rafsanjani, which in reality is the opposite.

According to a source who spoke to Al-Monitor on condition of anonymity, Shahroudi has a good relationship with Rafsajnani, and contrary to what it is thought, he won’t get along with hard-liners.

A sign of Shahroudi’s close relationship with Rafsanjani was seen during the last presidential election, during the Guardian Council meeting that resulted in Rafsanjani's disqualification as a candidate in the presidential election. According to two different narratives, Shahroudi either stormed out of the meeting or didn't attend a later meeting following Rafsanjani's disqualification.

Another potential candidate is Ayatollah Abbas Vaeze Tabasi, who serves as Khamenei's representative to the holy city of Mashhad. A source told Al-Monitor that Tabasi is unwilling to enter the game. Yet, even if Tabasi runs for chairman, his relationship with Rafsanjani is so good that, during the 2009 assembly election, he decided not to run in favor of Rafsanjani.

Despite all this, Rafsanjani still has the greatest chance of becoming assembly chairman. Rafsanjani’s adviser told Al-Monitor, “Ayatollah Hashemi hasn’t at all ruled out his participation in the election to determine the head of Assembly of Experts.” He added that Rafsanjani "has conditioned his candidacy to the situation before the election” and that he is "a serious choice and is impossible to be eliminated."

Rafsanjani’s victory appears to be highly likely should he decide to run. “Whoever competes with Hashemi Rafsanjani is defeated; Mr. Jannati ran for chairmanship, and others tried, but they failed," said Ayatollah Haeri Shirazi, a member of the Assembly of Experts. “Mahdavi Kani was elected due to Hashemi’s decision not to run, because of his respect for Kani. Kani himself said that Rafsanjani conferred this post to him.”

Finally, Rafsanjani’s candidacy depends on the other potential candidates. If Shahroudi or Tabasi step in, he probably won’t nominate himself. Nevertheless, ever since the creation of the Assembly of Experts, it’s been a tradition that before holding the board of directors election, chairman candidates reach an agreement, and on voting day, just one person nominates himself. Although, if Rafsanjani steps in, Shahroudi’s withdrawal and nomination of a conservative figure would be predictable.

Political observers believe that Rafsanjani's recent remarks, about whether he intends to participate in the forthcoming election, are similar to his words in the 2005 and 2013 presidential elections, in which he ultimately ran for president. If this comes true, we once again face a compelling and sensitive scene in Iran’s politics.