Who will be the next chair of Iran's Assembly of Experts?

Iranian conservatives and moderates alike have their sights set on the Assembly of Experts' chairmanship vote on May 24. 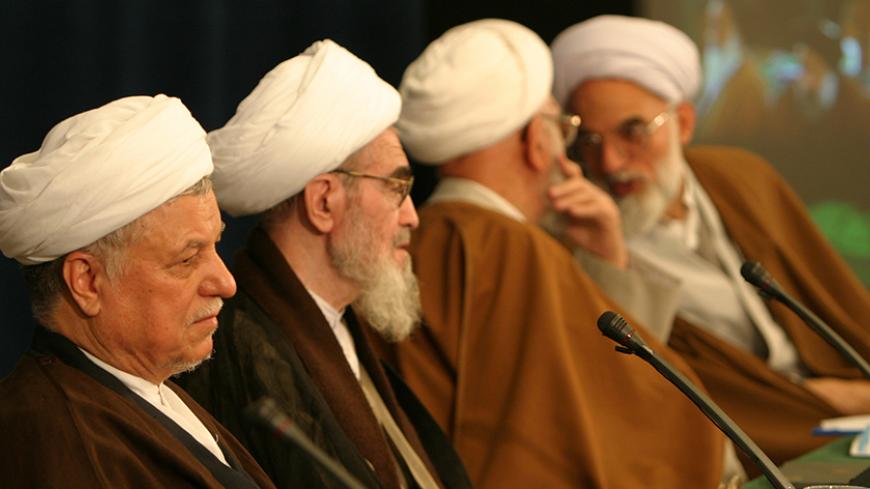 TEHRAN, Iran — Iranian voters shocked Principlists on Feb. 26 in elections for the Assembly of Experts, the clerical body tasked with choosing the supreme leader and supervising him. The list of the moderate Ayatollah Ali Akbar Hashemi Rafsanjani delivered a big blow to ultraconservatives as two prominent Principlists, Ayatollahs Mohammad Taghi Mesbah Yazdi and Mohammad Yazdi, lost their seats in the assembly.

Rafsanjani is currently chairman of the Expediency Council and had previously served as president for two terms. By contrast, Mesbah Yazdi had never held a governmental position but was considered the spiritual leader of the hard-line Endurance Front faction. Yazdi had been chairman of the Assembly of Experts at the time of the February elections and had formerly headed the judiciary.

The Tehran voting district has 16 seats in the 88-seat assembly, and Rafsanjani’s ticket won 15 of them. The ultraconservative Ayatollah Ahmad Jannati struggled to keep his spot in the assembly, but managed in the end to grab the 16th seat. Now, conservatives and moderates alike have their sights set on the assembly’s election of a chairman on May 24.

Many assume that Rafsanjani, who headed the Assembly of Experts in the past, will be a candidate, but according to a well-placed Iranian source who spoke to Al-Monitor on condition of anonymity, the ayatollah will not be trying his luck unless “he senses that danger is approaching.”

Indeed, a few days after the February polling, Yaser Hashemi, Rafsanjani's youngest son, said, “If he [Rafsanjani] determines that another person has the capacity to be chairman, it is highly unlikely that he will run.” In fact, according to Al-Monitor’s source, Rafsanjani and the moderates have asked Ayatollah Ebrahim Amini to step forward and seek the assembly's chairmanship.

Amini, 91, is a former Qom Friday prayer leader and is highly respected among all factions. That he appeared on both the Principlists’ and Rafsanjani’s ticket for the February elections serves as an indicator of his stature. Amini has moderate views and is close to Rafsanjani. Indeed, after the 2013 presidential elections, Rafsanjani offered him the leadership of the Expediency Council’s Center for Strategic Research, which Hassan Rouhani headed until assuming the presidency that year.

Of note, Amini has been critical of the Principlist and former President Mahmoud Ahmadinejad, publicly lamenting his actions on several occasions. In one instance, Amini, indirectly referring to what he characterized as Ahmadinejad’s dishonesty with Iranians, remarked, “Why do you say there is no problem in the country? Lying leads people not to have trust in government officials.”

Moreover, Amini is a supporter of Seyyed Hassan Khomeini, grandson of the Islamic Republic’s founder, Ayatollah Ruhollah Khomeini. “I urged Seyyed Hassan Khomeini to run for the [Assembly of Experts] elections, and I think the assembly will be more effective with his presence,” Amini revealed.

Meanwhile, according to some reports, conservatives have asked Ayatollah Mohammad Ali Movahedi Kermani, a temporary Friday prayer leader in Tehran, and Ayatollah Mohammad Momen, a member of the Guardian Council, to run for the assembly chairmanship. In this regard, the ultraconservative Ayatollah Ahmad Khatami said, “The next chairman, for at least the next two years, will be a person who has similar characteristics to [former Assembly of Experts Chairmen] Ayatollah Yazdi, Ayatollah [Ali] Meshkini and Ayatollah [Mohammad Reza] Mahdavi Kani.”

Added to the mix is speculation about the potential candidacies of the conservative Ayatollah Mahmoud Hashemi Shahroudi and the moderate Ayatollah Mohammad Emami Kashani.

Nevertheless, it is possible that no one will step forward if Amini decides to run. Such a scenario has played out in the past. Ayatollah Meshkini was chairman of the Assembly of Experts for 24 years because everyone respected and accepted him. Indeed, no one ever challenged his leadership of the assembly during his tenure.

Ghanbari, the analyst, told Al-Monitor, “In the case of Ayatollah Amini’s nomination, moderates and even hard-liners will support him. It is also possible that hard-line candidates will not run for the election when they realize that their rival will be Ayatollah Amini.” Yet, it is not clear whether Amini has accepted Rafsanjani’s reported proposal. Of note, Amini declined Rafsanjani’s previous offer to head the Center for Strategic Research, citing his old age.

A Rafsanjani candidacy is dependent most of all on who ultimately runs. The last time the Assembly of Experts held a vote for the chair, Rafsanjani did not want to run and was willing to stand to the side in favor of other moderate figures. After seeing the hard-liners put forth a candidate, however, he stepped forward, but ultimately lost to Yazdi.

Perhaps Rafsanjani's position has not changed since the last election for a chairman. As Yaser Hashemi said, “If he [Rafsanjani] senses that the chairmanship will fall into the hands of those who don’t deserve it, he will definitely run in the chairmanship election.” In the meantime, one can only wait to see whether Rafsanjani ultimately feels compelled to step up to the plate.