All of the moderates' calculations were correct ahead of the vote for the chairmanship of Iran’s Assembly of Experts — but they didn't account for one important factor: conservative mobilization. 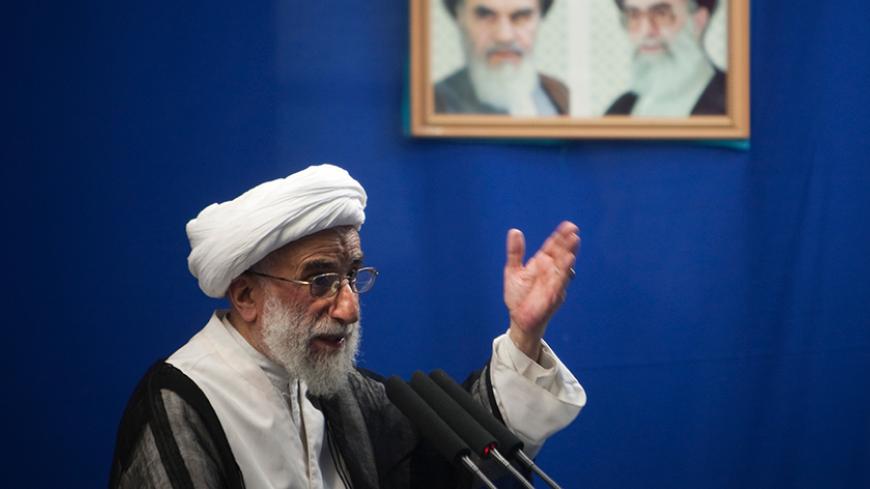 TEHRAN, Iran — The man who was on the verge of being eliminated in the recent Assembly of Experts election has been elected as the chairman of the clerical body. Conservative Ayatollah Ahmad Jannati won the May 24 vote with the backing of 51 of the assembly’s 89 members.

The vote was between Jannati, moderate Ayatollah Ebrahim Amini and conservative Ayatollah Mahmoud Hashemi Shahroudi. Amini was believed to be the candidate of Ayatollah Ali Akbar Hashemi Rafsanjani, who declined to run for the chairmanship, as Al-Monitor has previously reported.

Given that the composition of the Assembly of Experts did not overly change after the Feb. 26 election, Rafsanjani knew that his candidacy for the chairmanship would cost him. Indeed, one week before the vote, he publicly stated that he would not run. Of note, Rafsanjani lost the chairmanship to conservative Ayatollah Mohammad Yazdi last year.

A few days after the announcement of the results of the Feb. 26 election, Rafsanjani had asked Amini to step in to chair the assembly. At first, Amini refused. However, just days before the chairmanship vote, as pressure mounted on the 91-year-old, he agreed to nominate himself.

Rafsanjani had chosen the right man. He knew Amini was fully respected among all clerics in the assembly; more importantly, he is accepted by all sides in Iran — including the hard-liners.

These statements show that the moderates thought that the so-called Meshkini model would once again be repeated in the Assembly of Experts.

Ayatollah Ali Meshkini chaired the assembly for 24 years (1983-2007). Conservatives and moderates both held him in high esteem and did not once introduce another candidate during his three consecutive eight-year terms. The moderates believed Amini, who served as the deputy of Meshkini, had all the required qualities and features to easily gain the necessary votes in the assembly’s internal ballot. However, this time, the conservatives had revenge in mind over their defeat in the Feb. 26 election.

Despite speculations about Jannati’s potential nomination, senior conservative cleric Hossein Ebrahimi one week before the chairmanship vote stated that Jannati had refused to run. This enhanced the feasibility of the repetition of the “Meshkini model.” Nonetheless, when the moment of truth came, it turned out that Jannati was indeed a serious candidate.

All of the moderates’ calculations were correct, but they didn’t account for one important factor: conservative mobilization.

It is clear that the conservative victory in the assembly’s chairmanship vote was not the outcome of an overnight job. In fact, the very day that the result of the Feb. 26 election was announced, the conservatives — who had received a big blow — started mobilizing and planning so as to not lose the next phase of the battle. Moreover, it should not be ignored that the overall composition of the Assembly of Experts did not overly change — a fact that even Rafsanjani admitted.

Indeed, Rafsanjani was forced to put even conservative figures on his ticket ahead of the Feb. 26 vote, as many of his allies had been disqualified by the Guardian Council. In Tehran, which has 16 seats in the Assembly of Experts, Rafsanjani published a 16-member list with a marked presence of conservatives — though excluding three influential ayatollahs: Mohammad Yazdi, Mohammad-Taghi Mesbah-Yazdi and Jannati.

Nonetheless, voters in Tehran overwhelmingly cast ballots for Rafsanjani’s list, which resulted in Mesbah and Yazdi being eliminated. However, Jannati came 16th, finding his way into the Assembly of Experts. More broadly, across Iran, Rafsanjani’s list was successful and obtained 52 out of the assembly’s 89 seats.

Thus, while the outcome of the Feb. 26 election was a symbolic victory for the moderates, it did not change the fact that the conservatives are still the majority. Of note, based on the outcome of the Feb. 26 vote, it could be argued that had all moderate candidates been approved by the Guardian Council and put on Rafsanjani’s ticket, they could have had the majority in the Assembly of Experts right now.

The hard-line Javan daily wrote, “Those who claimed they were the winners of the election faced a well-deserved answer. The one planned to be eliminated became the chairman.” Tehran interim Friday prayer leader Ayatollah Ahmad Khatami said, “The assembly members are part of the people and what they did [by electing Jannati] was in fact done by the people themselves. This was a slap in the face of the United States and Britain.”

In response, moderates and Reformists have stated that the conservatives’ victory was achieved because of the disqualification of important figures such as Seyyed Hassan Khomeini — the grandson of Ayatollah Ruhollah Khomeini, the founder of the Islamic Republic. In this vein, the Reformist Aftab Yazd newspaper ran the headline, “Khomeini didn’t come, Jannati won.”

Moreover, a week before the May 24 chairmanship vote, Rafsanjani downplayed the importance of the internal election, saying, ”There is no need for me to be the chairman of the assembly. Being a member is good enough, and to me, it makes no difference whether to be a member or the chairman. The assembly doesn’t have many activities and only holds two sessions a year.”

Ultimately, the conservative mobilization appears to have been part of a bigger plan: to make people feel hopeless and thus lower the turnout in the upcoming 2017 presidential election. Apparently in response to the latter, Ahmad Shirzad, a Reformist analyst, told Iscanews, “The hard-liners’ moves cannot make the people lose hope, because the people have shown time and again that at times of high despair, they will come out and take part in elections — just like in the February [26] polls.”