Pre-election sniping ahead of the Assembly of Experts vote heats up as Ayatollah Ali Akbar Hashemi Rafsanjani’s ticket is labeled “British.” 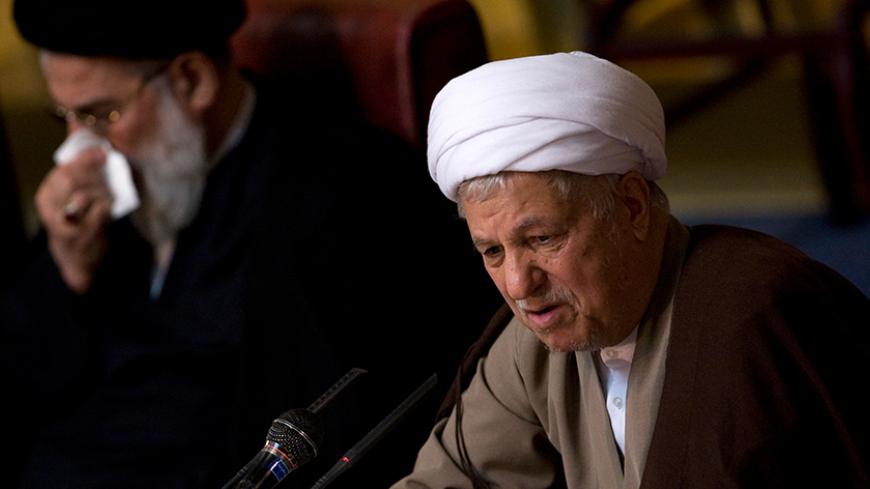 Ali Akbar Hashemi Rafsanjani, chairman of the Assembly of Experts, delivers the opening speech during the biannual meeting of the assembly in Tehran, Sept. 22, 2009. - REUTERS/Caren Firouz

TEHRAN, Iran — In the coming days, Iran will be holding elections for its Assembly of Experts, and as such, every side is maneuvering to gain as many votes as possible. The main race is between the camps of moderate Ayatollah Ali Akbar Hashemi Rafsanjani and that of ultra-conservative Ayatollah Ahmad Jannati.

President Hassan Rouhani, Intelligence Minister Mahmoud Alavi and highly respected Ayatollah Ibrahim Amini are among the most prominent figures on Rafsanjani’s 16-person ticket (known as People’s Experts). Hassan Khomeini — who was disqualified from running in the elections and is also the grandson of the Islamic Republic’s founder, Ayatollah Ruhollah Khomeini — appears on the campaign posters for Rafsanjani’s ticket. Khomeini has voiced tacit support for the moderate ticket, saying, “We should vote for those who don’t close their eyes to oppression.”

Rafsanjani’s list has come under serious attack by hard-liners after calls emerged on social media networks for people to take part in the elections to thwart the entry of the hard-liners from the Assembly of Experts.

The Tehran voting district accounts for 16 of the assembly’s 88 seats, and as such, Ayatollah Rafsanjani has repeatedly urged people and his supporters to vote not only for him but for all of his 16-person ticket. If this occurs, Jannati and the four abovementioned hard-liners will for the first time not be able to enter the assembly. This prospect has caused serious anxiety among the hard-liners, prompting them to look for ways to counter it.

Amid the launch of the “No to these 5” (hard-liners on Jannati’s ticket) campaign on social media, prominent dissident Akbar Ganji and BBC Persian separately published articles that examined and analyzed this strategy to sideline hard-liners. Hard-liners were quick to seize on the latter as an opportunity to hit back at Rafsanjani, thereby undermining the “No to these 5” campaign.

Hard-liners subsequently started branding the “No to these 5” campaign — as well as Rafsanjani and leading members of his list — as “English” and directed by the BBC. In this vein, the hard-line Vatan-e Emrooz newspaper wrote, “The plans for preventing Ayatollah Jannati, Yazdi and Mesbah [Yazdi] from getting into the assembly are being managed by the BBC. The formulas of this British channel and its staff for not allowing these clerics to get into the assembly signal their long-term plans.” Vatan-e Emrooz added, “They are seeking to create a new makeup in the Assembly of Experts, one which gives Rafsanjani the upper hand.” Moreover, the hard-line daily published a picture of the five hard-line ayatollahs and deemed them “anti-British.” Gen. Hassan Firouzabadi, chief of staff of the Iranian military, has also harshly reacted to this controversy, saying, “If those who are being supported by Britain and the United States do not condemn these two countries’ meddling in Iran’s elections, they are considered [tried and] convicted.”

Khatami, the interim Tehran Friday prayer leader who is targeted by the campaign, has also spoken out. “British and foreign media outlets are asking our people not to vote for Jannati, Yazdi, Mesbah [Yazdi], Alamolhoda and I. This is none of your business; you nosy people should know that these five are the top choices of our people,” Khatami asserted, adding, “My sin is that I have given the seditionists a hard time during my Friday sermons.” One day later, Khatami stated, “I’m sure that their [Rafsanjani’s] list won’t be able to attract votes, as they are thought of as supporters of the sedition [unrest in the aftermath of the disputed 2009 presidential election] and are as hated as the [former] shah.”

Amid this outcry, news outlets associated with the moderates have defended Rafsanjani while lashing out at Ganji. Their line of reasoning is that Ganji — who is known as a staunch opponent of Rafsanjani — is in effect cooperating with the hard-liners in order to counter the moderate ayatollah. “Ganji is crusading to name himself as the creator of the famous idea [“No to these 5” campaign] and to give hard-liners a gift so that they can shout and say this idea [the campaign] has been nurtured by an anti-Islamic Republic figure. Therefore, they [hard-liners] can say that whoever buys into this idea [the campaign] is on the same side as Ganji,” Entekhab News wrote.

Rafsanjani has not shied away from stepping in amid the harsh sniping, saying, “They [the hard-liners] presently have no excuse to rage against us and insult us. Thus, they [the hard-liners] attribute phrases like ‘inside man’ and ‘British’ to the old revolutionaries.” He added, “These figures have been defeated by the people and are now seeking to exact [their] revenge on the administration and President Rouhani.” Last, but certainly not least, Rafsanjani’s Instagram page has published a short text about how prominent moderate Ayatollah Mohammad Hosayn Beheshti, who was assassinated by the Mujahedeen-e-Khalq organization in 1981, was also accused of being “British” by hard-line elements.

Whether the controversy over the “English list” will ultimately keep voters from going to the ballots will be clear come election day Feb. 26. Until then, it appears that hard-liners will remain anxious about the prospect of voter mobilization leading to their exit from the assembly.