Beyond a second term, President Hassan Rouhani is seemingly setting his sights on another key Iranian state institution — the Assembly of Experts. 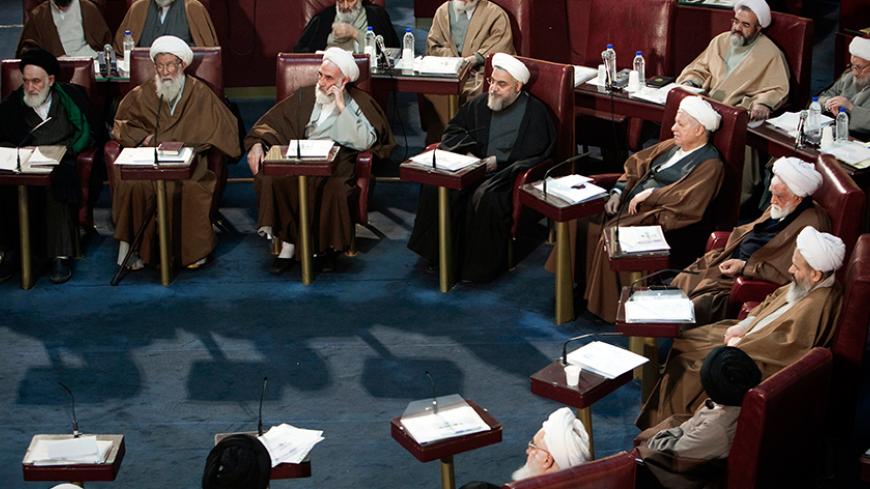 TEHRAN, Iran — Beyond seeking a second term, President Hassan Rouhani is seemingly setting his sights on another key Iranian state institution — the Assembly of Experts. This important clerical body supervises the performance of the supreme leader and is also tasked with one day selecting the successor to Supreme Leader Ayatollah Ali Khamenei.

Many in Iran’s inner political circles are almost certain that Rouhani will run for the Assembly of Experts, although the expectation is that his candidacy will not be officially announced until the registration period for the vote arrives. Starting Dec. 17, it lasts for six days.

Mohammad-Javad Haghshenas, a Reformist analyst, told Al-Monitor, “Before winning the presidential election, Rouhani was a member of the Assembly of Experts, and I think it is highly likely that he will run in the election again.” He added, “There is no legal obstacle in the way of Rouhani’s candidacy, and I emphasize that a decision to not step forward is really improbable.”

Rouhani’s potential candidacy for the Assembly of Experts won’t be his first. He has served in it twice as a representative of the cities of Semnan and Tehran. What is different this time is the hot water Rouhani will probably end up in if he announces his candidacy, considering hard-liners’ discontent with both his domestic and foreign policy. Indeed, they will likely criticize the president for Iran’s dire economic situation, with particular reference to the potential zero growth that the economy is facing.

In an interview with Al-Monitor, Heshmatollah Falahatpishe, a conservative political analyst and a former lawmaker, said, “Rouhani’s administration has made some unfulfilled promises, and the president’s potential decision to run for the Assembly of Experts’ election may produce some criticisms.” If he chooses to run, Rouhani would not be the first president who has sought to nominate himself for an Assembly of Experts election. Ayatollah Ali Akbar Hashemi Rafsanjani, who served as president from 1989 to 1997, was also a member of the assembly during his two terms in office.

Rouhani is considered to have been a disciple of Rafsanjani since the beginning of the 1979 Islamic Revolution. He has served as Rafsanjani’s right hand in various positions over the years, particularly during the 1980-1988 Iran-Iraq War. Of note, Rafsanjani announced his nomination for the assembly vote a few months ago. Thus, Rouhani’s likely candidacy in the election would join that of Rafsanjani and possibly Ayatollah Seyyed Hassan Khomeini, the grandson of the founder of the Islamic Republic, Imam Ruhollah Khomeini. Together, they form a strong trio vis-a-vis hard-line conservatives Ayatollah Mohammad Yazdi, Ayatollah Mohammad Taqi Mesbah-Yazdi and Ayatollah Ahmad Jannati. In fact, the main contest will likely be between this moderate trio and the hard-liners.

After the 2014 death of Ayatollah Mohammad Reza Mahdavi Kani, then chairman of the Assembly of Experts, an internal election was held in which moderate Rafsanjani and ultraconservative Yazdi were the main candidates. Against most predictions, Yazdi turned out to be the winner. Along this vein, Haghshenas, the Reformist analyst, told Al-Monitor, “The competition between moderates and hard-liners over the chairmanship of Assembly of Experts will rekindle.”

Rouhani’s likely candidacy will have two important aspects. It would be the first time to have nominated himself for an Assembly poll while serving as president. Moreover, the election — and the assembly itself — will be more politicized and competitive, given that from the first days of its creation, its juridical dimension has been highlighted. Explaining the politicization of the assembly, Saeed Leylaz, a prominent Reformist political analyst, told Al-Monitor, “The Assembly of Experts has no importance except picking the next supreme leader, and that makes this election more important than the other elections in Iran.”

However, the politicization of this clerical body was first triggered following Ayatollah Ali Meshkini’s demise in 2007, as hard-liners then tried to prevent Rafsanjani from chairing the assembly. Of note, since day one, the assembly’s members have not sought to nominate themselves for its leadership but rather sought consensus on one person. Indeed, this explains the 24-year chairmanship of Meshkini.

Now with Rouhani’s possible assembly candidacy while serving as president, in addition to the likely expanded presence of moderate candidates, the chairmanship of the Assembly of Experts may very well end up in the hands of the moderates once again.

Reformist political analyst Leylaz told Al-Monitor, “Every vote for Rouhani as the moderate president of Iran is tantamount to voting for the whole moderation camp.” Furthermore, according to Falahatpishe, the conservative former member of parliament, “Rouhani’s nomination will embolden the moderation camp in the election, intensifying the competitive atmosphere.” There is also another potential dimension to Rouhani’s likely candidacy in the coming elections. One Reformist political analyst who spoke to Al-Monitor on condition of anonymity said, “There is the possibility that Rouhani may attempt to chair the Assembly of Experts.”

Many have described the coming assembly election as one of the most critical after the Islamic Revolution. In this vein, Rafsanjani has called for a high voter turnout, from “nationalists” to “revolutionaries.” This is driven by the view among moderates that their chances will improve the more voters cast their ballots in the election.

Unlike previous rounds of assembly elections, the simultaneity of the coming poll with the parliamentary elections, in addition to the issues mentioned above, may lead the assembly vote to gain unprecedented attention — and voter participation. For now, one can only wait for Dec. 17 to arrive to get a closer glimpse at where the assembly may be headed.