Hard-liners' attacks against the grandson of the Islamic Republic's founder may prove futile in their effort to derail his candidacy for the Assembly of Experts. 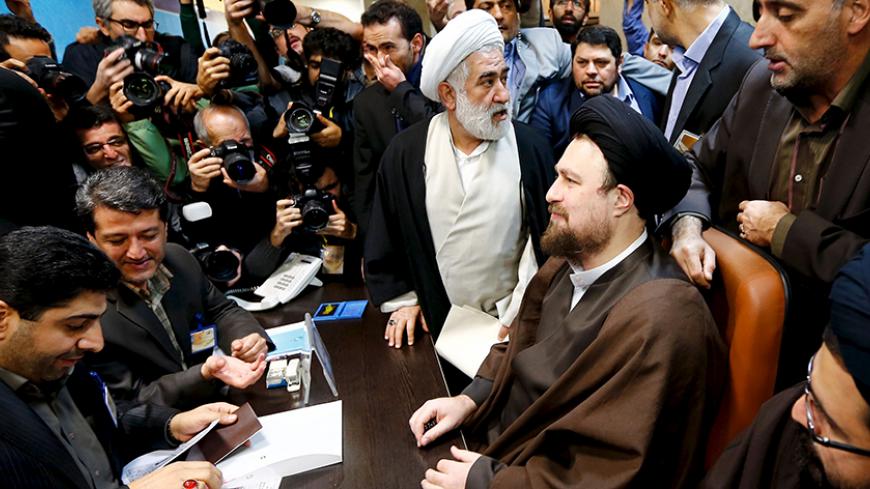 Hassan Khomeini (C, in chair), 43, a grandson of Iran's Ayatollah Ruhollah Khomeini, registers for February's election of the Assembly of Experts, the clerical body that chooses the supreme leader, at the Interior Ministry in Tehran, Dec. 18, 2015. - REUTERS

TEHRAN, Iran — Following heated speculations, the most prominent grandson of the founder of the Islamic Republic of Iran, Seyyed Hassan Khomeini, has registered to run for a seat on the Assembly of Experts. The clerical body is tasked with overseeing the performance of the supreme leader and choosing his successor. Polling for the assembly’s 88 seats will be held on February 26, alongside elections for Parliament. Assembly members are elected for eight-year terms. Khomeini’s candidacy received a warm welcome from conservatives, moderates and Reformists, but has met with a barrage of harsh criticism from hard-liners, who have launched a campaign against the 43-year-old ayatollah and grandson of Ayatollah Ruhollah Khomeini, founder of the Islamic Republic.

Hard-liners have brought up a series of concerns that they say should compel the sidelining of Khomeini from the race for the assembly. For instance, they claim that Khomeini is part of an alleged plot by the Expediency Council chairman, Ayatollah Ali Akbar Hashemi Rafsanjani, to seize control over the influential assembly. Indeed, Hossein Shariatmadari, the editor of the ultra-conservative newspaper Kayhan known for his hard-line positions, has alluded to such a scheme in an op-ed, asserting, “Seyyed Hassan Khomeini’s name and position are being used to hide the plans of the troublemaker groups that are tied to foreign [governments] and received a big blow in the proxy unrest of 2009 [following presidential elections]." Shariatmadari took a direct swipe at Khomeini in his Kayhan editorial, writing, “People like [the executed Saudi Shiite] Sheikh [Nimr] al-Nimr and [the detained Nigerian Shiite] Sheikh [Ibrahim] Zakzaki are the real grandsons of Imam Khomeini.”

Moreover, the hard-line cleric Mehdi Taeb addressed Khomeini, telling an audience in the central city of Yazd, “Rafsanjani called you Allamah [an honorific for Islamic scholars]. This means he is taking advantage of you. Why aren’t you paying attention and showing any reaction to this issue?” Also in this vein, Hossein Jalali, head of the office of conservative Ayatollah Mohammad Taghi Mesbah, has claimed to media, “Rafsanjani is trying to start a new seditious movement with the family of Imam Khomeini.”

Such sentiments aside, on the day Khomeini signed up to run in the elections, he told reporters at a press conference after his registration that he would be campaigning as an “independent candidate.” Mohsen Gharavian, another candidate for the Assembly of Experts, pointed out to Al-Monitor, “Seyyed Hassan Khomeini doesn’t belong to any group or political party,” and added, “His emphasis on ‘being independent’ means he is doing his best not to tarnish the image of his late grandfather among people.”

Another hard-line argument against Khomeini’s candidacy is that the late Khomeini had prohibited his family from entering the political arena. However, some who were close to the former supreme leader have refuted this claim on the basis that Ahmad Khomeini, the father of Seyyed Hassan, was nominated for Assembly of Experts’ elections and succeeded in winning the votes of people.

Ultra-conservatives have expressed their opposition to the possible presence of Khomeini in the assembly, arguing that he lacks sufficient clerical knowledge to be part of the influential body. Thus, they contend, he will not be able to obtain the approval of the Guardian Council, which is tasked with vetting candidates and is headed by the conservative Ayatollah Ahmad Jannati.

“Seyyed Hassan Khomeini has competence in terms of learning,” Ayatollah Seyyed Jafar Karimi, chairman of the Council for Estefta’at of the Supreme Leader, which handles religious inquiries addressed to Ayatollah Ali Khamenei, told Iranian media. He added that he has read Khomeini’s writings and is assured of his knowledge. Meanwhile, Grand Ayatollah Abbas Mahfouzi has publicly described the younger Khomeini as sufficiently learned for the assembly. Khomeini currently teaches dars-e kharej, the highest level of Islamic jurisprudence at the Qom seminary.

The most noted, and perhaps most important, objection to Khomeini’s candidacy expressed by the hard-liners is that it is in essence causing a rift within the Islamic Republic and is a challenge to Ayatollah Khamenei. Ayatollah Mesbah Yazdi, the spiritual leader of the hard-line Endurance Front, said, “The enemies are trying to hold a referendum to dismiss the supreme leader.”

Khomeini has denied these objections, stating at a press conference after his registration as a candidate, “My candidacy is with the aim of pursuing what Imam Khomeini said about defending until death the foundations of the Islamic Republic.” He added, “The concept of velayat-e faqih [rule of the guardian jurist] is among the issues that we should be committed to and also reinforce its tenets until our last breath.”

According to Gharavian, the hard-liners through their various allegations are simply trying to negatively influence the Guardian Council’s view of Khomeini. Indeed, it appears that the objections being raised by them are voiced with the goal of persuading the Guardian Council to nix Khomeini’s candidacy. According to a source who spoke to Al-Monitor on condition of anonymity, however, Khomeini consulted with the supreme leader before announcing his candidacy, and Khamenei did not oppose it. If accurate, this is of crucial importance.

More broadly, some conservatives, including Ayatollah Jannati and Ayatollah Mohammad Yazdi, have reacted negatively to the unusually high number of candidates, a total of 801, for the assembly elections. Their statements are being closely watched, as Jannati's and Yazdi’s memberships on the Guardian Council could affect the vetting process. Jannati said at the Tehran Friday prayers, “The number of candidates is questionable to me. Some of these people don’t differentiate between the Holy Quran and a juridical book.” In this vein, Yazdi has also publicly stated, “About 800 people have signed up for the assembly elections, but only 88 of them will find their way to the assembly. Thus, the high number of candidates signals that there are hidden agendas behind this [high number].”

In sum, it appears that based on Jannati’s remarks, the number of candidate disqualifications may be high. However, the likelihood of Khomeini’s candidacy being approved is high. As Gharavian told Al-Monitor, “It is highly unlikely that the Guardian Council will disqualify Seyyed Hassan from running in the elections. He is the prominent and senior grandson of Imam Khomeini, and he has been approved by various grand ayatollahs in Qom in terms of having clerical knowledge.”