Who will choose Iran's next supreme leader?

Hassan Rouhani and Ali Akbar Hashemi Rafsanjani both addressed the Assembly of Experts' role in choosing the next leader as they registered to run. 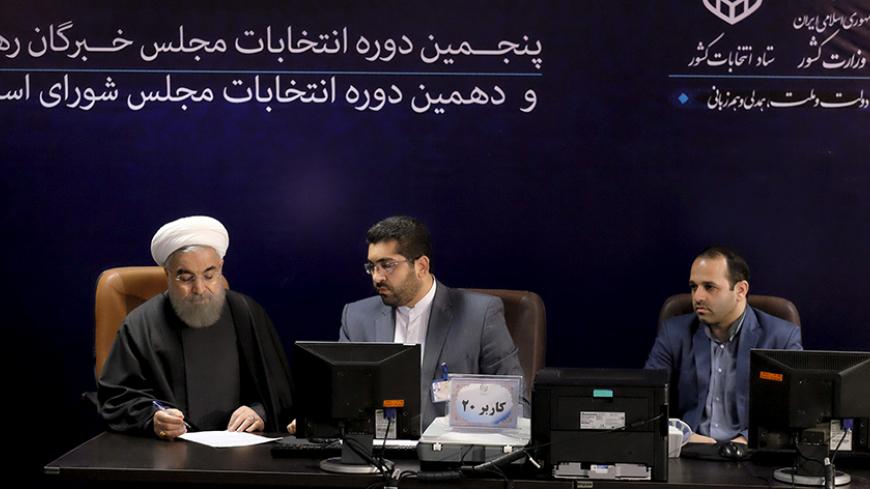 The registration process for both the parliamentary and Assembly of Experts elections in Iran has begun, and high-profile candidates, accompanied by their entourage and the media, have been trickling into the Interior Ministry building. After registering on Dec. 21 to run for the Assembly of Experts, President Hassan Rouhani and Ayatollah Ali Akbar Hashemi Rafsanjani, head of the Expediency Council, reminded voters of the body's function in electing the supreme leader.

Speaking to reporters after his registration, Rafsanjani said in these elections people will be “marking their fate for years to come.” The Assembly of Experts serve for eight years, and it is possible this body may be required to elect the next supreme leader of Iran. Rafsanjani praised the past performance of the Assembly of Experts, saying that in electing Supreme Leader Ayatollah Ali Khamenei in 1989 they found “the most appropriate person after Imam Khomeini.”

Speaking to reporters, Rouhani said that the supreme leader position is the most important pillar of the Islamic Republic of Iran and that, when it is necessary, the Assembly of Experts is prepared to make sure there is no gap in filling this position.

Rouhani also stressed the importance of having women run in the elections, saying, “The makeup of parliament for us has importance in the world. It doesn’t make a difference if a representative is male or female, but having a significant number of women in parliament has importance for world public opinion.”

Of the current 290-member parliament, there are nine female representatives, with most of them belonging to conservative factions that have hardly petitioned for greater women’s rights. Of the 86-member Assembly of Experts, there are no female members.

So far the biggest surprise has been the registration for the Assembly of Experts by Ayatolla Seyyed Hassan Khomeini, grandson of the founder of the Islamic Republic of Iran, former Supreme Leader Ayatollah Ruhollah Khomeini. Khomeini said that he would be entering the elections as an independent. Despite this claim, however, Reformist media universally welcomed Khomeini’s intention to run.

Shargh Daily’s front page Dec. 21 reported that Ayatollah Seyed Jafar Karimi, chairman of the Council for Estefta’at of the Supreme Leader, which handles religious inquiries addressed to the supreme leader, endorsed Khomeini’s political and religious qualifications. The conservative Guardian Council must approve the qualifications of all candidates who have registered for the parliamentary and Assembly of Experts elections.

Khomeini’s entrance into politics is welcome news for Rouhani and Rafsanjani. Both have been the target of hard-liners, and they will need like-minded allies such as Khomeini.

Conservative and hard-line officials have also registered for the elections. Ayatollah Mohammad-Taghi Mesbah Yazdi, who is the spiritual father of the hard-line group the Endurance Front, also registered for the Assembly of Experts elections. Member of parliament Hamid Rasaei announced on his Instagram page that Ruhollah Hosseinian and Morteza Agha-Tehrani would run in the Assembly of Experts elections. In an indirect reference to Rafsanjani’s first name, Akbar, which means “greater,” Rasaei warned of a “greater sedition” in the upcoming elections. Hard-liners call the protest of Reformists contesting the 2009 presidential elections “a sedition.”

A serious concern among hard-liners is that Rafsanjani would attempt to steer the Assembly toward his own policies by stacking the body with his own political allies in order for them to have a greater say in choosing the next supreme leader. While Rafsanjani and Khamenei have remained cordial publicly, the two have been at odds over a number of domestic and international issues. Rafsanjani had recently been harshly criticized for suggesting that the Assembly of Experts has the right to “supervise” the supreme leader rather than just elect him.